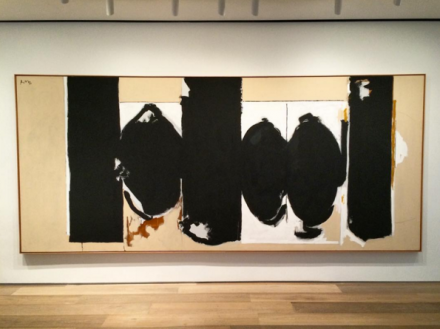 Robert Motherwell, Elegy to the Spanish Republic (1970), via Art Observed

Few series of work are as immediately recognizable as Robert Motherwell’s Elegies, his bold collection of compositions, inflected with broad strokes of black meant as a public lament to the bitter civil war that upended the Spanish Republic in the years leading up to World War II, and which saw the installation of fascist leader Francisco Franco.  The works, which Motherwell would continue until his death in 1991, are a striking visual critique, great swaths of black obliterating his spare compositions in white, blue and other subdued grounds, as if the war itself has overshadowed the artist’s own painterly hand blotting out his compositions with the tense, recurring figures of bars and blots of paint. 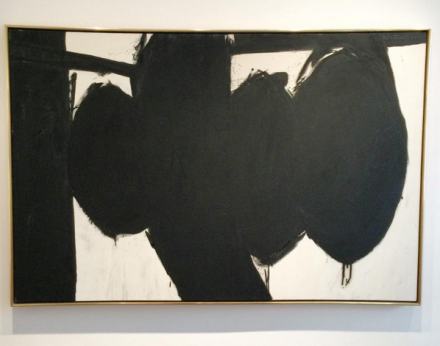 Robert Motherwell, Elegy to the Spanish Republic No. 84 (1962), via Art Observed

Motherwell’s ongoing practice in the Elegies is the subject of Dominique Lévy’s winter show this month, culling together a set of eighteen paintings that span the artist’s work in the series from 1954 up to 1989.  While by no means complete, the exhibition is a powerful review of the series, allowing a series of comparisons that show both his continued resolve to the memory of the war, and his creative evolution over the course of his career.  Combining small-scale pieces, sketches and full-scale compositions, the show is equally notable for its subtle incorporation of Motherwell’s process and procedure in the works, highlighting both the evolution of his recurring visual themes, and the variations of execution that define each piece. 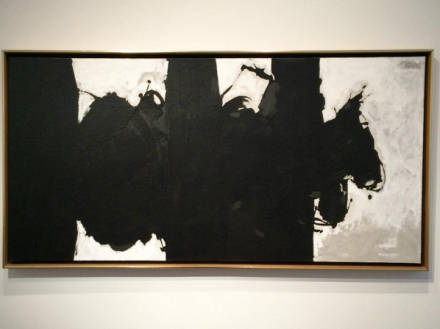 At turns furious and resigned, the works in the exhibition use the repeated form of black bars and slurs of paint as a recurring signature of the series, a commanding image that draws its inspiration from the Franco regime’s callous disregard for civilian casualties, bombing cities and towns that caused thousands upon thousands of needless deaths (and the inspiration for Picasso’s Guernica in turn).  The interruption of life, and the regression of human civilization, as the artist himself termed it, becomes the central element in the works, blotting out any other subject or figurative element that the canvas may have carried.  In turn, the artist insistently recreates the void of death, of destruction and war, that so dramatically altered the landscape and future of the Spanish nation. 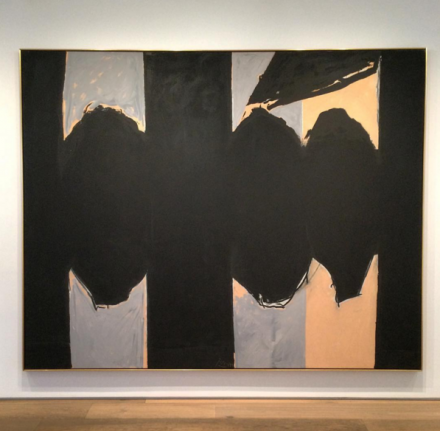 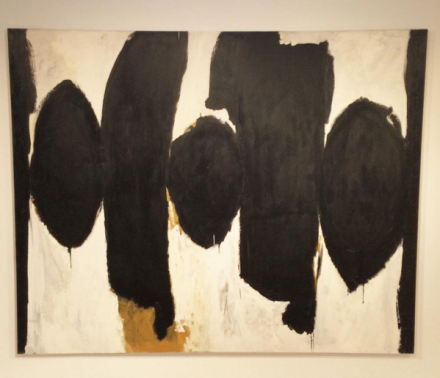 The visceral, tragic energy of these works cannot be avoided, and their stark use of color and contrast make for a fitting visual metaphor to the bloody, genocidal impulses of the fascists in the Spanish nation.  Motherwell’s practice with the Elegies is a disturbing reminder of the human costs of war, countered only by the artist’s impressive economies of scale and paint, underscoring why the works have become so indicative of Motherwell’s particular creative mastery.

Elegies to the Spanish Republic is on view through January 9th. 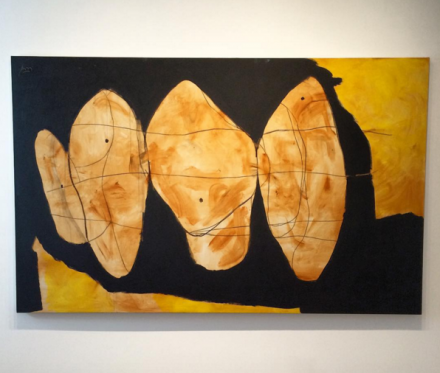 This entry was posted on Thursday, January 7th, 2016 at 12:00 am and is filed under Art News, Featured Post, Show. You can follow any responses to this entry through the RSS 2.0 feed. You can leave a response, or trackback from your own site.