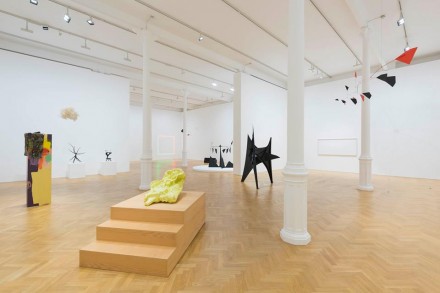 The Calder Prize 2005-2015, now on view at Pace Gallery in London, explores the influence of artist Alexander Calder in relation to the work of six contemporary artists, each of whom were awarded a prize in the former’s name.  Now through March 5, the five winners of the Calder Prize to date are featured in conversation with Calder’s own work.  The artists awarded the Calder Prize are seen to be continuing Calder’s legacy by imagining new and innovative directions for sculpture, among them Tara Donovan (2005), Žilvinas Kempinas (2007), Tomás Saraceno (2009), Rachel Harrison (2011), Daren Bader (2013), and Haroon Mirza (2015). Working in impressively divergent media, the artists are united by their common vision to push the limits of material through variations on space and time in their work, a point that unifies them with Calder’s vision.

Calder is credited with creating the mobile, a moving sculpture that hangs delicately balanced, suspended shapes in relation to air movement or touch.  Rejecting traditional material and instead using industrial tools such as sheet metal or wire, he produced wire figures that resemble drawings hanging in space, as well as monumental stationary sculptures.  The forms that Calder created embody a kind of weightlessness that forever altered the landscape of sculpture, and inspired a new definition of art, beyond simple conceptions of material and composition. His influence on sculpture and art making is widely felt today and resonates strongly with the work of the artists featured in this exhibition. 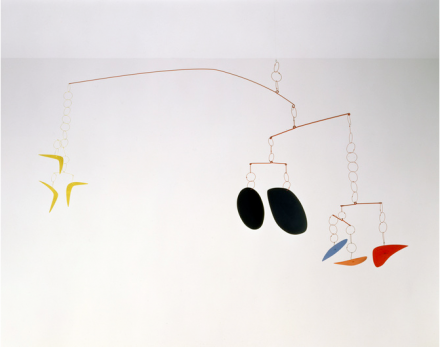 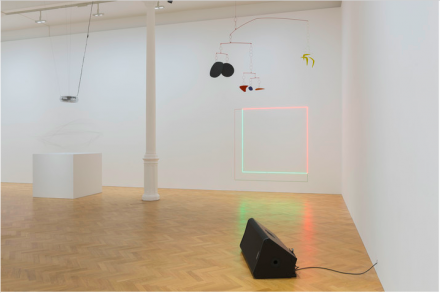 Calder’s unorthodox approach to material links the work of these artists, from Rachel Harrison’s sculpture Silent Account to Kempinas’ delicate, dynamic Flux, in which the artist animates a looped strip of magnetic tape suspended in the air with a fan.  Tara Donovan, the Calder Prize’s inaugural recipient, creates large-scale forms from readily available industrial material that resemble or imitate natural forms. In her new work, she has assembled and animated a set of Slinkies (coiled metal toys) into undulating, seemingly alive forms. Haroon Mirza’s Light Work iii, on view in the first floor gallery, complicates the distinctions between noise, sound and music while challenging understandings of everyday objects. A common thread that runs through the works featured in this exhibition is a concern with animating material in space and questioning the material conditions, objects, and relations that inform how we think about sculpture and define art in general. 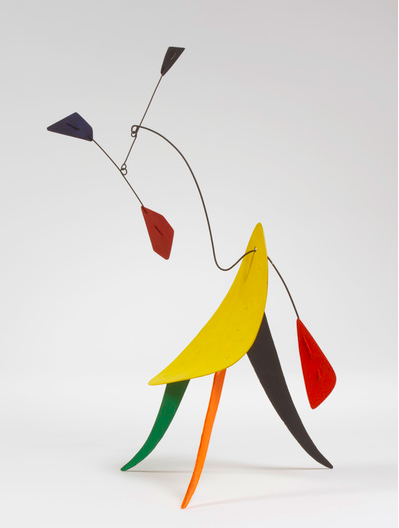 In addition to the artwork of these five contemporary artists, a number of Calder’s large-scale sculptures will be exhibited as well. The Tree (1960), Boomerangs (1941), and Trois Pics (1967). The eight-feet maquette of Trois Pics stands as a model for the monumental version of the stabile that stands at the center of Grenoble, France, created to commemorate the 1968 Olympics.  Also included is an untitled, brightly colored mobile from 1942 that the artist gifted to his friend, Jean Hélion.

The show concludes on March 5th.

This entry was posted on Monday, February 29th, 2016 at 1:00 am and is filed under Art News, Featured Post, Show. You can follow any responses to this entry through the RSS 2.0 feed. You can leave a response, or trackback from your own site.