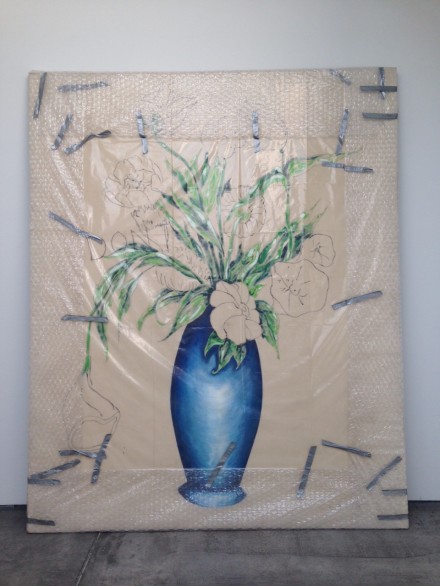 Jonathan Borofsky, Acrylic on Unprimed Canvas with Bubble Wrap and Duct Tape at 2,680,377 (1978-80), all images via Osman Can Yerebakan for Art Observed

A large scale exhibition of historic work by artist Jonathan Borofsky is currently on view at Paula Cooper Gallery.  Globally recognized for his large-scale, representational and industrious sculptures exploring and elaborating on the human condition in performative gestures, Borofsky’s work here exposes his cognition and subjective outlets.  Compiled of modest scale sculpture, painting and print, the selection promises a studious route to the more remote corners of the artist’s practice. 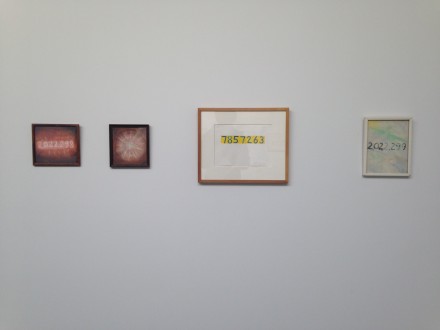 Although the exhibition spans several decades and artistic touchstones, one piece that genuinely encapsulates the prevailing tone of Borofsky’s oeuvre is Counting, an almost thirty-seven inch height stack of paper, each sheet numbered by the artist to track days passing one after another.  A column-like work that is still in progress, this voluminous pile escalates as time flows, confronting notions of sculpture, installation and drawing while illustrating an artist’s obsessive and tempestuous drive to command rebellious time. 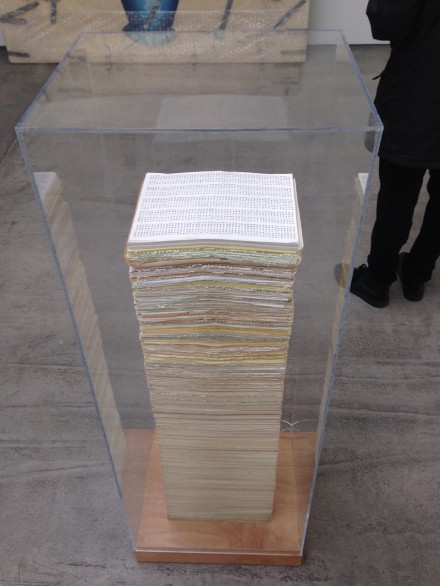 Certainly, this ardent fascination with time stands as one of the main threads in Borofsky’s practice, while another one is his reinterpretation of the numeric patterns that spill forth from it.  Borofsky, who moved to New York in the ‘60s upon completing his MFA at Yale, compiled a series of artistic ideas to be conceived in the future, gathering the works in his Thoughts Book, a collection of ideas that never matured into execution.  Later came his habit of numbering a page everyday, followed by his drawings, for which he placed a number in substitution for his signature.

Indicating the corresponding numeric equivalent of the day Borofsky created the said art work, these figures reach towards the millions, and spread throughout the exhibition. Untitled at 2,022,298, in beaming red hue, vividly immortalizes a bygone day in the ‘70s (the work is dated as circa 1970), or Untitled at 7,857,263, painted in green on yellow coat frames during a single day in 1995. 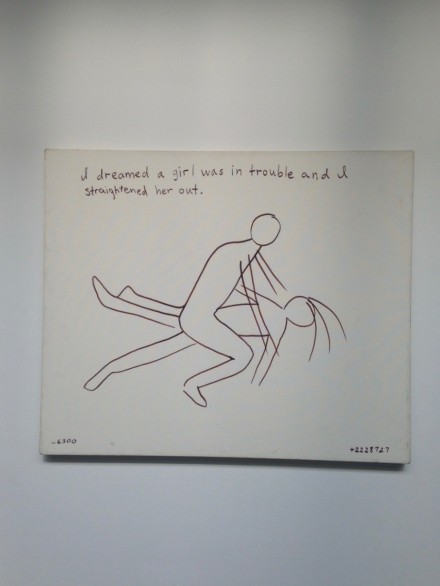 Horizontally narrated throughout a six panel oil on canvas is Dream #1 (Supermarket) at 1,944,821, as the Maine-based artist’s recollection of his dream where, as a child, he goes to the supermarket accompanied by his mother.  This comic-like work, alongside many others, are the outcomes of Borofsky’s tracking of his dreams on a notebook he kept by his bed, and they are each titled and signed based on the day he created them.

Subjective narrative touches at such a persistent scale is impressive, particularly when supplemented by the artist’s fanatic reliance on his subconsciousness.  This is especially notable for an artist who is extensively celebrated for his mammoth-scale public sculptures.  Here, his modest drawings, in which the artist embarks on a variety of adventures, from bizarre to quirky, echo distinct stylistic elements or moments in his public installations, aligning with their primitive, anonymous anatomies to engage in everyday acts as radiant forms of inspiration and communication.

Jonathan Borosfky is on view at Paula Cooper Gallery through February 13, 2016. 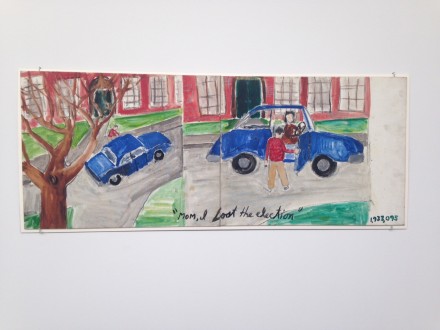 This entry was posted on Sunday, February 7th, 2016 at 2:42 pm and is filed under Art News, Featured Post, Show. You can follow any responses to this entry through the RSS 2.0 feed. You can leave a response, or trackback from your own site.