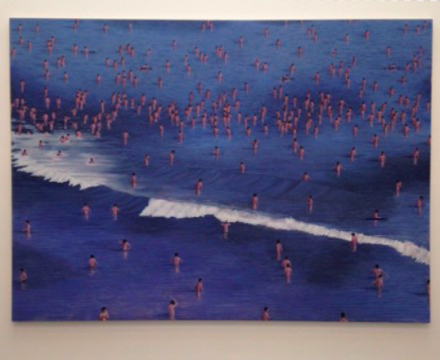 Tucked inside a single room at Petzel Gallery is Waterworld, a humbly scaled exhibition, yet impressively scaled work by New York-based, German artist Thomas Eggerer.  The artist’s work has long been shown in this context, showing only a few works at a time in their enthrallingly large-scale dimensions that further the artist’s ongoing aesthetic tendencies and focus on each meditative, impressively detailed scenario. 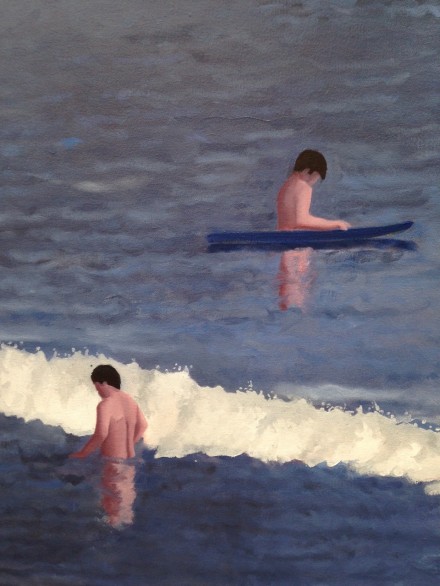 Eggerer’s conveyance of visceral desire and its reflections in his meticulous, labor-oriented approach, find themselves skillfully condensed in Waterworld, a work which was first unveiled at the Lyon Biennale in 2015.  Ambitiously populated with male figures, all seemingly identical and semi-nude, positioned throughout a boundless body of water, see these bathers facing turbulent waves that bisect the canvas. The notion of terrain plays a crucial role in Eggerer’s paintings, whether its unfruitful, barren lands behind striving, lone figures or abstract formations of color and form substituting for surface.  Here, Eggerer’s watery textures are strikingly contrasted with his fleshy pink subjects, contrasting the fluid movements of the waves with the multitude of poses shown here. 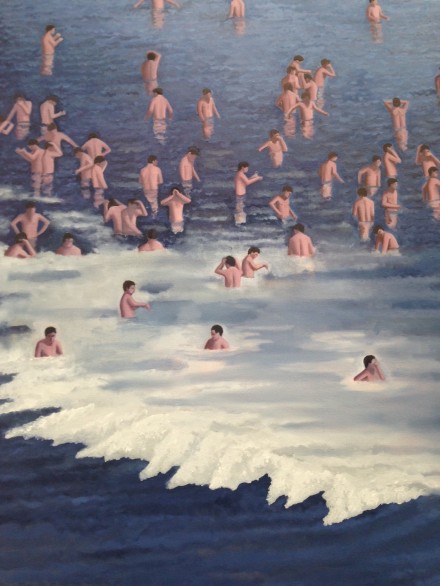 The dialogue between territory and human figure determines a large portion of Eggerer’s indulgent optic exercise, which heavily engages with the composition of various ambiguous and subliminal dialogues. Repetitive, obscure rituals on obsession, desire and physicality, conceived here entirely in water, claim the center stage in his oil on canvas, for which Eggerer employs delicate brushstrokes mimicking dream-like landscapes and intuitive juxtapositions of the subconscious. 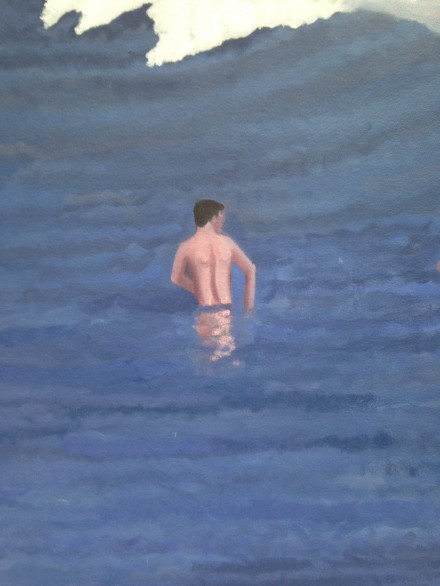 Spread throughout Eggerer’s square canvas, variations of the male nude in innumerable numbers, executed in miniature and contrastingly detailed in their physical activities, require a long pass at the painting, inviting a meditative inspection to see interactions between characters, variations in pose, and impressive attention to form.  Despite their small size, bodies show gentle twists of form and slight hints of muscle and skeletal structure, as Eggerer carefully twists each form here to give a wide range of human movement. 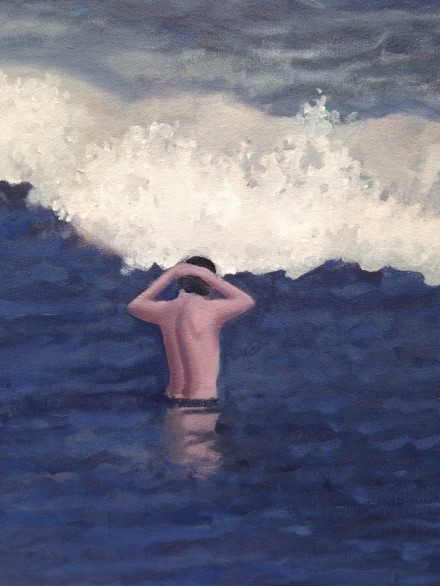 While voyeurism has crossed paths with Eggerer’s oeuvre before, his statement on gazing here is particularly accentuated, and somewhat suggested for the audience.  A sense of the erotic blankets the canvas, infusing the deep-rooted painting gesture of the nude bather, into a contemporary narrative, and exploding the form out into the multitudes.  Waterworld perpetuates Eggerer’s orchestration a reality that is not dictated by the physical limitations of his canvas, instead positioning his work as an everlasting perspective towards further potential horizons. This world depicted seems to burst out of its own borders, at such levels that no one else but his object, in countless versions, conquers his ideal realm.

Thomas Eggerer: Waterworld is on view at Petzel Gallery through February 20th, 2016.

This entry was posted on Monday, February 1st, 2016 at 12:00 am and is filed under Art News, Featured Post, Show. You can follow any responses to this entry through the RSS 2.0 feed. You can leave a response, or trackback from your own site.