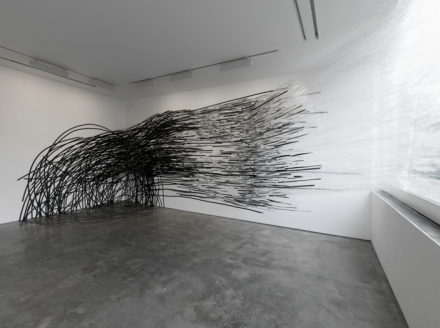 Working in close collaboration with The Drawing Room, Lisson Gallery’s has brought together a selection of pieces that explore the more conceptual reaches of the drawing process, not only exploring drawing as a condition of ideation or practice for smaller works, but as a method of experiencing, and segmenting, space itself.  Titled Line, the show is a strong investigation of space and memory, time and flow, extended “off the page,” as the press release reads. 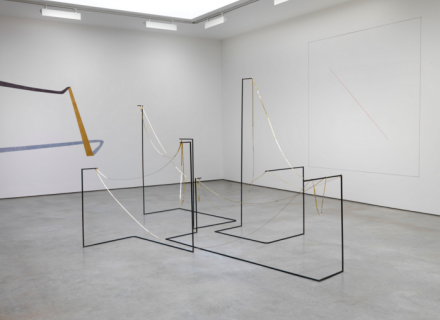 By the show’s perspective, a conscious act of drawing is in equal part an act of measurement, of bounding disparate points, locales, forms or ideas through the act of physical connection, albeit one that implies a more concretely tactile engagement already past.  While the works on view are hardly mere sketches or drawings on paper, their actions and methods are notably interrelated with these creative, technical or logistical processes.  For sheer visual appeal, it’s hard to beat the masterful piece by Monika Grzymala showing in the gallery’s front room.  Manufactured from black paper and tape, the work’s minimal elements are countered by their complex divisions of the room, creating a dichotomy between senses of the interior and exterior, and tracing the fading dynamics of light through the space, from window to wall, even while amplifying its character to some degree. 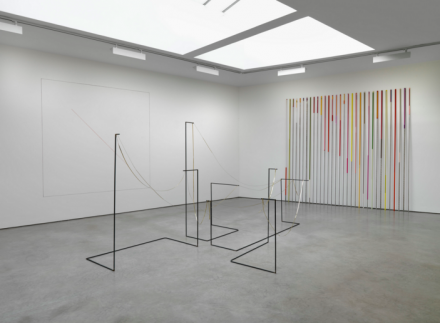 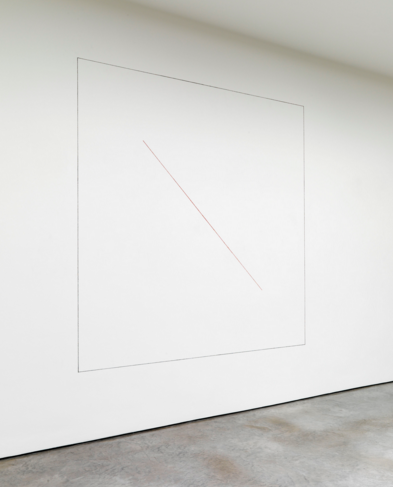 Drawing, however, as seen in the work of Sol LeWitt executed on the wall of the gallery, is as much a bounding of space as it is a movement through it, and its simple plane and diagonal seems an effort to make that point explicit.  His piece breaks the wall itself into a simple set of graphical dimension: height and width, rise and run.  Similarly, Victoria Haven’s work Potato/Potato enacts an exercise in bounded space akin to that of her minimalist forebear, but seems to turn her conceptual action back outwards.  Her overlapping tape and paint markings make for a reopened sense of depth, clearing LeWitt’s rigid bounds back out for a freed sense of depth on the white wall, similar to the wall-mounted aluminum bars of Maximilian Schubert nearby.  Each finds an intriguing echo in Florian Pumhösl‘s video projection, which traces a series of lines in real-time, underscoring the actual progression of movement and space that drawing requires. 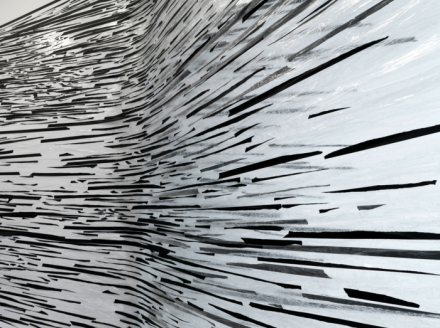 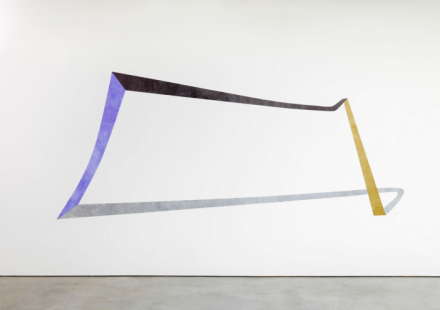 If there’s a point to be taken away from the exhibition, its this sense of drawing as bounded within time itself, of the artist’s hand in relation to its pathway through both the space it seeks to mark, and the duration of its mark-making.  These vectors, echoed in the coy X-Y coordinates of LeWitt’s work, is a fitting investigation of spatial relations, always held together by a tenuously thin line.

Line is on view through March 12th at 52 Bell Street. 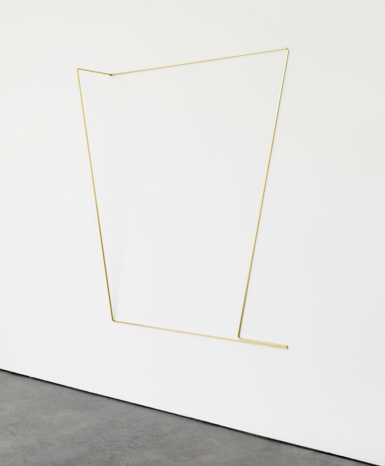 This entry was posted on Wednesday, March 2nd, 2016 at 5:29 pm and is filed under Art News, Featured Post, Show. You can follow any responses to this entry through the RSS 2.0 feed. You can leave a response, or trackback from your own site.