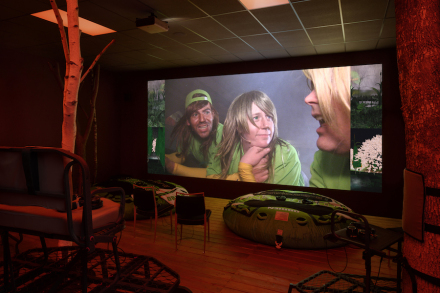 For their first exhibition at Andrea Rosen Gallery following the announcement of their representation by the New York dealer, Lizzie Fitch and Ryan Trecartin have delivered an ambitious debut, translating typical gallery experiences into a staggering, surreal encounter with cultural formats and blurred informational structures. Puzzling for those familiar with the gallery’s original architecture, the artists have realized a maze-like structure, composed of four conjoined chambers that usher visitors through a range of senses and perceptual exercises. Absorbingly eerie in their arcane interiors and radiant colors, each room installation compliments an equally disorienting video on view. Balanced between a corporate office room and suburban movie theater, one room suggests a considerably more traditional viewing experience, while another one asks viewers to perch on bar stools alongside faux rocks. 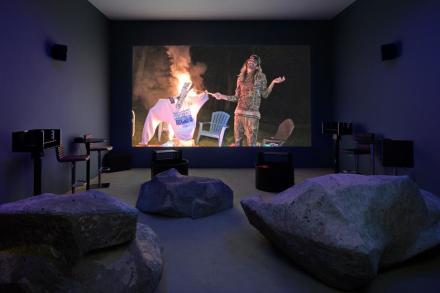 While the prevailing architectural tone of each chamber channels the iconography and aura of humdrum Americana, from generic mid-western malls, to abandoned arcades once echoing neons and chatter, to cabins in the woods; a degree of infused wretchedness supplements the moving images. Unburdened by linear narratives, cogent dialogues and consistent editing, the films Trecartin has been making over the years portray the generation-specific angst of early-millennial youth, from which Fitch and Trecartin first and foremost emerge. Beaming hues and abrupt screeches of ‘90’s TV, outbursts of Internet culture and chronic procrastination are molded into abstracted narratives and exuberant performances. 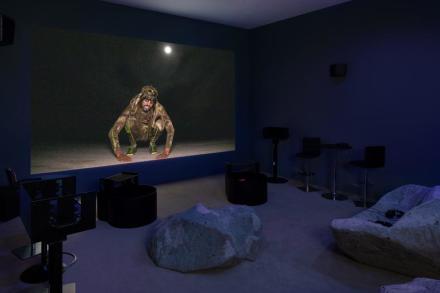 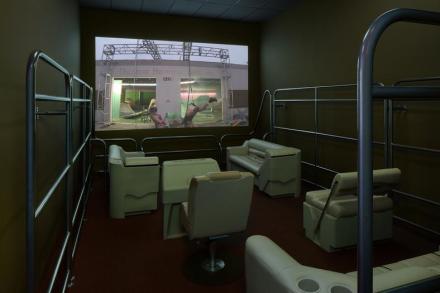 While the films often scrap narrative coherence, the viewing experience itself feels particularly focused around driving the content of each film forward.  Ever-shifting landscapes and overtly camp acting counter the changing physical contents of each viewing space, implementing vague auto-biographical references dispersed throughout each video, while also blending in references to teen slasher flicks, high school romantic-comedies, and the like, although loyalty to one genre or plotline rarely seems to limit the duo’s linguistic scope and formal inventions in narrative, character and setting. 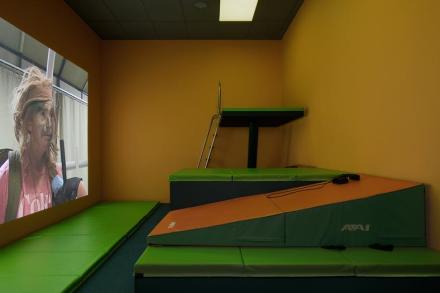 Since their graduation from Rhode Island School of Design in the early 2000s, Fitch and Trecartin have continued one of the most original and consistently strong collaborations in the contemporary art scene, while each maintains uniformly intriguing solo careers. The strength and reception for their collaborations, however, has been particularly enthusiastic, proven by their participations in some of the leading global venues including the Whitney Museum of American Art, the KW Institute for Contemporary Art, and the 55th Venice Biennale.

Lizzie Fitch and Ryan Trecartin is on view at Andrea Rosen Gallery through April 20, 2016.

This entry was posted on Tuesday, April 12th, 2016 at 1:03 am and is filed under Show. You can follow any responses to this entry through the RSS 2.0 feed. You can leave a response, or trackback from your own site.