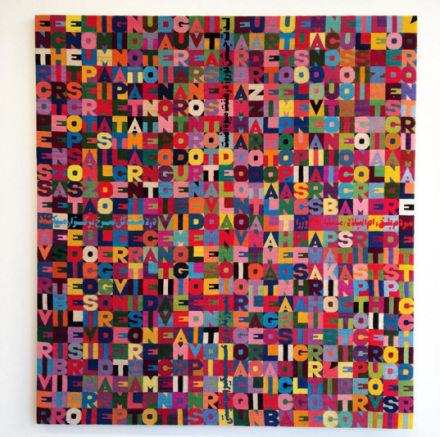 There’s a tangible spirit of enthusiasm in the opening exhibition for Totah Gallery in the Lower East Side, a dual exhibition exploring the work of Alighiero Boetti and Mel Bochner in concert.  The pairing, at face value, seems obvious; a pair of artist’s whose roughshod textual inversions made established their roles in the language and semiotic turns in art during the 1970’s.  Yet proprietor and principle curator David Totah’s investment in the broader material aspects of both artist’s careers unfolds here into a nuanced exhibition that rewards deeper readings and lingering views on each composition.  It’s a point of focus that he will continue at the space, driving research-heavy installs that blend history with personal encounter, always emphasizing exchanges between the artists and his own relationships with them. 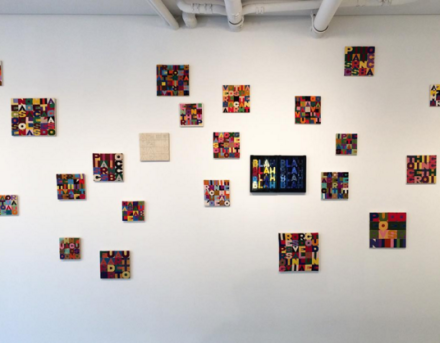 With repeated viewings, the distinctly poetic flow of each artist’s works seep into the foreground, emphasizing the visual interplay of text and paint and that each piece’s variations in color, size and material underscore.  Each artist’s work, in their own manner, takes on an understanding and invitation of outside forces into the work’s process, as Boetti’s famous collaboration with Afghani fabric-workers invites their subjective aesthetic inclinations into the work’s “fabric,” while Bochner’s variations in surface material and treatment, chiefly vellum with variations in scraping or slurring of paints, allows its natural grain to affect the final run of paint on its surface. 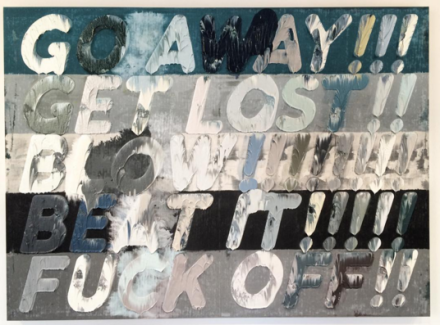 Posed against these elements are the texts themselves, and their native tongues.  Bochner’s brusque curses and invective balance well against the more fluid lilt of Boetti’s Italian, yet in each, a sense of humor emerge.  Boetti’s pieces, despite their gentle movements and sonorous Latin origins, often contain vulgar or ribald expressions, in one region posed perfectly against a multi-Bochner piece in which the artist has repeatedly painted “$#!+,” a wry substitution for the English curse. 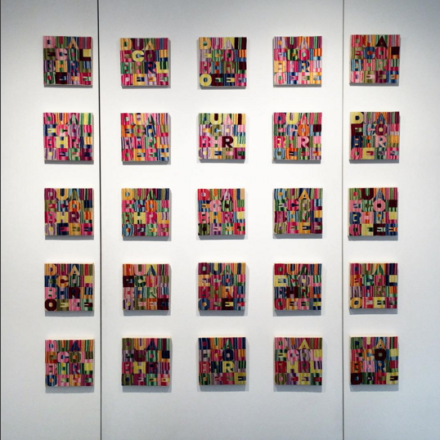 For their respective interests and political counterpoints, Bochner and Boetti’s intersections of playful and often humorous utilizations of their mother tongue underscores a shared interest in expression and communication across linguistic barriers and visual counterpoint.  It’s a fitting point for the two to meet, both in the gallery and outside of it, a point that Totah himself emphasized when relaying the story of the pair’s one personal encounter, and their choice of pastimes for an afternoon.  “They went to the movies,” he says. 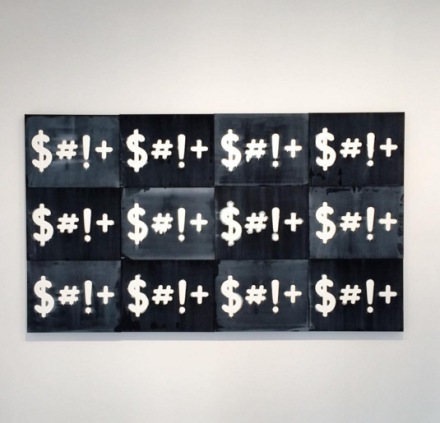 This entry was posted on Thursday, April 28th, 2016 at 7:29 pm and is filed under Art News, Featured Post, Show. You can follow any responses to this entry through the RSS 2.0 feed. You can leave a response, or trackback from your own site.