New York – Patrick Meagher: “Suggested for You” at Equity Gallery Through April 30th, 2016 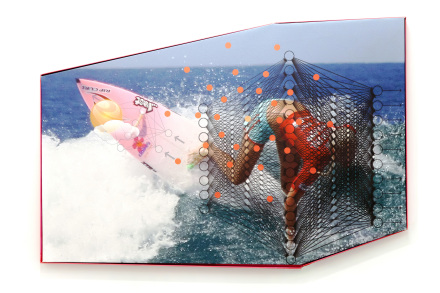 Suggested For You, Patrick Meagher’s solo exhibition at Equity Gallery, takes its name from the “suggestion engines” of social media and e-commerce sites, utilizing personal activity as a generator for financial value.  With a wildly colorful CMYK palette, Meagher presents a jumble of inkjet prints and sculpture that address the ways in which the internet mediates our perception of consciousness, and simultaneously reshapes them. 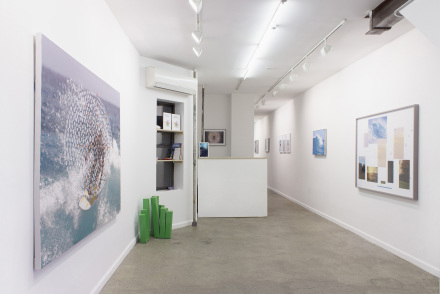 Curated by Queenie Wong of Sonnabend Gallery, the exhibition includes an “exhibition within the exhibition” – a collection of ephemera and a library of publications by Meagher his collaborators.  With weekly activities, including a group meditation led by Gemma Gambee of The Be Society, and the launch of a virtual reality version of the exhibition in partnership with ARS5D, Meagher is aiming to evoke an “art clubhouse,” recalling his organizing and social practice, primarily situated in the now-shuttered Chelsea space Silvershed, which is soon to be relaunched in a new location on the Bowery. 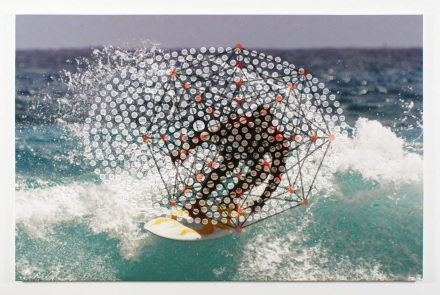 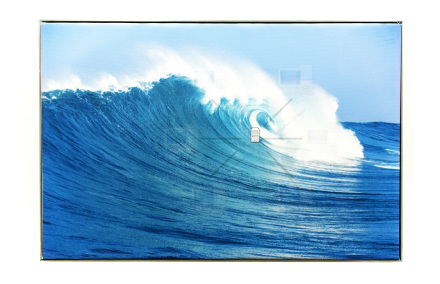 Water is a dominant theme through the show, implying both routes of data flow and the powerful forces that shape them.  The first piece encountered in the gallery is a large print on canvas of a surfer, countered by a mapped information network atop his image.  This is complemented by a similar piece at the end of the gallery, an off-kilter print of pro-surfer Bethany Hamilton in a hot pink, steel frame.  An artificial intelligence-based, decision-making diagram spreads from Hamilton’s feet to the edge of the frame. Both works conjure ideas of mindfulness and immediate presence, mingling with the waves of data and information in which we find ourselves daily. 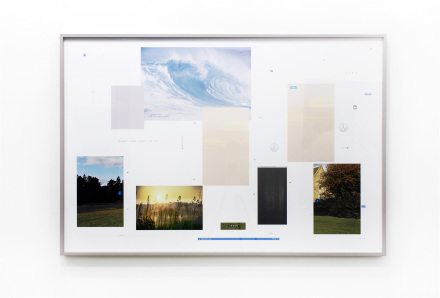 Desktop Daily addresses this notion more directly.  A large, framed print of a digital collage, it pieces together screenshots from daily web activities and commonly seen digital widgets.  The internet user’s own daily activities are controlled by corporations far more aware of our patterns than we are.  This awareness and ability to predict patterns leads to monetization and utilization, selling our data and behaviors as a commodity.  Desktop Daily attempts to make those patterns visible, repeating the tactic of collage to slow down the picture plane, the rate of consumption, the gush of information and stimulation. A paradoxical strategy of overlap and juxtaposition appears in an attempt to reshape attention and point to smaller points inside of the bigger structure of cyberspace. 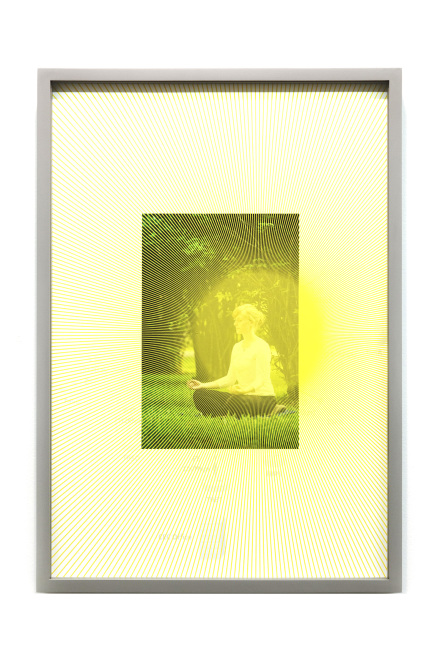 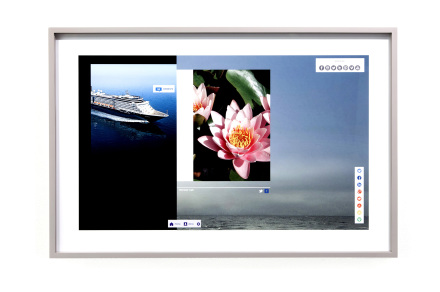 The examination of digital surfers leads to the topic of meditation, or the idea of meditation as a luxury, co-opted by Silicon Valley and Bay Area tech startups as a tool for increased productivity.  This form replaces archetypes of mystic asceticism with the silent retreat in a secluded Costa Rican resort, or yoga on a yacht. The pretty blonde white woman in Full Mesh Services (Meditation Parks) shows us who the subject of this meditation, with a golden moire of happiness laid over her image, the yellow ink rich and vibrant, and obscuring the images of hard drives and desktop computers that seem drawn in towards her. 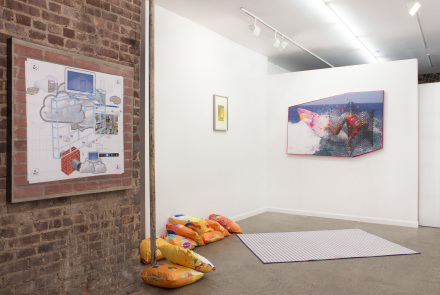 Playing on this notion, Meagher has arranged a meditation nook in the back of the gallery, with a pile of colorful pillows, stools made of LaserDiscs and a mesmerizing carpet. The carpet, titled Step and Repeat, gives off an effect similar to that of the 3D magic eye pictures so popular in the 90s, and, covered with credit card logos, equally plays on the image as a ground for the exercise and exploitation of self.  Similarly, Votif Motif is an assemblage of seven Kindle Fires arranged in the gallery windowsill, all playing the same loop of a lit votive candle. The images emphasize repetition as an essential part of a meditation practice, but also part of the insistently numbing certainty of smartphones, tablets, or the internet. 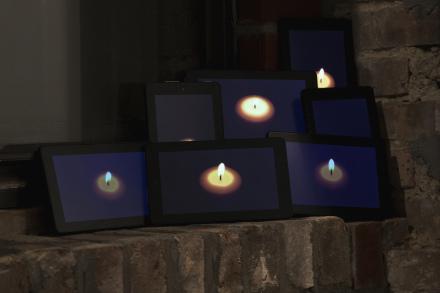 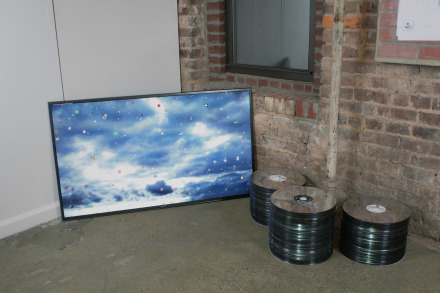 While it would be a gross exaggeration to call our devices a prison, it is still an easy metaphor to reach for.  Next to the Fire shrine is Cell Block, a wheat-pasted collage on faux brick. Images of bricks, exposed cinder blocks, dirty clouds, computer monitors and “add friend” widgets compete with a screenshot of a cartoon that had been posted on Instagram: two prisoners in stripes each painting what they see in their window. The caption reads, “What did you focus on?” One prisoner paints the bars in the window while the other paints the landscape outside. 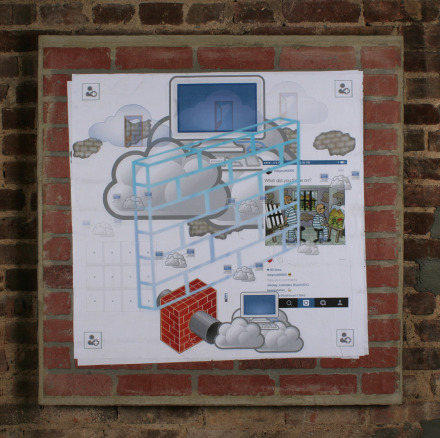 Playing on an exhortation to look out the window, a 48”, Ultra-HD 4K flat-screen television sits below the gallery’s back window (which incidentally looks into a dark alley), and shows a browser-based piece, Sprite Kites, in which picturesque landscapes fade in and out like a screensaver, while familiar widgets pop around the screen like sprites.  A similar work is found atop the gallery attendant’s desk, in the screen of a MacBook Air propped sideways. Suicide Dive (seacoast emoji marquee) is a stunning photograph of the sea from the top of a cliff’s edge, framed by various Y2K-era emoticons committing suicide. 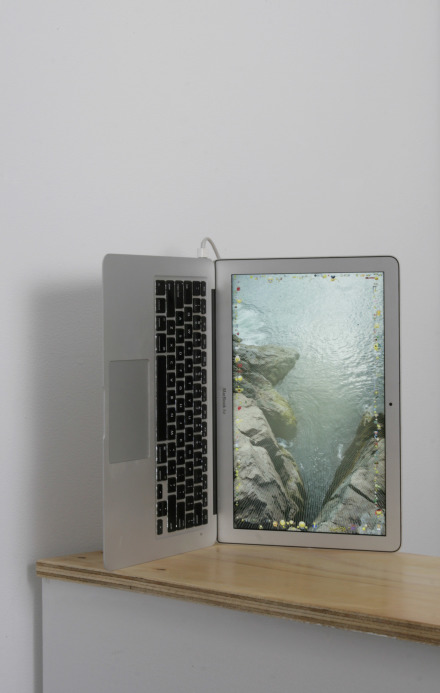 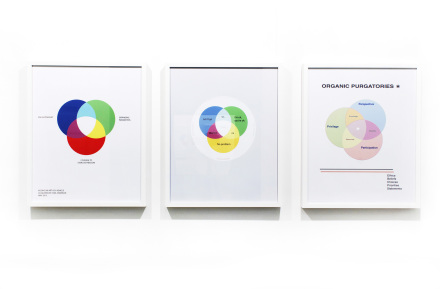 Corporations routinely lie and mislead. This obfuscation is always present in our new interconnected reality (for instance, what exactly exemplifies fire about a Kindle Fire?).  Meagher’s info-collages are an attempt to detangle the deluge of information we receive, often specifically in relation to art and commerce, and reposes them as object lessons for artists and curators (one booklet in the library is called SOYOUWANTTOBEACONTEMPORARYARTIST).

The exhibition is sprinkled with jokes. A digitally printed facsimile of a banker box sits tucked away on a shelf, while elsewhere, a bookshelf shows a few porcelain casts of wadded up rags.  The most prominent images are a number of knee-high powder-coated steel sculptures that look like cartoon grass. Given the presence of these signifiers towards nature, one begins to actually feel like they have left the digital landscapes so prominent in the space for the outside world. 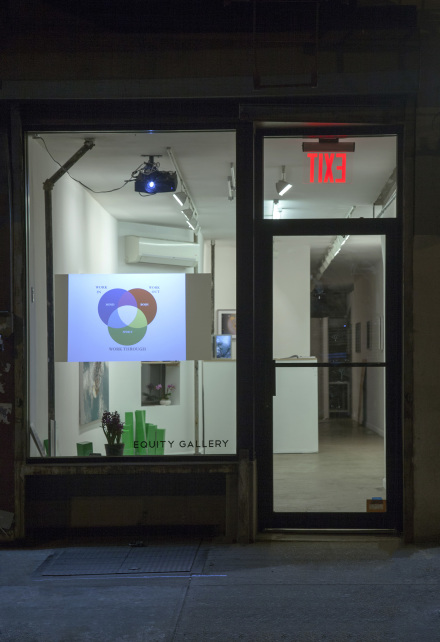 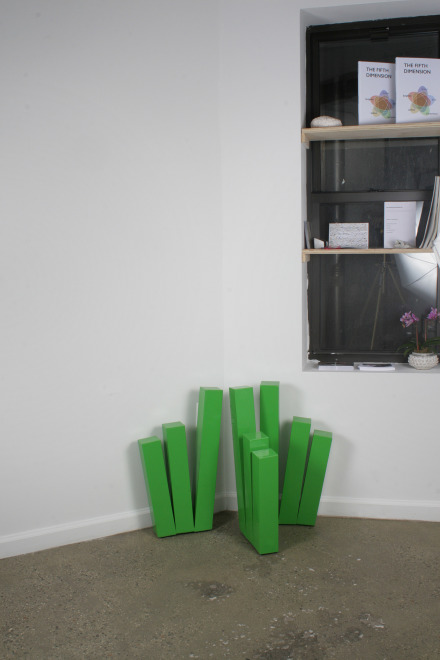 Installation view of Suggested For You, photo by Jeremiah Coyle 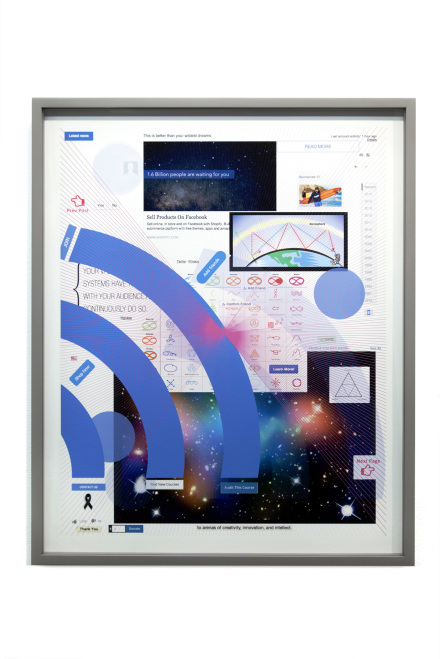 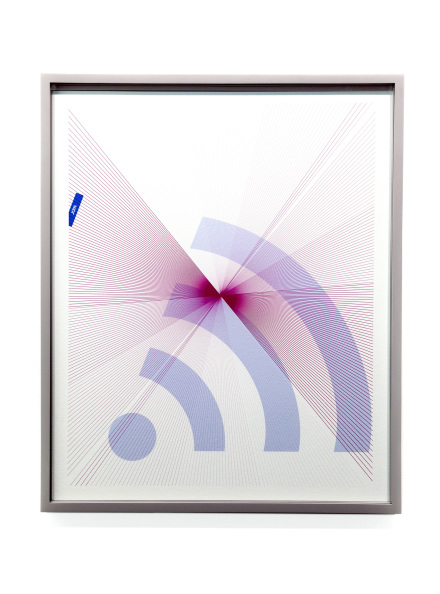 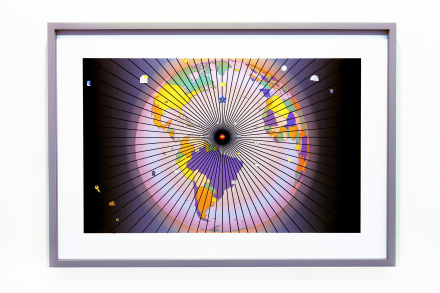 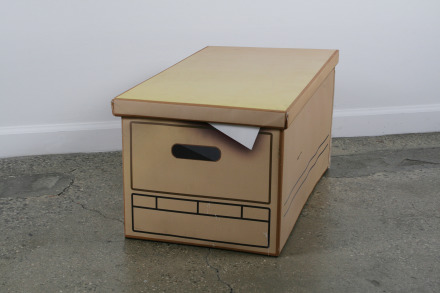 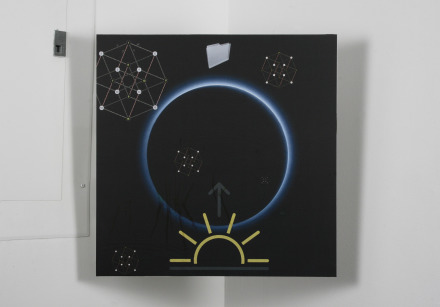 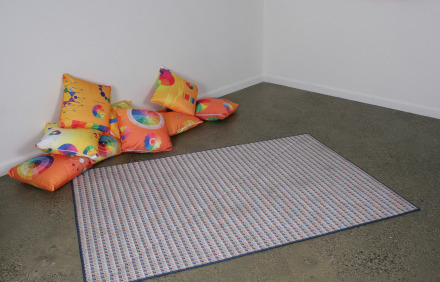 Read more:
Patrick Meagher: “Suggested For You” [Equity Gallery]
“It’s a Digital World by Meagher and We Just Live In It” [Artfuse]
“Artist Patrick Meagher takes on the thrills and chills of surfing waves and the web” [Swell Season Surf Radio]

This entry was posted on Saturday, April 30th, 2016 at 2:03 pm and is filed under Art News, Featured Post, Show. You can follow any responses to this entry through the RSS 2.0 feed. You can leave a response, or trackback from your own site.