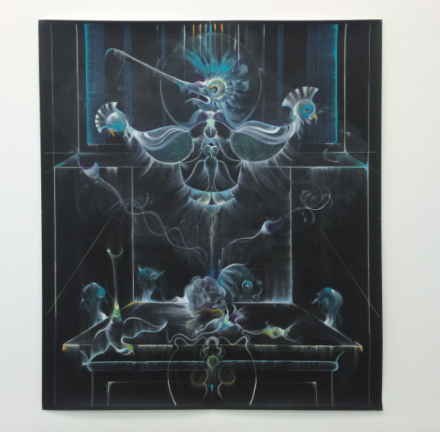 Artists Gert and Uwe Tobias return to Team Gallery in New York for a show of new drawings and sculpture this month, bringing with them a new variant on their already prolific output of work negotiating the spheres between the folklore of their native Romania, and the context of Western art production that their own work is situated within. 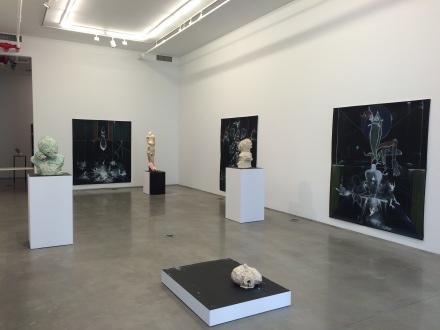 Marking a notably dark departure from their previous bodies of work (which were often produced in the space they were shown in), and even the pieces on view at the pair’s exhibition in Paris, the Team exhibition is decidedly ominous in tone.  The walls are covered with immense, symmetrically balanced drawings that show a new direction for the artists.  A central form functions as a talisman or mandala of sorts, a central point which draws the viewer’s eye back and forth from the ghostly limbs and bodies that float throughout the picture plane.  These elements are reiterated sculpturally, with a selection of new castings in ceramic and glass bringing their phantasmagorical lines into the three-dimensional gallery space. 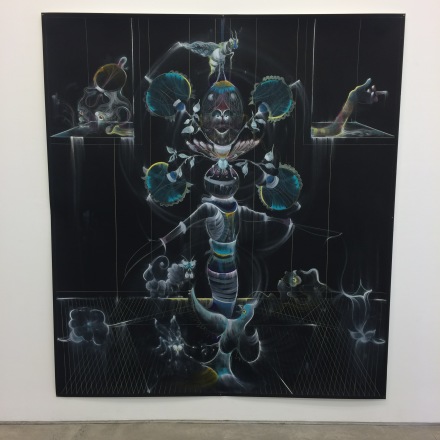 As AO noted previously of Gert and Uwe’s exhibition in Berlin, the artists seem to have taken a much more stark, almost sinister note of late.  While their work frequently drew on the dark folk tales of their Romanian homeland, their bright colors and vividly energetic forms often countered what could have been interpreted as more visceral material.  Here, the brothers have stripped all of this away, leaving only the thin lines and shadowy reflections of the human form to haunt the gallery space. 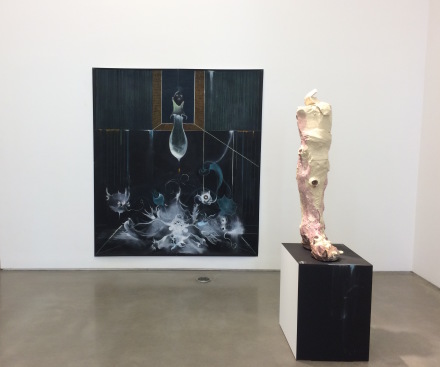 This note, however, is balanced by the Tobias’s ongoing engagement with the canon of Western art history.  Their works have long engaged with constructivist approaches to the image, and with the plainfaced abstraction of the Twentieth Century.  Here, this thread continues, yet with a notably refocused perspective.  The work on view seems more ready to draw on the deconstructed and often visceral portraiture of Francis Bacon, or the bodily pollution of some of Bruce Nauman’s work, rather than those artists’s conceptual forebears.  One sees the brothers moving through the vocabulary into new territory, as if they were reaching towards a more humanist vision, albeit a decidedly more perverse, contaminated strain.

The artist’s work is on view through June 11th. 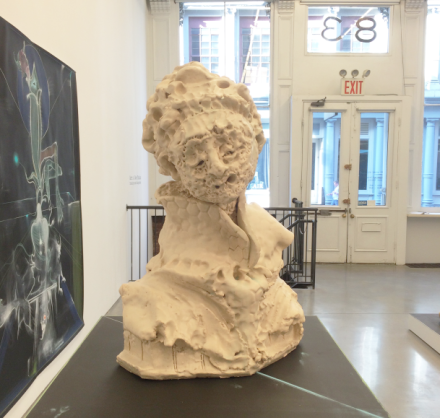 This entry was posted on Thursday, June 9th, 2016 at 2:27 am and is filed under Art News, Featured Post, Show. You can follow any responses to this entry through the RSS 2.0 feed. You can leave a response, or trackback from your own site.