The Canadian artist duo of Janet Cardiff and George Bures Miller, known for their immersive installations mixing deeply sculpted sonic environments with an often theatrical narrative, are currently presenting their fourth solo exhibition with Luhring Augustine this month with two recent works: The Marionette Maker (2014) and Experiment in F# Minor (2013).

The show’s first piece, The Marionette Maker was originally commissioned for the Palacio de Cristal at the Reina Sofia in Madrid. Unlike the bright and spacious setting of the Palacio, the work is presented here in a darkened gallery space, shifting its focus and context to that of the late evening or the dark of night.  In the center of the room is an old trailer, filled with robot-controlled marionettes and a life-size, sleeping replica of Cardiff. Through the various windows of the caravan, viewers can watch as the marionettes perform their various acts.  On one side, the character of a marionette maker sits at his desk, making sketches while others twirl and dance around him. Some of the marionettes are eerily unnatural, figures enhanced with clay wings or other body parts, while other characters, like the guitarist, are more human-like.  It is unclear whether the creatures are the marionette maker’s creations, or conjured in a dream by Cardiff’s sleeping figure. A copy of Gulliver’s Travels, various postcards and National Geographic magazines line the room, alluding to the notion of journey to other worlds. 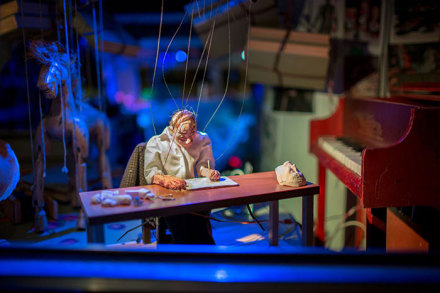 During the 14 minute run-time for the piece, a performance unfolds on a small stage, complete with fake forest scenery.  Viewers can take a seat on vintage stadium chairs to watch the pianist and opera singer perform an aria from Tchaikovsky’s None but the Lonely Heart.  The performance momentarily draws all the attention to that side of the caravan, but after the song has ended, thunder strikes, a ship begins to sail on blue tulle in a nearby window, and the series of events and life amongst the converging worlds seems to pick up again.

As if the caravan were a huge music box, gigantic, old-fashioned speakers spin on top of the roof, emanating sounds that fill the space and add to the compounded atmosphere both in and around the trailer. Its British Columbian license plate refers to the artists’ home town, where part of the sound installation was recorded on the farm where they live.  A coyote’s howl, a dog barking, rain, and a bomber plane all dart across the room in a spherical warp of sound.

At the back of the gallery is Experiment in F# Minor (2013), a piece which places 72 speakers atop a plywood table. As viewers move around the table their shadows trigger recordings of various instruments being played in F#, allowing harmonies and melodic counterpoints to emerge from a chaotic arrangement of tones and sounds.  The music envelops the room, seethes and dissipates as people move throughout the space, creating a spatial composition that is constantly in flux, and which relies on the viewer to activate its series of musical relationships. 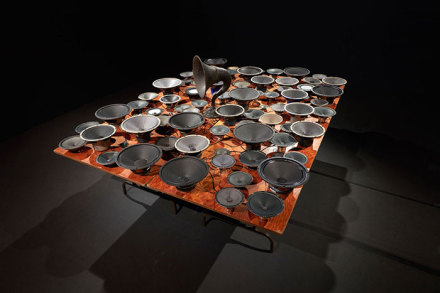 As is often the case in their work, Cardiff and Miller’s use of sound is elemental to each piece. In Experiment in F# Minor, it’s tonal character reaches almost piercing levels when the room is full of people. In The Marionette Maker, sound is presented as transportive, used to establish a scene, build narrative connections and trigger memories.  Together the show temporarily removes the viewer from the present through these varying strategies, and explores the immersive effect of ambiguous narratives where one is unsure who exactly is pulling the strings.

This entry was posted on Friday, June 10th, 2016 at 12:30 pm and is filed under Art News, Featured Post, Show. You can follow any responses to this entry through the RSS 2.0 feed. You can leave a response, or trackback from your own site.