May 13th, 2021
REFERENCE LIBRARY
Home » AO On-Site – Berlin: “The Present in Drag,” the 9th Berlin Biennale at the KW Institute and Feuerle Collection Through September 18th, 2016

AO On-Site – Berlin: “The Present in Drag,” the 9th Berlin Biennale at the KW Institute and Feuerle Collection Through September 18th, 2016 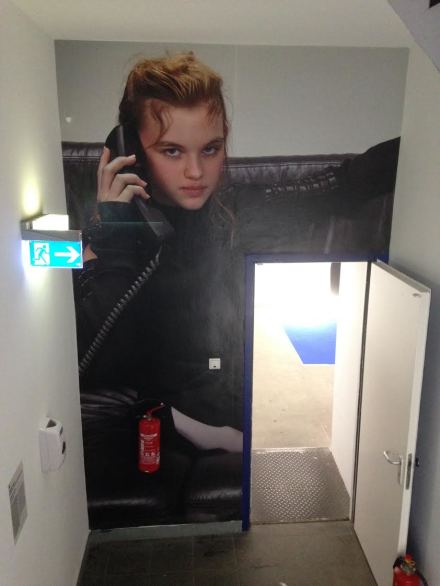 An Installation by Puppies Puppies

The 9th Berlin Biennale for Contemporary Art, curated by DIS (the New York art collective formed by collaborators Lauren Boyle, Solomon Chase, Marco Roso and David Toro), has long promoted a vision of the future as now.  Steeping their work in the ambitious task of interrogating relationships between the human and the digital, the collective has been turned loose on the prominent art biennial, using their unique brand of commentary on politics, happiness, commercial branding and the paradox of the modern age to frame the show as a brand, a tourist trap, and a materialization of the virtual in tandem. The Present in Drag channels the discomfort and drastic uncertainty that is a product of uncertain links and porous borders established by technological advancement.  Expanding beyond its traditional venue at the KW Institute for Contemporary Art, additional sites for this Biennale are scattered throughout the city in various buildings and institutions. Its main point of departure is the Academie der Künst, located off Pariser Platz, and to the tourist mainstay Brandenburg Gate, and moves through the fabric of the city with its humorous, haunting and at times grotesque commentary on contemporary art in the digital age. 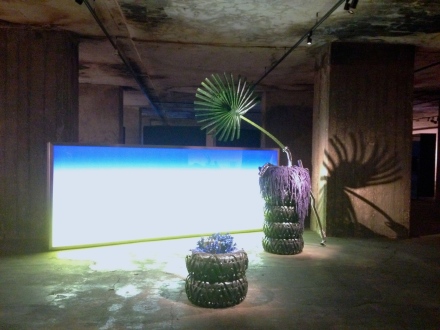 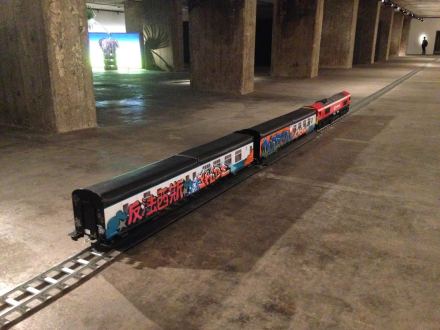 The cold hum of screens, buzz of overhead drones, and chatter of ironically amplified ringtones permeate the Biennale, often steeped in an irony that can be overwhelming.  A suspicion of the technical and the encoded existence it implies is clear in unwieldy renderings of faces and bodies on-screen, or in digital reproductions.  Themes that feel at once strikingly nostalgic and contemporary surface continually, using language and visual cues surrounding nationality, violence, materialism, and human connection.

Beyond the ironic disdain with which some engage with the sounds and surfaces of the modern age, however, many of the pieces included in the fair possess a genuine sincerity that feels more forward-looking and hopeful than other interpretations of ‘modernity’. The Army of Love, by Alexa Karolinski and Ingo Niermann, for instance, projects timeless human concerns as love, intimacy and sensation.  The film, on view at the KW Institute, suggests that the pervasive alienation felt by humans living through digital devices runs deeper than the technology itself.  In the progression of works contained in the main building of the KW Institute, The Army of Love comes directly after American-Belgian artist Cécile B. Evans’ What the Heart Wants, the central installation of this site. It features a wall-to-wall pool and platform from which viewers watch the artist’s accompanying film, in which a narrator moves through confessional/commercial mash-up surrounding the angst and uncertainty of life as a human-machine hybrid. 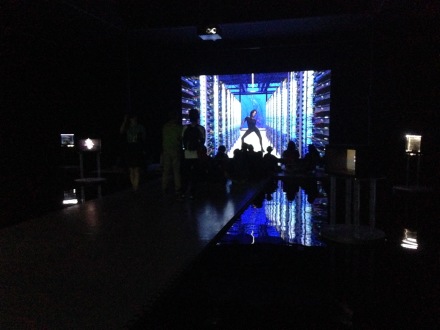 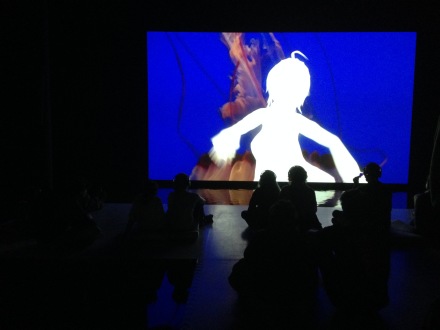 Cécile B. Evans “What the Heart Wants”. 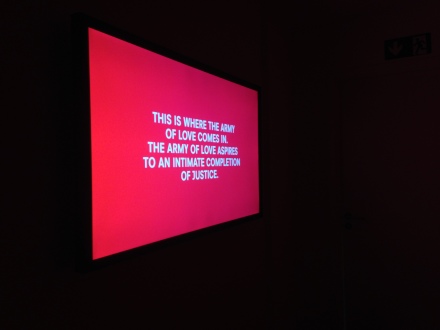 Meanwhile, at The Feuerle Collection, a converted telecommunications bunker-turned-gallery hosts pieces by four artists working in different mediums. Josephine Pryde’s large-scale color photographs depict hands touching the body or chest of a faceless subject, alternating with images of the same contact with a screen or other device. These images punctuate the sensuality involved in our physical relationship with technology, and the intimacy between the modern subject and her tablet, cell phone, screen, etc.  Nearby, Beijing-based artist Guan Xiao has filled a space with brilliantly-colored structures, stacks of commodity material—fake flowers, car tires, etc. arranged in totem-like forms that speak to material waste and arbitrary accumulations of matter in a post-commercial landscape. 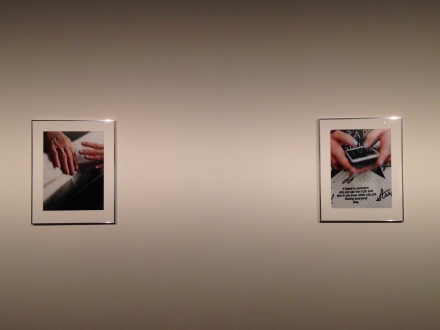 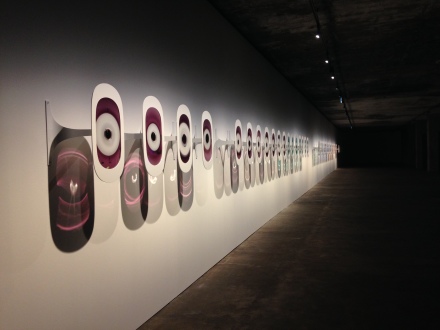 The Present in Drag (Installation View) at the Feuerle Collection

The Present in Drag puts forth a vision of the world choked-out by technology and floundering in political and social extremes.  It’s equally dystopian and absurdist, and the conflicts of emotion it causes is striking in and of itself.  In the sum of works encountered, an effective emphasis on superficiality is balanced by poignant odes to love, presence, and touch, framed as tragic casualties of the digital revolution, often mourned or redeemed by many of the works featured here.  The result is something of an exhibition opposed to consensus, preferring to break down easy readings of the present through unified subject matter, and rather to impress the deluge of subjectivities produced in the modern era of hyper-connectivity.

This entry was posted on Sunday, July 10th, 2016 at 3:46 pm and is filed under Art News, Featured Post, Show. You can follow any responses to this entry through the RSS 2.0 feed. You can leave a response, or trackback from your own site.