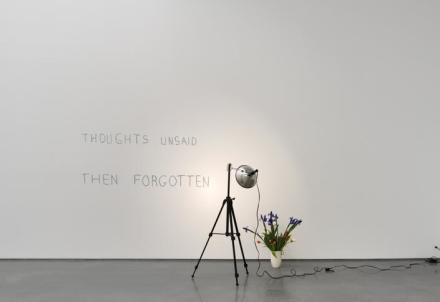 Bas Jan Ader’s work currently on view at Metro Pictures succeeds in conveying the Dutch artist’s interest in the body and the self. While Ader’s work has been exhibited in Europe through group and solo shows, his pieces have not been shown in the United States on such a scale. Thus, this show provides American viewers the opportunity to actively engage in Ader’s photography, films, and installations. 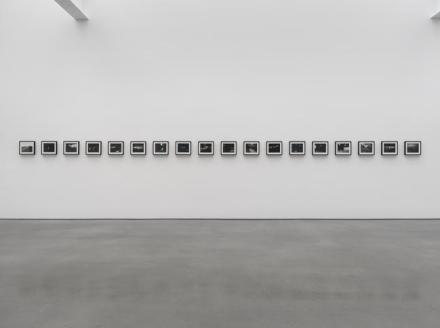 Focusing on works created between 1968 and 1973 when the artist was living in California, this presentation offers the mysterious and deeply romantic essence that fascinated him until his 1975 disappearance. 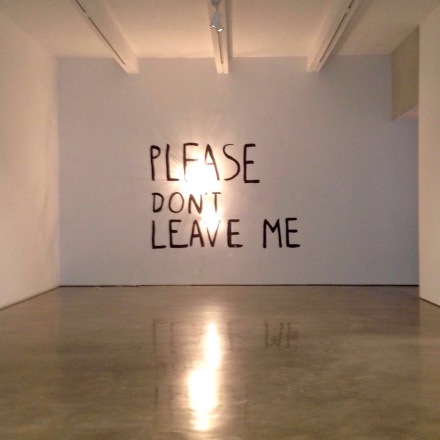 As soon as one enters the gallery, Please Don’t Leave Me (1969) grabs their attention. Located on the far end of the wall, one is drawn in by the large, black writing of that phrase. “Please Don’t Leave Me,” is certainly a strong one. Any viewer can relate to it; we have either said it to someone or it has been relayed to us. The large central light lures one further towards the work. By illuminating the phrase, viewers remain intrigued and curious. Who is being spoken to? Why do they want to leave? This uncertainty fosters mystery. Also, viewers remain unsure of whom to sympathize with. Do they side with the speaker or the receiver? Either way, one recognizes the pain behind the phrase. 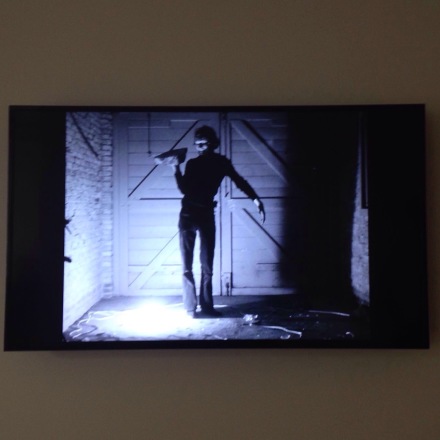 In the film Nightfall (1971), Adler explores the nature of life and death through light, darkness, and the body’s actions in a darkly space lit by two light bulbs on the floor while the artist stands in front of a large stone slab.  Over the course of the film, viewers observe Ader’s effort to raise and drop the stone. During his first try, Ader stares out towards the viewers and then down at the stone, as if he has to mentally prepare to lift the stone. He struggles to raise it up from the ground above the knee and balance it on his shoulder. The first drop appears uncontrolled as it darkens half the space. However, Ader quickly gains his composure, and with more confidence picks up the stone, balances it on his shoulder and firmly drops it over the second bulb, darkening the space, and ending the film. These two actions, uncontrolled and controlled, strongly convey that life (like light) can shine bright but in any instant can be crushed by death. 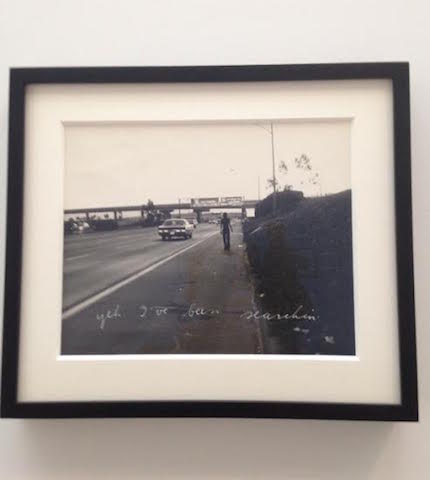 Bas Jan Ader, In Search of the Miraculous (One Night in Los Angeles), 1973

This exhibition also includes eighteen prints from Ader’s series In Search of the Miraculous (One Night in Los Angeles) (1973), the last body of work before his disappearance. This work shows the artist’s journey through Los Angeles towards the ocean in search of something that defies the physical world. While this journey can appear romantic, relying on the miraculous often occurs after no longer believing that anything in the physical world can provide for someone. Each print has a caption written by Ader such as “yeh I’ve been searchin” that relay his quest. This particular print shows the artist walking alongside a highway as he continues his journey. Ader’s back is to the viewer, which certainly recalls the rückenfigur, used in German Romantic painting. One only assumes that the man is Ader walking but it is not definite. Thus, viewers can identify themselves as the subject and begin their on quest for the miraculous.

This entry was posted on Wednesday, August 3rd, 2016 at 3:00 pm and is filed under Art News. You can follow any responses to this entry through the RSS 2.0 feed. You can leave a response, or trackback from your own site.