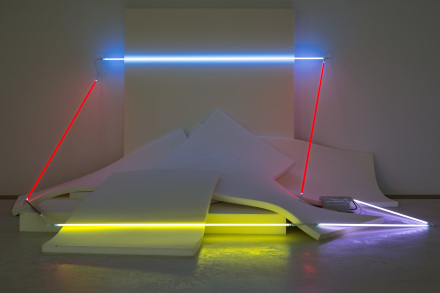 Keith Sonnier‘s work has stood as a landmark voice in the development of abstract languages and explorations in the sculptural form, suspending neon lights over and across varied materials, from strips of cloth to reflective panes of glass, each time utilizing his materials’ internal consistencies to drive at nuanced explorations of light and space.  It should be telling then, that Whitechapel Gallery’s impressive exhibition focused on the artist takes up only three years of his career, examining his creative output from 1968 to 1970 as a foundational point in both his work, and the generation of artists around him.

Even with such a short span of time, the exhibition wastes no ground in introducing the dominant interests in Sonnier’s career, in particular his early work in the defining Ba-O-Ba series.  Stringing bars of neon along panes of glass or through arrangements of various materials, his pieces casts arcs and lines of colored light both along the edges of each object, and onto the walls around the piece.  Using the characteristics of each piece in conversation, Sonnier’s works in turn become studies of material itself, allowing the various densities and shades of his glass, rubber and foam to shape the diffusion of light across the work’s areas.  They are abstracted topographies, accented reliefs created from the presence of light along changing forms. 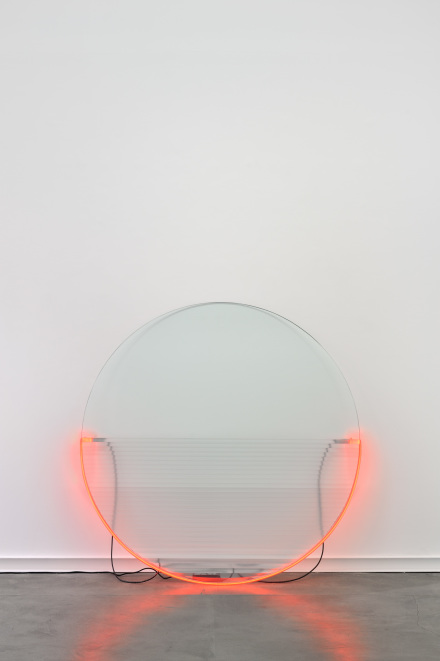 This studied perspective on the behavior of light is at the core of Whitechapel’s presentation, and the works selected bear the early indications of Sonnier’s increasingly refined eye, and for his abilities in intertwining the thought and practice of varied schools of thought among artists of his generation.  His nods towards minimalism in the subtle interplay of forms and lines in space, placed into conversation with his own studies of light diffusion and the capacity for light as a sculptural material, puts his work, especially in this show, as a fitting continuation of the work of the 1960’s avant-garde. 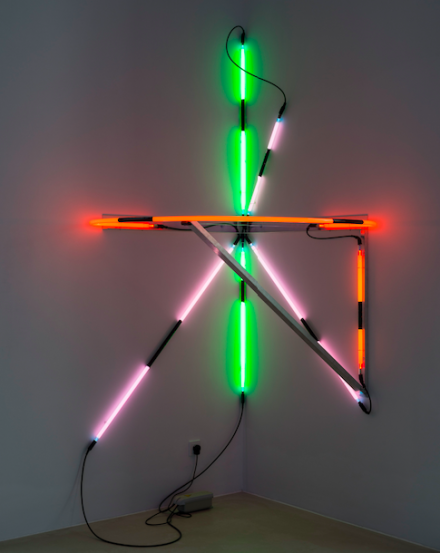 Yet his work equally predicts that materialist investigations and evolution of his contemporaries like Richard Serra, Lynda Benglis, and others, each of whom used the minimalist vocabulary to their own ends.  Sonnier’s works combine a careful study of each of elements in a piece, and extends that awareness to a broader sculptural whole.  Washes of neon light fill in gaps between foam and glass, or pool on the surfaces of objects in a way that continually invites new perspectives and circulations around the piece, appreciating each moment of dialogue in its own spatial arrangement.   This is further accented by the hardware Sonnier uses to execute the works, as wiring and support structures are afforded a certain compositional focus in their own right.  Lit Circle Red with Flutex, for instance, uses the his lighting to trace a curved arc around half the perimeter of a glass circle, creating a dusky halo on the floor before the work.  Yet at the same time, the piece is marked by the wiring itself, smooth, bending lines of black cable that not only facilitate the light itself, but play against it in its own exchange. 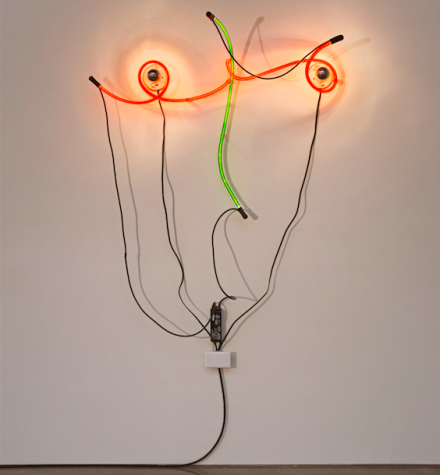 This is repeated with Neon Wrapping Incandescent, where a series of lights are hung in relation to their draping, sagging wires.  The result is a cluster of lines that recalls an abstracted line-tracing as much as a lighting arrangement.  Sonnier, in opposition to the clinical treatment of light in space that defined many of those before him (Dan Flavin among them), seems to appreciate the system itself, allowing the full demands of the electrical structure to present, and represent, itself within the work’s final product.  Taking this sense of cohesion and conversation between material elements in each work, Sonnier’s exhibition marks a striking point for exchange between the avant-garde movements of the 1960’s and 1970’s, with a body of works that marks the passage of one decade to the next.

This entry was posted on Tuesday, September 6th, 2016 at 12:39 pm and is filed under Art News, Featured Post, Show. You can follow any responses to this entry through the RSS 2.0 feed. You can leave a response, or trackback from your own site.