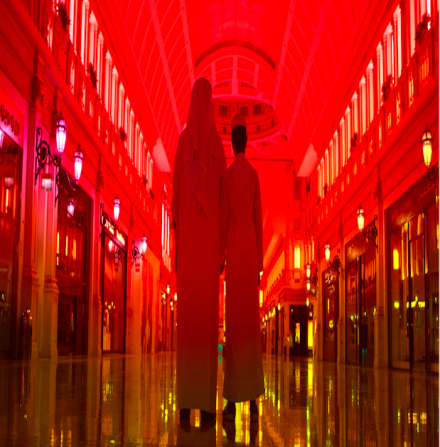 Currently showing on the first floor of the Whitney Museum is Black Friday, the American-Qatari artist Sophia Al-Maria’s solo debut in the United States.  Born in the U.S. and educated in London and Egypt, Al-Maria has been a central voice in the Gulf region’s burgeoning contemporary art scene.  At the helm of the art collective Gulf Cooperation Council as a founding member, Al-Maria’s work drives at a concept of “Gulf Futurism,” a term she coined to define the rapidly evolving economic and social landscape of the region.  As a writer, researcher and filmmaker, Al-Maria has been delivering a substantial body of work on oil-fueled wealth and its political/social consequences in the Middle East. 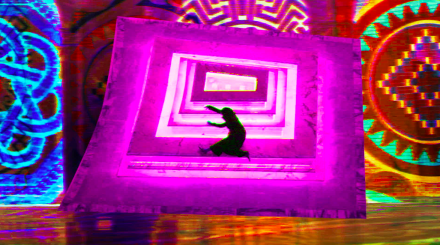 “The mall is the dominant structure of a certain class group of which I am a part of”, underlines Al-Maria in an exhibition essay penned by Christopher Lew. “It’s a place of weird pilgrimage in an era where to consume is to absolve yourself.”  The namesake sixteen-minute video is a captivating auditory and visual narrative, composed of surreal and often psychedelic renderings of shopping malls from the Arabian Gulf region, where sections of cities such as Dubai and Doha are blanketed by mammoth size malls as result of the skyrocketing prosperity and a fascination with Western luxury lifestyles after centuries of poverty and longstanding colonial policies that dominated the region.  They have become symbols of wealth and exorbitance in booming economies such as China and Saudi Arabia, and their generic interiors often integrate details from ancient Western architecture with a kitschy predictability that presents itself harmoniously with the overwhelming sameness of the brands and goods offered. 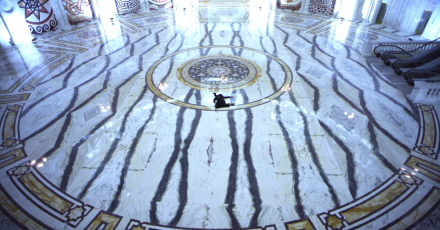 Collaged together within an abstract narrative thread are various sequences in which scenes from malls are heavily accentuated with mind-bending digital manipulations, transforming familiar spaces into otherworldly arcades.  Images of embellished stairs escalating towards blue skies, and populated by puffy clouds track a nightmarish scene of distorted mall interiors washed in a red hue, and overpowered by its soaring ceilings and ghostly emptiness.  A father and son stand petrified amidst the disarray. Scoring the work with hypnotic, swirling music, Al-Maria warps her mall-dwellers against a backdrop of traditional black or white attires.  Al-Maria’s video blends dystopia and paradise, nightmare and fantasy, against the cultural oppositions of East and West. 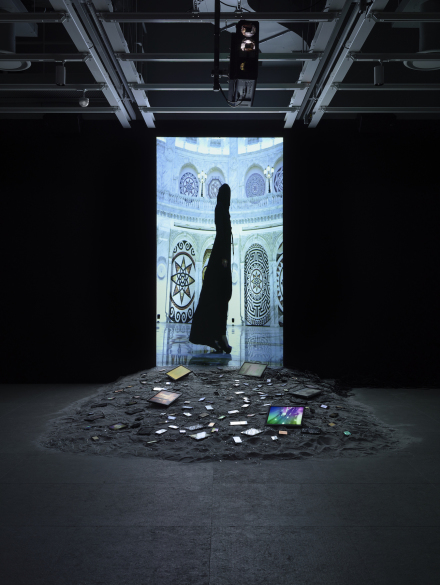 Litany, on the other hand, is a jumble of discarded, past-generation smartphones and other electronic devices, objects that once appealed to their buyers but are now disposed on a pile of sand on the museum floor.  The devices each run various glitch-heavy short clips on their “outdated” systems, supporting the chaotic dystopian aura generated by Black Friday’s proximity.

Sophia Al-Maria: Black Friday is on view at The Whitney through October 31, 2016.

The Whitney [Exhibition Page]
CNN [In the Digital, is shopping America’s new religion?]

This entry was posted on Thursday, September 15th, 2016 at 12:04 pm and is filed under Art News, Featured Post, Show. You can follow any responses to this entry through the RSS 2.0 feed. You can leave a response, or trackback from your own site.