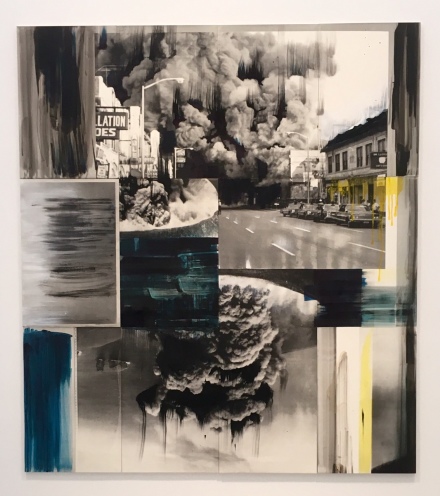 Lorna Simpson’s Salon 94 exhibition speaks volumes with only a few shades and a handful of images on view.  Echoing throughout the gallery space’s small confines, her skeletal, eerie patterns contribute to a cohesive vision throughout the exhibition.  Despite consisting of paintings of a variety of sizes and of a combination of media even across the surface of one piece, the artist displays a unity in terms of her finely tuned, yet free-roving style.  The pieces themselves display an amalgamation of printed photographs, playing against spatters and blots of ink against a gradually altered background, providing a formal and thematic unity despite its disparate visual cues. 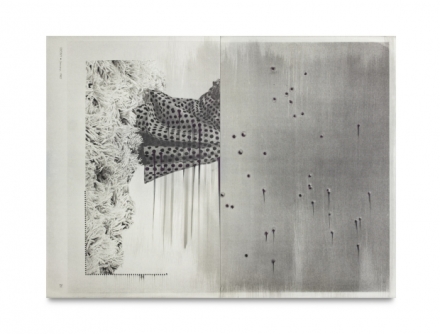 Through the use of found imagery, Simpson operates within the language of collage, yet her splintered images do not form a composite final icon, instead working towards the repetitive patterns of a mosaic, underscoring themes of the body, of violence, and of perseverance through the historical cues and resonant emotional content of her selected images.  Through the form of the collage, each work is able to form unique combinations of these symbols, which, together, allow the work to stand alone while building on the recurring themes of the works. 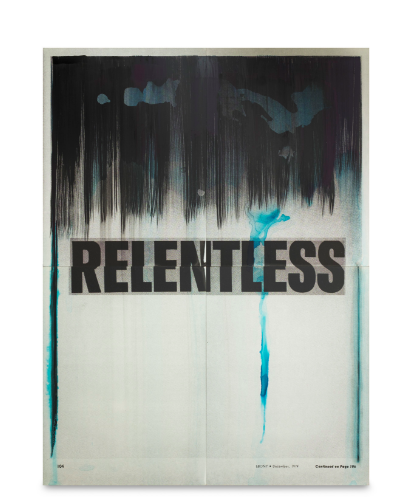 Much of the significance of Simpson’s work lies in her source material. The artist takes images from vintage issues of Ebony, Jet, and Associated Press, fragmenting tropes and imagery often associated with blackness.  This decontextualization elevates the subject matter, while highlighting the oddity of its treatment in consumer society.  The use of vintage magazines displays the artist’s interest in the intersection between history and the present, and the constructions of ideology that shift across timeframes and situations.  As evidenced by works such as Enumerated, formed by images of hundreds of nails aligned as tally marks, the pieces are eerie yet expressive, creating an almost elegiac effect. 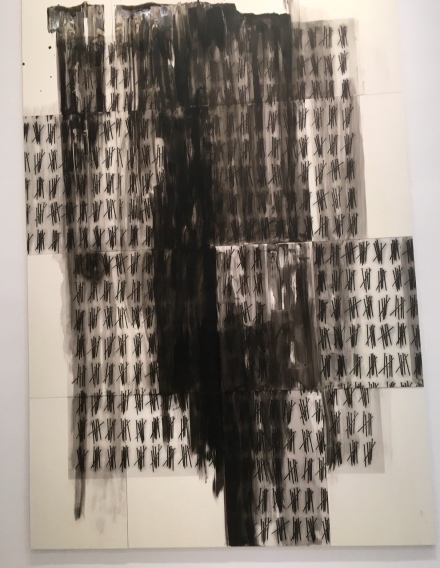 Much of Simpson’s past work has revolved around these magazine images and their depictions of hair, a particularly strong and recurring thread in the artist’s work that allows her to address specific experiences in the Black American experience.  Hair serves as a vector through which the artist’s work can function along many threads of personal and cultural iconography, and Simpson continues this approach through a wider focus on the body as a whole.  Part 1 Part 2, for example, consists of four sets of eyes peering out from a light backdrop, returning the stairs of the viewer.  In the context of the rest of the exhibition, from Ebony magazine images and the bodily symbolism it recalls, the work inverts the typical gaze and serves to, as much of her work does, reclaim an sense of self within its frame. 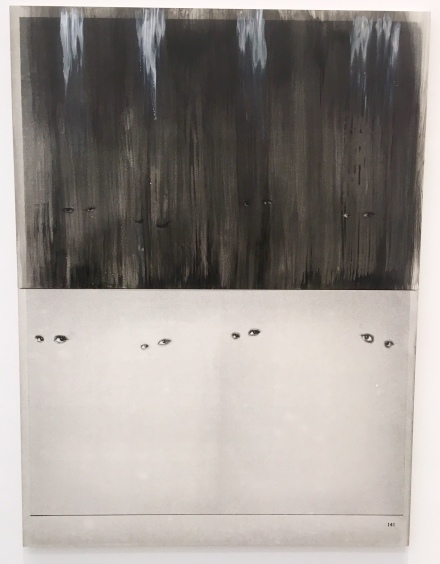 Simpson has been lauded in the past for operating within the language and status of the documentary photo. As is evidenced in the pieces on display at Salon 94, as well as much of her past work, Simpson’s employment of symbols and of collage has helped to bring the photograph, a tool of advertising and reporting, into the realm of conceptual art.

The beauty of the exhibition plays with proportion, but ultimately emerges when that line of symmetry is broken down. It is in this break and following recreation that Simpson constructs a new identity from fragments, reflecting and reforming the tropes of consumer culture.

This entry was posted on Wednesday, October 12th, 2016 at 2:54 pm and is filed under Art News, Featured Post, Show. You can follow any responses to this entry through the RSS 2.0 feed. You can leave a response, or trackback from your own site.