New York – Sol LeWitt at Paula Cooper Gallery, in Conjunction with a Show of Works by LeWitt and Liz Deschenes, Through October 22nd, 2016 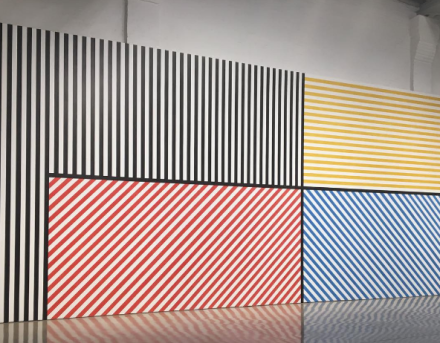 Sol LeWitt, Wall Drawing #368: The wall is divided vertically into five equal parts. The center part is divided horizontally and vertically into four equal parts. Within each part are three-inch (7.5 cm) wide parallel bands of lines in four directions in four colors. In each of the other parts, three-inch (7.5 cm) bands of lines in one of the four directions. The bands are drawn in color and India ink washes. Red, yellow, blue, ink, India ink 3” (1982), via Art Observed

Spread across all three of Paula Cooper’s Chelsea spaces, the gallery has embarked on a major celebration of the work of Sol LeWitt, posing a series of exhibitions that explores the range of the artist’s conceptual oeuvre, both as a solo artist, and in his historical impact on the development and evolution of art in both the 2oth and 21st Century.  Combining this diverse range of perspectives and interpretations of the artist’s work, the show is a fittingly nuanced exploration of an artist whose work continues to influence the progression of the field today, almost fifty years after his first exhibitions of work. 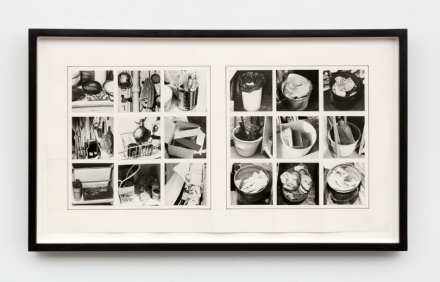 On view at 534 West 21st Street are a series of LeWitt’s Wall Drawings, his iconic works that allow a certain degree of creative divergence in the creation and exhibition of the pieces.   Comparing the various results that stem from LeWitt’s almost uniform style of instruction (providing a series of steps and progressions to realize the piece), the works invariably underscore the participatory nature of their creation, as the varied decisions of their creators present an endless series of variations from exhibition to exhibition.  Here, however, LeWitt’s pieces take on a striking investigation of the forms and materials in play, with one room presenting a more traditional wall drawing, executed with massive stripes of black, white, red, blue and yellow applied directly to the walls, while a work close by presents a series of fragmented styrofoam pieces in black and white. Split between the jagged, broken shapes of his styrofoam works, and the relentlessly hard-edged techniques of the other room, the show presents a body of work in constant evolution, varying based on process and form, in exchange with the materials themselves. 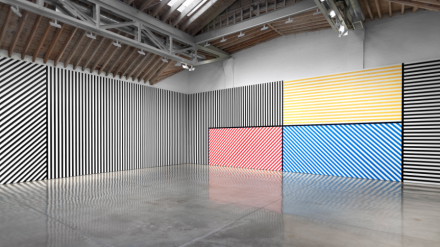 Sol LeWitt, Wall Drawing #368: The wall is divided vertically into five equal parts. The center part is divided horizontally and vertically into four equal parts. Within each part are three-inch (7.5 cm) wide parallel bands of lines in four directions in four colors. In each of the other parts, three-inch (7.5 cm) bands of lines in one of the four directions. The bands are drawn in color and India ink washes. Red, yellow, blue, ink, India ink 3” (1982), via Paula Cooper

LeWitt’s work was offered an additional wrinkle when placed in conversation with a body of new pieces by artist Liz Deschenes.  Drawing on LeWitt’s photographic practice, which often saw the capturing and alteration of various images through simple geometric forms and uniform operations on varying topographic photographs, maps and signs, Deschenes explores these same geometric representations of space as a physical structure.  Her sculptures, surrounded by a series of LeWitt’s photos, activate his forms in the gallery space itself, allowing an understanding of how the artistic operation can rupture the logic arrangement of a site, even as it is translated from a conceptual map or concept, into space itself.  Deschenes’s work here paint LeWitt’s operations as something of a proposed concept, and pulls its conceptual tenants out from the page into the gallery itself. 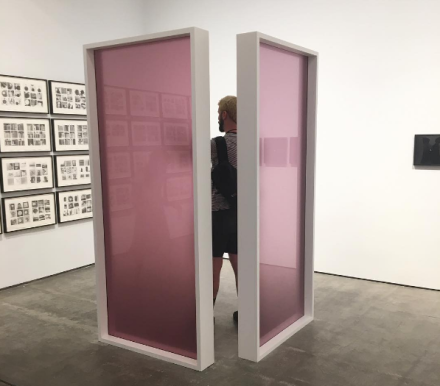 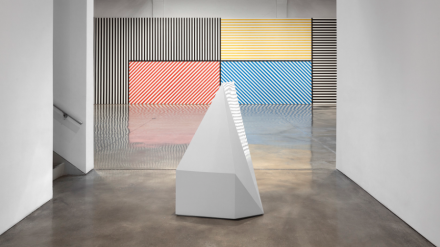 Accompanying this pair of shows is 12 x 12 x 1 TO 2 x 2 x 6, a modular cube sculpture by the artist, on view in the gallery’s small window exhibition space at 529 West 21st Street.   Gazing out into the street, the work feels like a fitting middle ground between Deschenes and LeWitt’s concepts of activated space, an object presenting its rigid logic to unaware passerby, yet held away from the viewer by a pane of glass.  Held back from participation in the world outside, the work shows a certain clinical operation that LeWitt’s work helped to underline as a function of conceptual art, tracing broader practices within the gallery’s limits, while allowing the language future artists to push beyond them.

LeWitt’s work is on view at 534 W 21st Street through October 22nd.  His show with Deschenes closed on October 8th. 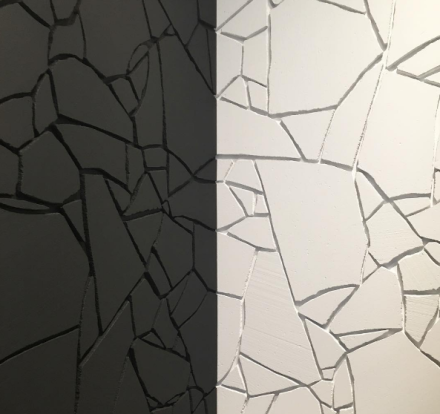 This entry was posted on Wednesday, October 19th, 2016 at 12:48 pm and is filed under Art News, Featured Post, Show. You can follow any responses to this entry through the RSS 2.0 feed. You can leave a response, or trackback from your own site.