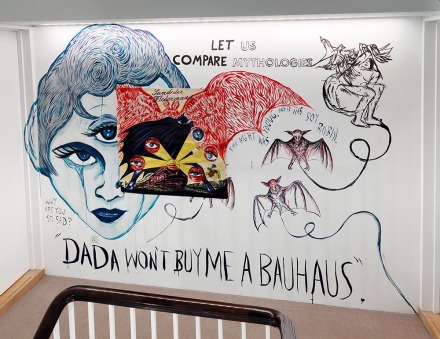 Recently closed on November 12, David Zwirner (London) presents Let us compare mythologies, a show by Marcel Dzama and Raymond Pettibon. Both artists have been represented by the gallery since the mid-1990s, but their collaboration began only in the summer of 2015. At this time, the artists swapped a series of paintings to complete for each other. They developed each other’s work with illustration, collage and writing, in a variation on the “exquisite corpse” method (in which partners collaborate on a single concealed drawing). This collaborative technique or game was used by the Surrealists to produce works in the early twentieth century. In this exhibition, it is nearly impossible to tell where one artist’s portion ends and the other’s begins—indicating how both strove to create a single coherent piece together. 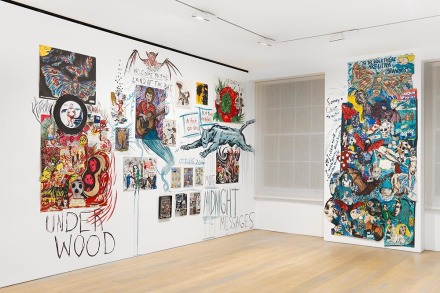 Let us compare mythologies includes drawings originally made for the zine published by David Zwirner Books. A limited edition zine that marks the artists’ third collaborative publication to date will be released on the occasion of this exhibition. Pettibon has been making his own zines since the late 1970s, and art books constitute a significant part of both artists’ practices. 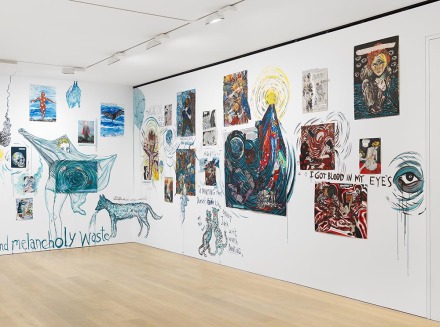 The humor and playfulness of the works in this show certainly speak to the playful dynamic of a Surrealist game. The artists evidently both sought to mirror, compliment, or mimic each others’ styles in an attempt to create a seamless if absurd product. According to the press release, this consistency within the collaborative project speaks to “how both [artists] strove to assimilate the other’s vision or anticipate his response.” Indeed, many of the works read as a single narrative or page taken out of the middle of a graphic novel. 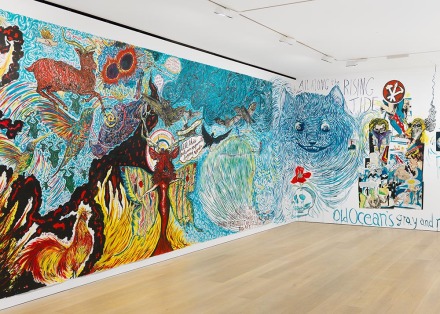 In the titular piece, “Let us compare mythologies… Dada won’t buy me a Bauhaus” is scrawled on a wall of the gallery. The language and the collage-like composition of these pieces suggest the influences of a sort of frenetic comic-book narrative. In many of the pieces, complete sentences scrawled over or alongside forms seem to serve the purpose of both captions and punch lines to the individual images. The level of detail etched into the at times incredibly dense drawings suggests the possibility for a decoding of these images whose very authorship is indeterminate. 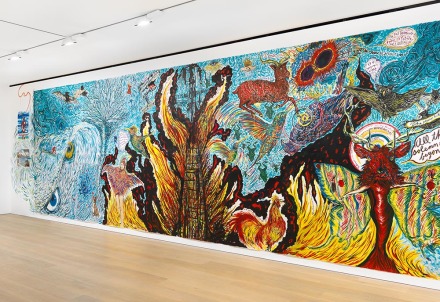 This exhibition plays on themes of the epic in literature, promising the structure of narrative reason in sequences of drawn panels and the possibility for decoding hidden messages behind pop culture mythology. The immersive, impressive exhibition reads like a game of continuous free-association, spreading and expanding across the walls of the gallery. The images and words bleed into each other, creating an impressive illustration of the senseless, seamless constitution of thought. Let us compare mythologies is an incredibly successful Surrealist experiment in what the interior reaches of the psyche might look like.

This entry was posted on Sunday, November 13th, 2016 at 8:16 pm and is filed under Art News. You can follow any responses to this entry through the RSS 2.0 feed. You can leave a response, or trackback from your own site.