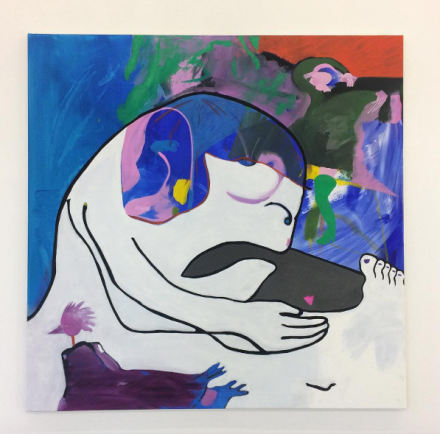 Continuing an exhibition plan at his Chinatown exhibition space that has charted a more exploratory and adventurous departure from his usual stable of artists, Gavin Brown has invited the Swiss painter Vittorio Brodmann to show a body of new works at 291 Grand.  Welcoming the painter’s sense of wry surrealism and cartoonish abstraction, the show is a fitting reintroduction to the city for the young artist, bringing a body of fresh compositions that continue his technique to the canvas. 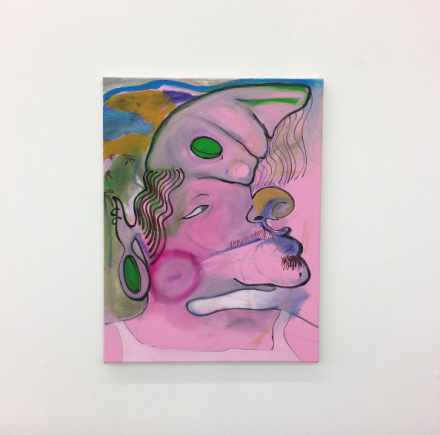 Vittorio Brodmann, Beyond the Pale (2016), via Art Observed

The downtown art scene has shown a wealth of interest in more illustration-influenced compositions in past years, as a number of shows and projects have focused on looser approaches to figuration, often drawing on comic culture, the later work of Philip Guston, and alternative histories of illustration and animation to explore the body and its relation to the painter’s hand.  Brodmann’s work fits in with these recent developments for certain.  His use of seemingly effortless curves and washes of color draw similar reference points, particularly in his pieces depicting strange animals and mutated, yet vaguely human forms.  Yet there’s something further afield in the artist’s work as well, a sense of the history of abstraction more broadly that lends his pieces a renewed energy that sustains itself well beyond his cartoonish figures.  His paintings are bathed in color and divergent series of moving parts, often moving from studied, colorful abstraction through into moments that recall the most dream-like Marc Chagall canvases and back, held together by the tension his various adventures on canvas create through their proximity. 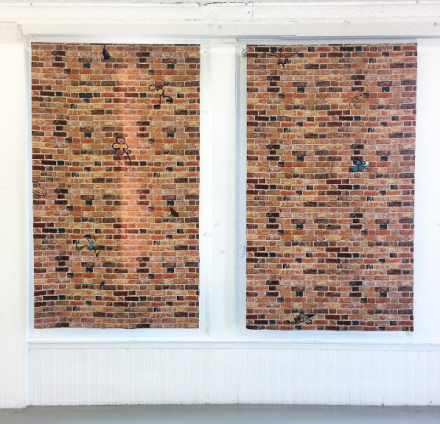 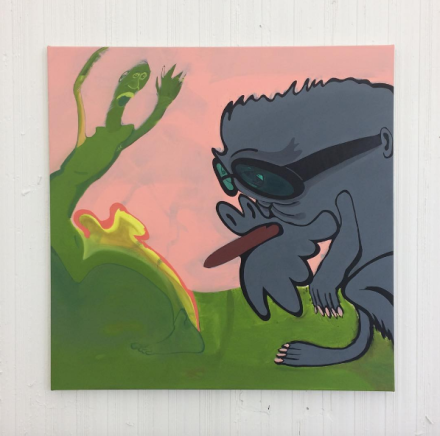 Elsewhere, Brodmann’s sense of the line and the application of paint itself informs the relations between his figures.  In one piece, a pool of green paint swells up into the shape of a distended human figure, arms waving and mouth wide open.  Moving between foreground and background, the relationship between figures and forms creates a negotiation in focus, drawing the viewer into a careful consideration of emphasis and interaction between color, form and line itself, well past the artist’s own sense of the figure.  In another work, this same meditation is applied with a far more minimal, yet equally humorous approach.  Depicting what appears to be a forlorn, fish-like creature in the foreground, the artist’s inclusion of an equally dissatisfied face on a fruit hanging just outside the window makes for a sudden visual punch, subverting initial readings of the work with sudden, unexpected narratives. 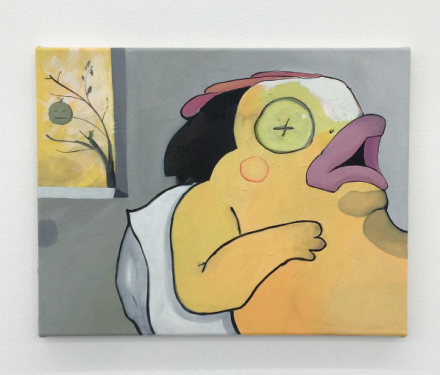 Considering Brodmann’s work, and its historical underpinnings, the sense of humor that pervades his compositions is of a distinctly complex nature.  Rather than merely drawing on the form itself as a source of subversion for the painterly frame, the artist’s forms ultimately enter into more subtle and refined interactions, systems of meaning and construction that bring the work’s construction, and the artist’s eye, to the forefront.

The show is on view through November 13th.

This entry was posted on Monday, November 7th, 2016 at 2:30 pm and is filed under Art News, Featured Post, Show. You can follow any responses to this entry through the RSS 2.0 feed. You can leave a response, or trackback from your own site.