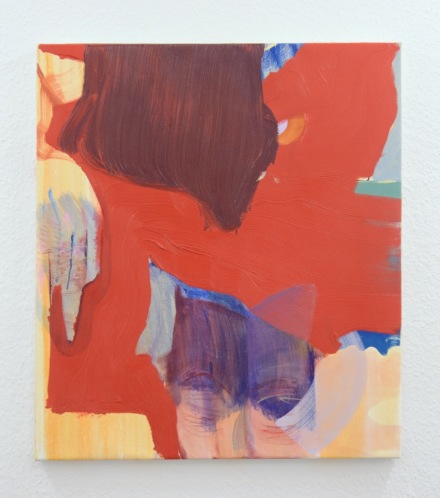 Painter Gina Malek’s new show, Underlinings, on view at Magic Beans Gallery in Berlin, is an exercise in essentialism.  The artist’s works, which draw on the fading mechanics of the human body, memory and movement, here take on a range of scenes and figures, each time drawing on juxtapositions of the body and space, and the points of conversation, transition or intermingling that stem from her approach to the canvas. 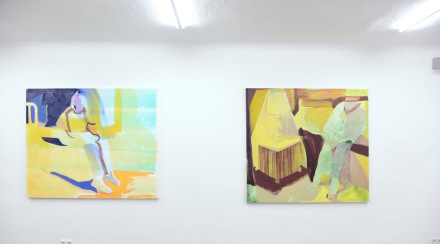 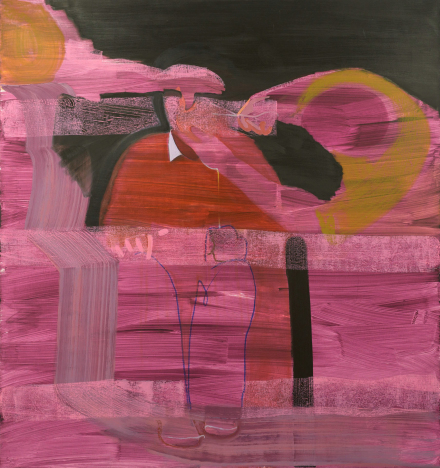 Malek’s approach to the human form is as vivid in its abstraction as it is in its formal intuition, allowing the outlines and tracings of the human shape to function in concert with the bright hues and sharp contrasts in color that she employs across her works on view. This sense of the human form, of its points of formal emphasis and the spaces where divergence or re-interpretation can either hold the line or break with easily read figuration ultimately renders figures that seem to shift and change, springing out from clouds of color and washes of paint that give the work an ephemeral, ghostly quality, as if each figure’s actions were in the process of fading from memory.  In one work, a squat sitter seems to compress as his form moves from cleanly executed (with clear boundaries of body, clothes and ground) to flushes and swirls of soft pink.  The presence of what appears to be a second figures, wiping their hand across the face of the first, gives the work an additional layer of abstraction. 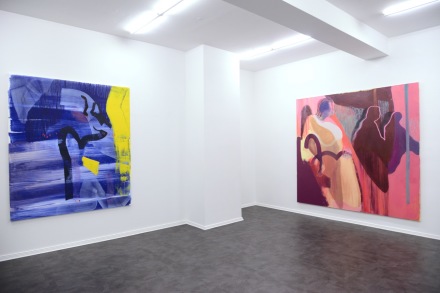 Throughout, the figures and their obtuse narratives are complicated or furthered by their indefinite groundings.  In another work, Touch, a sitting figure reaches out into a sharp jag of dark blue paint, while the recipient of this gesture remains clouded and mysterious.  Like in many of her works, this sense of the indefinite, of the sum total of abstraction emerging from a compilation of unspecified forms and gestures, sees the artist pushing the figurative portrait to a point of deconstruction.

At the same time, this sense of gesture and movement takes center stage for the artist, seeking to capture the more dynamic elements of simple actions through emphasis on line.  Her figures’ movements are emphasized by the most essential of elements; hands, legs, and the spaces around them.  While Malek leaves enough on the canvas to maintain her figures’ presence in the space of the frame, the embellishments and inflections she traces over and around their forms ultimately speaks to an engagement with the world around them, executed with a technique that allows that same world to come rushing in.

Malek’s work is on view through December 22nd. 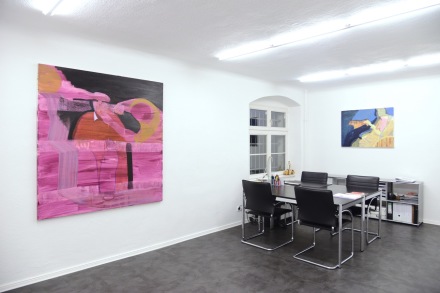 This entry was posted on Sunday, December 18th, 2016 at 1:57 am and is filed under Art News, Featured Post, Show. You can follow any responses to this entry through the RSS 2.0 feed. You can leave a response, or trackback from your own site.