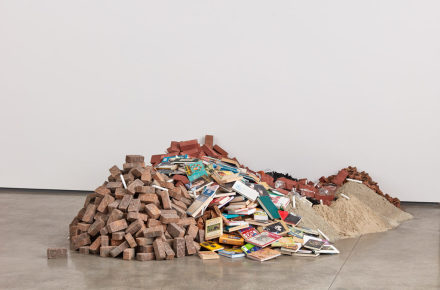 Now through February 25, the David Kordansky Gallery in Los Angeles hosts new work by Swiss artist John Armleder. This is the artist’s first show in the city in over 15 years and presents an array of wall paintings, several types of painting on canvas, and “installation-based gestures made in response to the overall effect produced by the other objects”, according to the press release. The show coincides with another exhibition of Armleder’s work in New York City at the Almine Rech Gallery. 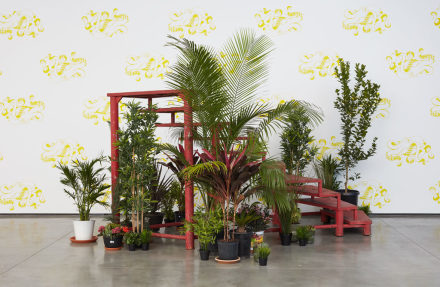 Armleder’s work spans mediums, ranging from painting and sculpture to design, installation, and performance. His pieces are loosely connected by a non-hierarchical and democratic understanding of art that incorporates humor, appropriation and chance into the process of art production and consumption. The conceptual music of American composer, artist and philosopher John Cage reportedly inspire much of Armleder’s visual expression. Over the course of his five-decade career, Armleder has looked to Cage’s radical explorations in music and sound to test the boundaries of the visual arts. Emerging from the Fluxus movement of the 1960s, Armleder was an influential member of the Geneva-based Groupe Ecart through the ‘70s and ‘80s. 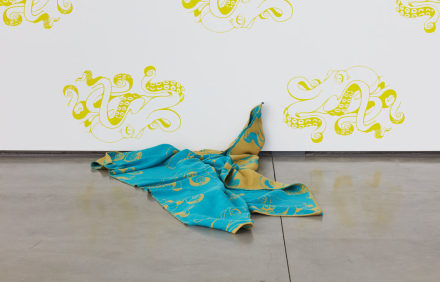 The solo exhibition of Armleder’s work at David Kordansky coincides with the announcement that the gallery is now representing the artist. Furthermore, a show of Armleder’s work is taking place concurrently at the Almine Rech Gallery. The Los Angeles exhibition is centered on his newer work, while a survey of Armleder’s career will be presented in New York. These bicoastal shows are indicative of the growing recognition the artist is receiving in the United States, which he has long enjoyed in Europe. 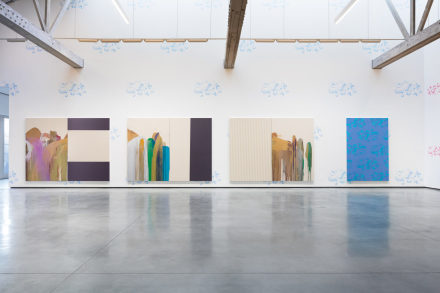 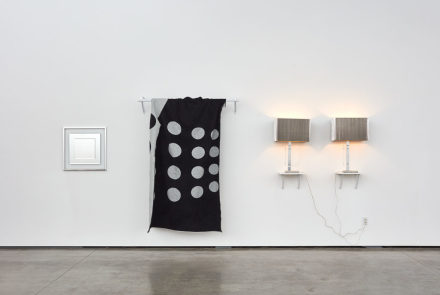 At the David Kordansky Gallery, the pieces on view come together to create a whimsical but bold coherence. The strength of this show comes from the conversation created by the pieces it includes. Immersive, large-scale paintings hang near piles of brick, glass, and books. The assemblage of domestic objects and industrial material together creates a deeply satisfying spectacle the unrelated. The image of an octopus from a stencil designed by Armleder appears on canvas, as wallpaper, fabric and an enormous blue mural. The sea creature seems to preside over the exhibition, adding a layer of pop art to the variety of influences and voices present in the paintings, installation and sculpture on view in the gallery. However, Armleder resists categorizing his work according to any single genre. As he stated in an interview, “I think the art should work on its own, the people who look at the works invent the works again, and the artist is just a side effect.

This entry was posted on Wednesday, February 22nd, 2017 at 6:43 pm and is filed under Art News, Featured Post, Show. You can follow any responses to this entry through the RSS 2.0 feed. You can leave a response, or trackback from your own site.