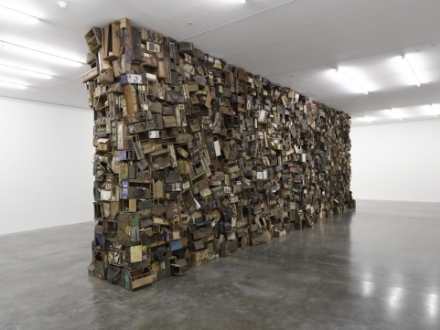 Since his step onto the world stage at the 2015 Venice Biennale, artist Ibrahim Mahama has garnered impressive critical attention for his use of reclaimed jute sacks and other cast-off materials.  Drawing on the intersections of capitalist exchange, material decay, and commercial detritus, Mahama’s work uses structure and use as indicators of failed and fluctuating economic systems.  This practice takes on new elements and variations in the artist’s current exhibition at White Cube in London, his first solo exhibition in the UK, and a powerful introduction to the artist’s attentive, challenging body of work. 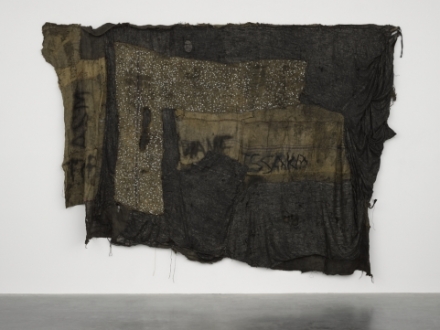 For Mahama, the materiality of his chosen subjects, from jute sacks to shoe shine tools, carry a significance in the sudden changes caused by economic crisis or necessity in what first-world banks would label “developing economies.”  The jute sack is a particularly striking example in Mahama’s work, its rough-shod surfaces bearing the traces of various cargo over the course of its life.  Originally functioning as a carrier of cocoa beans for transport or export, these bags take on new functions and uses, including carrying food, machine parts and other goods.  Literally treating these objects as “extracts” from the flows of goods and capital, Mahama turns the very material of transaction into a compositional element, suspending them in dense networks threaded by rope and electronic components, often bearing texts and writing that emphasizes their roles in the exchange of goods. 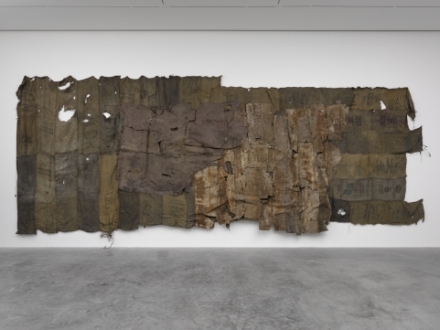 Yet Mahama equally draws on the fraught colonial history of the country, and the overlaid relationships of European power to the economic history of Ghana, particularly in one work, Gemtun Boxe, which mounts leather from a German Henschel train atop these sacks, referencing the prior occupation of portions of Ghana by the European superpower, and the technological innovations built on the back of the country’ economic exploitation.  While the artist’s exploration of materiality centers on the hand itself, and its role in the exchanges of modern capital, the artist’s historical lens always seeks a more complex, nuanced reading of these conditions. 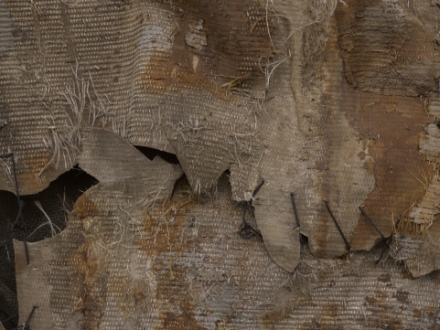 The artist’s work takes on a different note in Non-Orientable Nkansa, a veritable wall of shoemaker boxes (themselves haphazard assemblages of salvaged material) emphasizing the imbalances of power and exchange in urban areas (the shoemaker’s labor in service of middle class appearance), while building its scale to an imposing measure.  Mahama casts these precarious laborers en masse, turning their individual efforts into an enduring form that echoes the challenges of their work.  Each object, balanced carefully atop others, bears the marks and stains of work; handprints, rag marks, stains and dents (from the shoeshine boys’ habit of pounding the box to advertise their services) that speak to the constant presence of tangible, human labor undergirding other systems in Africa’s economic eco-system. 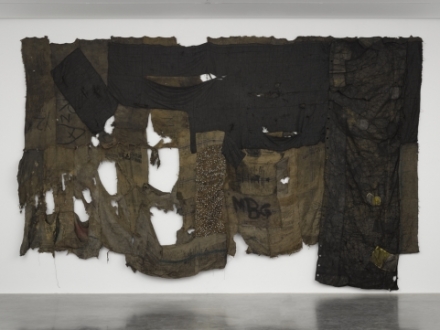 Working on a direct, object-oriented level, Mahama’s work is able to point to concrete artifacts and their significance as containers of both labor value and broader systems meaning in modern Ghana, funereal drapes and monuments to hierarchies of labor that have come with the country’s current economic state.  Combining these works with maps and other documents bearing both official information and personal interpretation, the artist explores the plural meanings and human hands at play in increasingly complex global systems.

Mahama’s work is on view through April 13th. 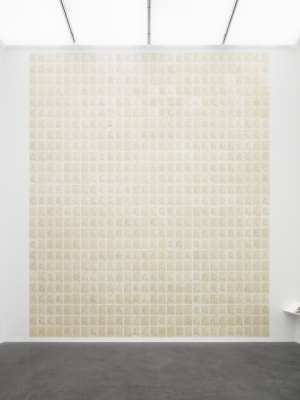 This entry was posted on Wednesday, March 22nd, 2017 at 12:20 pm and is filed under Art News, Featured Post, Show. You can follow any responses to this entry through the RSS 2.0 feed. You can leave a response, or trackback from your own site.