New York: Robert Therrien at Gagosian Gallery Through May 26th, 2017 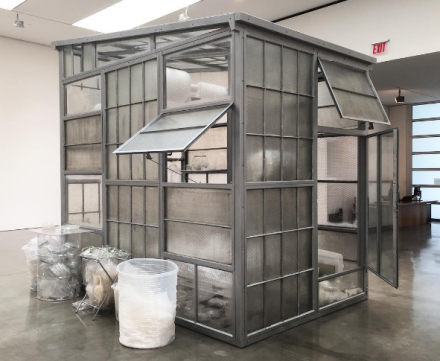 Cataloguing a range of Robert Therrien’s nuanced explorations and elaborations on the physical and psychological landscapes of the everyday, Gagosian Gallery has brought a body of new and recent works to its 24th Street exhibition space in Chelsea.  Marking the artist’s first exhibition in New York in ten years, the show marks a fitting continuation of Therrien’s interests in domestic space, memory and form through a series of sculptures, large-scale environments and works on paper. 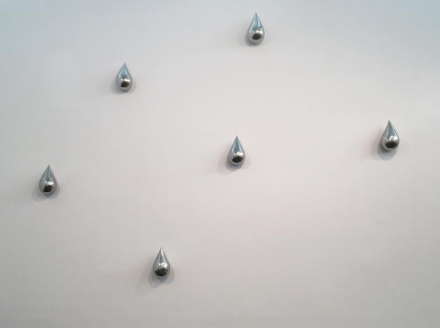 Therrien’s pieces frequently dwell on the intersections of space and form, and the subtle inflections of human interpretation or memory that emerge from these points of intersection.  His pieces pull on familiar objects or scenes, and build them up to monumental scale, allowing the viewer a sense of distended familiarity with the works that pushes at extended experiences and frameworks for encounter with the work.  These facets of Therrien’s work run throughout the show here, using familiar forms such as an immense bow or an oversized oil can, yet uses position and scale to create breaks in the objects’ relations with the world around them.  A flagpole sculpture in one room, for instance is shaped to give a perspective from far above the ground, as if the viewer were sailing by a flagpole many feet above ground level and looking back down from the top of the pole. 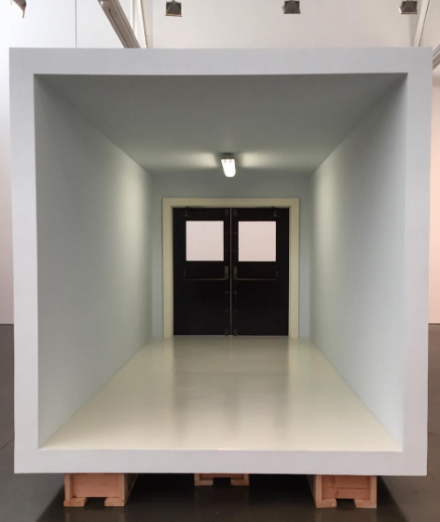 Elsewhere, Therrien’s work obscures easy spatial or contextual interpretation by other strategies.  In one room, his Transparent Room (2010) is a striking contrast, a ghostly structure filled with detritus and empty containers that feels immediately familiar, yet held back from easy legibility.  Therrien’s work gives off the sense of a scene involved with its own internal narrative, one that offers only an uneasy sense of imbalance and irrationality.  This same sense of structure and perception runs through the artist’s other large-scale works on view in the show, several additional “Room” sculptures that draw on their cohesive sense of a closed, highly-organized space.  One work, featuring a long blue hallway bathed in fluorescent light and capped with a set of panic doors at its far end, creates a sense of intense stillness, and a familiarity that blends memories of hospital corridors, school hallways and other institutional spaces that leaves the viewer in a space of indeterminacy made all the more vivid by the stark fluorescent lighting and monochrome paint job that dominates the work. 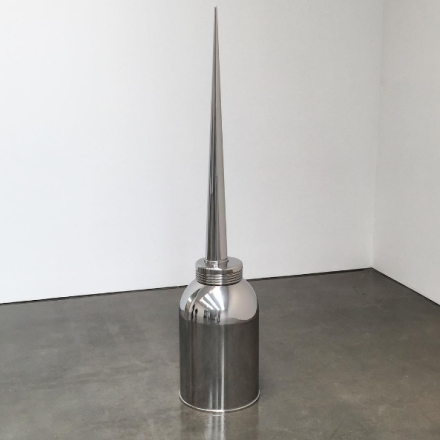 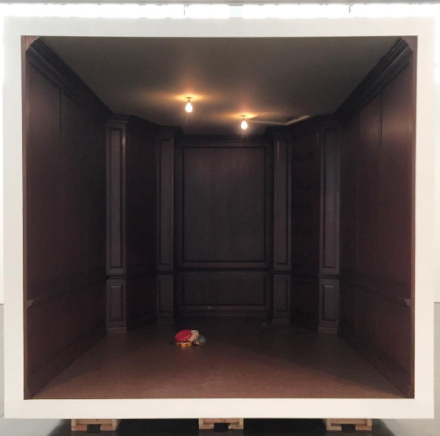 By contrast, another “Room” is covered in wood paneling, giving off a sense of wealth and status that is disrupted by an unexplained series of tambourines sitting on the floor, and the lack of any additional adornments on the walls of the room.  In each case, the viewer’s associations and readings are reduced to a small series of visual stimuli, yet barely enough to fully inform the space itself.  The result is an environment that both pushes against the viewer’s own readings and constantly holds them at a distance.  The resulting space feels strangely empty, as if the viewer was passing through their own memories without any real elements or aspects to truly grab hold of.

Therrien’s works are on view through May 26th.

This entry was posted on Wednesday, May 24th, 2017 at 12:40 pm and is filed under Art News, Featured Post, Show. You can follow any responses to this entry through the RSS 2.0 feed. You can leave a response, or trackback from your own site.