New York — “Lyric on a Battlefield” at Gladstone Gallery Through July 28, 2017 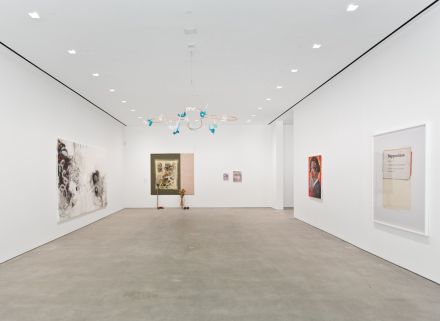 “No one writes lyric on a battlefield. On a map stuck with arrows,” begins Quarto, a 2009 poem by the feminist author and essayist Adrienne Rich. Adopting its name from the metaphorical expression Rich uses in her poem’s first line, Gladstone Gallery’s summer group exhibition, Lyric on a Battlefield, seeks impressions of beauty inherent in the struggles and joys of everyday experience through the poetic and personal narrative of life. Organized by Miciah Hussey, the exhibition pairs established names such as Suzanne McClelland, Anne Collier, and Ellen Berkenblit with a younger generation of artists like Monique Mouton and Louisa Clement. 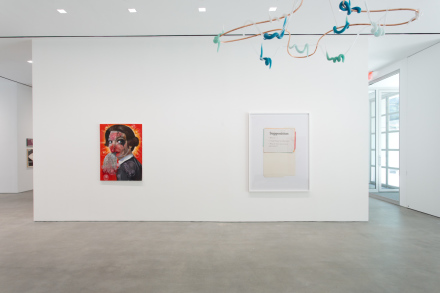 The introspective and meditative nature of the lyric, in terms of offering a highly subjective interpretation of time and space, infuses each juxtaposition of collective human experiences, like loss, intimacy, and memory, with a sense of vivid and often urgent vitality.  Presented here, the show’s works turn this sense of humanity into a powerful rumination on modern society, and the varied experiences that undergird our negotiation with everyday existence.

The biggest discovery of the exhibition is f.marquespenteado, the gender-nonconforming pseudonym of the Brazilian artist Fernando Marques Penteado, who combines traditional embroidery methods with found objects and text to orchestrate installations brimming with complex narratives. Although the artist is an established name in his native country and in Europe, his presence in New York has remained somewhat limited, with the exception of his inclusion in the Jewish Museum’s 2015 group exhibition Orthodox, which had aptly focused on artists outside mainstream dynamics of the art world.

The artist’s ability to infuse emotion, sensuality and soul to everyday objects allows him to marry domesticity with sexuality, while his texts add a sense of vivacity and character to his often mundane materials. The embroidery he accentuates and defamiliarizes his arbitrary objects which stems from a dedication to a practice that has been traditionally associated with feminine labor. In one of the installations, two pairs of clogs are placed in front of a wooden rake and dried flowers, standing in for a pair of absent bodies of two male lovers whose relationship is recounted through an imaginary interview conducted with one of them. 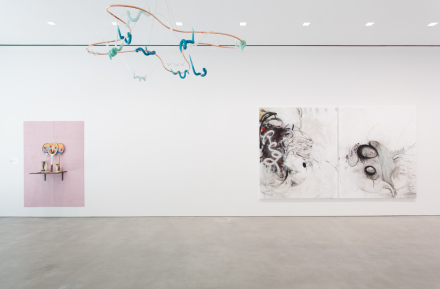 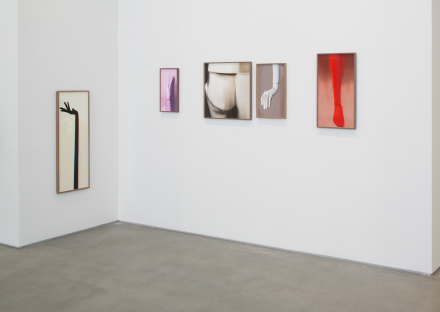 By contrast, Suzanne McClelland’s large scale double-sided painting Reg Park and the Hard Gainers exemplifies the Brooklyn-based painter’s decades-long investigation of text, data, and image culture through the lens of American ideals such as success, fame, and class. What appear on the surface as tempestuous and fervent abstract paintings, emanating from loose hand gestures, encapsulate her research and analysis-heavy process regarding facts prevalent in our society, such as male privilege and unjust distribution of opportunity. Adorned with slightly abstracted letters and names, McClelland’s abstract paintings further the artist’s interpretation of information as a fluctuating entity through their double-sided natures that offer alternative paths to same ends.

This sense of text and movement, experience and action, running throughout the show makes for an intriguing engagement with intersections of text and the life it describes. Lyric on a Battlefield is on view at Gladstone Gallery through July 28, 2017.

This entry was posted on Monday, July 24th, 2017 at 12:44 pm and is filed under Art News, Featured Post, Show. You can follow any responses to this entry through the RSS 2.0 feed. You can leave a response, or trackback from your own site.