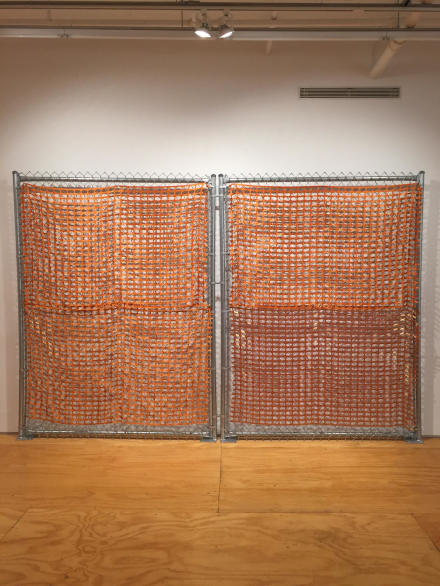 For the last several years, the artists represented by 47 Canal have stood at the forefront of contemporary sculpture. It is easy to see the influence of artists like Josh Kline, Anicka Yi, and Amy Yao when looking at the work of younger artists exhibiting at galleries like Hotel Art Pavilion and Real Fine Arts, and their investigations of materials inextricable from the landscape of modernity makes them a distinctly notable entry in the evolution of New York’s arts history.  Amy Yao, who splits her time between Los Angeles and New York, brings her work back to 47 Canal this month with her new exhibition, Weeds of Indifference. Though Yao has had solo exhibitions in Los Angeles, Oslo, and Paris within the last two years, Weeds… is her first solo show in NYC since 2013. In that interval, Yao’s work has lost none of its bite, but that is not to say that things are still the same. 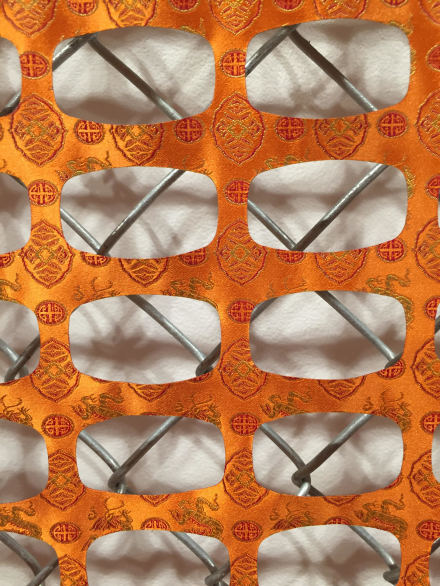 For starters, 47 Canal is in a different space than when Yao’s first exhibition, Skeletons on a Bender was presented with the gallery. Not only has the location changed, but so has Chinatown, where all of 47 Canal’s various spaces have been. Like every gentrifying neighborhood in New York, there is an influx of new businesses and new places to live. Weeds… focuses on this changing landscape and, specifically, on the idea of “authenticity.” 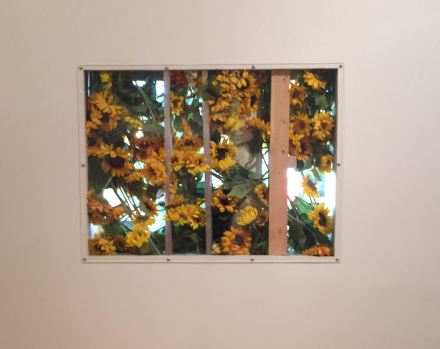 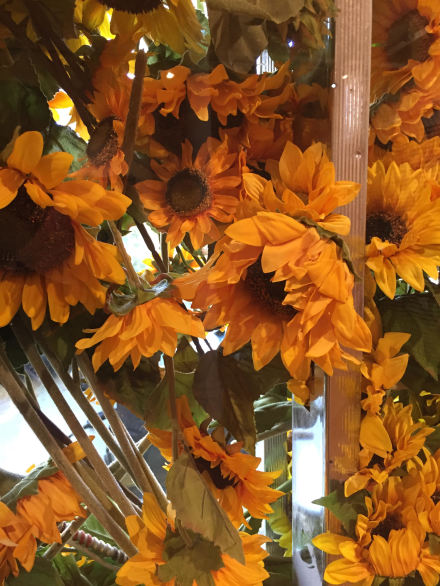 Throughout the gallery, Yao has erected chain-link fences that are covered in yellow and orange construction sheathing, a familiar site in the neighborhood. However, while mimicking the color and cut of construction coverings, Yao’s fences use silk fabric adorned with Asian floral patterns instead of plastic. This material refers to the allure of the idea of authenticity when introducing new elements to an existing area. The builders are hoping to construct something to that capitalizes on the already-in-place atmosphere of the site, while not necessarily bearing any connection to that location. While one of these fences is free-standing in the gallery—in fact it actually blocks the gallery entrance so that one has to walk around it to see the exhibition—the other two are built right up against the existing walls. The holes in the construction coverings are meant to offer a peek. 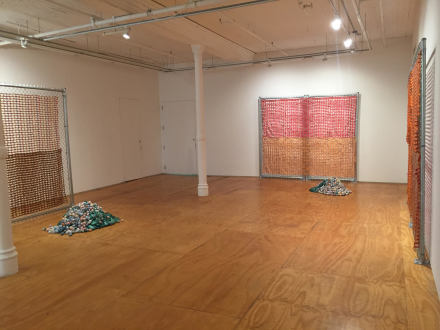 On the floor of the gallery are two piles of Easter eggs, made of some sort of hardened slime. Again, a material bait and switch takes place here: the eggs are actually cast from plastic Easter eggs, using their hollow interior as a mold to create these new, plastic eggs. These smaller sculptural works also recall Yao’s last show at Various Small Fires, Bay of Smokes, and its suspicion of “the kind of ill advised self-production, unavoidably occurring in biological bodies at sites of material transformation,” adds a striking element to the exchange with broader political engagement with the neighborhood around the gallery.  Between the floor sculptures and the fences is a conversation happening about the “natural” and the “authentic” and the plasticity that both these terms have taken on these days in consumer culture. 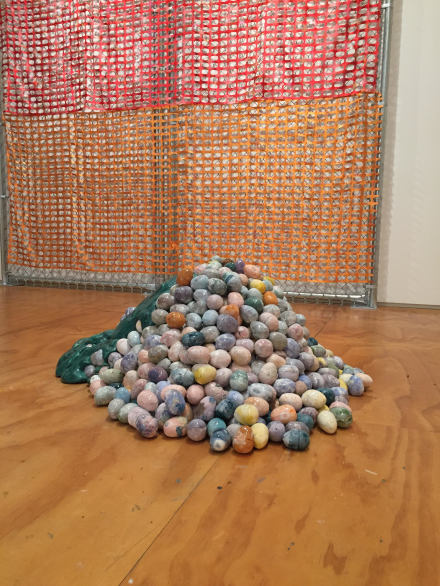 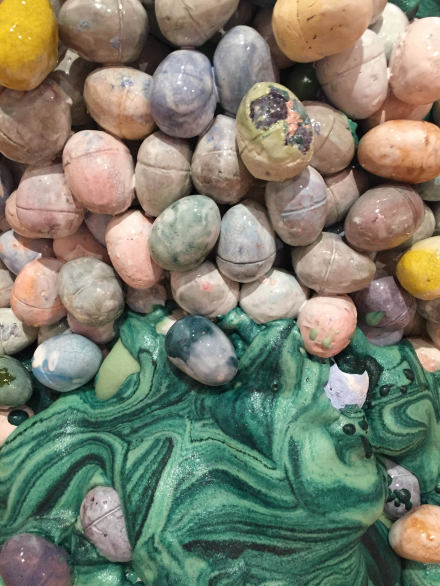 Weeds of Indifference, as well as recent exhibitions by Michele Abeles and Josh Kline, is a solid reminder of why 47 Canal caught on in the first place and why they continue to lead the dialogue on modern sculpture. Yet the show’s subject matter, and its interest in the landscape of Chinatown itself, underscores that even while some are interested in exploring the social problems inherent in modern capitalism, one is often turned into an antagonizing force at the same time.

The artist’s work is on view through October 8th.

This entry was posted on Monday, October 2nd, 2017 at 12:45 pm and is filed under Art News, Featured Post, Show. You can follow any responses to this entry through the RSS 2.0 feed. You can leave a response, or trackback from your own site.