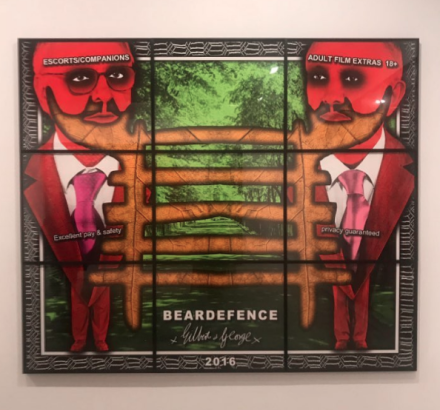 Marking the 35th Anniversary of their collaborative practice, the famed British duo Gilbert & George have opened a show of new works at Lehmann Maupin in New York City, continuing their recent, enigmatic exploration of more violent, grotesque themes through their familiar blend of pop iconography and deep personal engagement with their work.  Long-billed as a “living sculpture,” this new selection of works by the pair explore their own visages, embellished with surreal beards in each image. 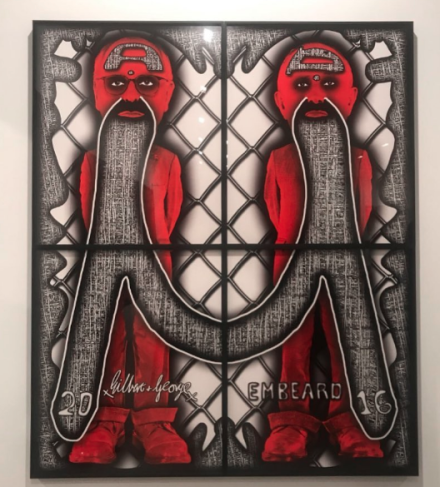 In recent years, Gilbert & George have pushed their work further into concrete engagements with the political, often incorporating barbs at religious piety, political strife and social conflict. Recent shows of works have pulled the pair’s parallel images deeper into the works, often twisted into surreal, disturbing parodies.  Here, these approaches are taken to a new level, often capping off strange renditions of the artist’s twisted, deformed bodies with loping, twisting beards.  Soaked with color, and realized with cartoonish, unrealistic textures (in BEARDTIME for instance, the pair seem to have donned unimaginably long leaves as their facial hair), the images push Gilbert & George towards a sort of ghostly, otherworldly figures, only connected to this world by the coy puns and figures their beards form in each picture. 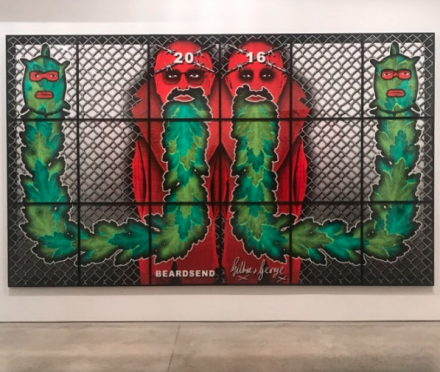 Embracing strange arrangements of their facial hair, the pair are often joined by their flowing locks, with each picture twisting the shared beards into ghostly images of other forms and figures.  “Beardgate” reads one image, playing on notions of political strife while showing a literal gate sculpted from the pair’s billowing hairs.  In another, BEARD HONOR, the pair spew a series of great leaders and political figures from their faces, as if their faces have become the place at which these political heritages have ultimately been engrained.  This evaluation of political and national iconographies are further embellished by the barbed wire and fencing dotting these works. 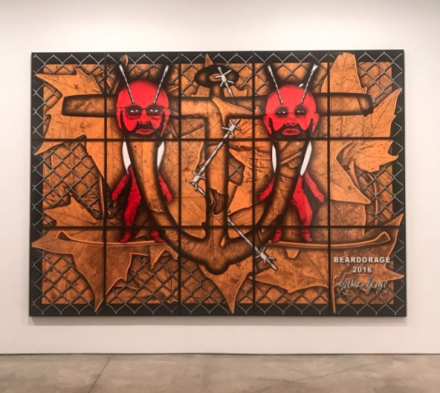 There’s a distinct sense of patriarchal critique running throughout the show, as the pair embrace both the visual power of a flowing beard, and its implications of masculine political and social power. These are images scarred and warped around perhaps the most enduring image of the male body, its bearers in these images comically twisting its connotations of wisdom and experience into comical, often bizarre arrangements that pull broader social trends in England and Europe into focus.  Literally “putting on” these evocative beards, the artists’ bodies become a site for re-evaluation, meditation, and even potential change.

The show is on view through December 22nd. 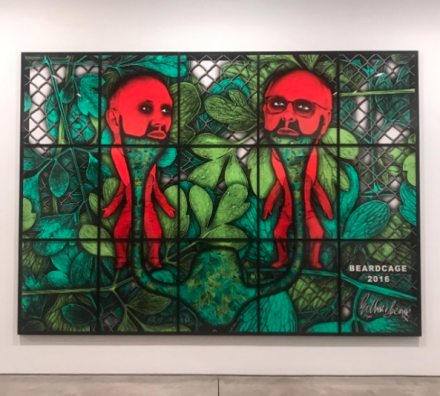 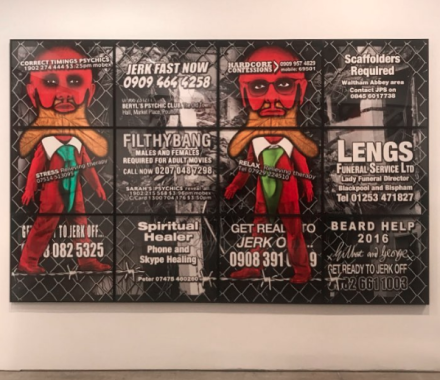 This entry was posted on Tuesday, November 21st, 2017 at 7:09 am and is filed under Art News, Featured Post, Show. You can follow any responses to this entry through the RSS 2.0 feed. You can leave a response, or trackback from your own site.