Home » Berlin – Raymond Hains: “You know nothing Raymond: a homage by Jérémy Demester” at Max Hetzler Through January 20th, 2018

Berlin – Raymond Hains: “You know nothing Raymond: a homage by Jérémy Demester” at Max Hetzler Through January 20th, 2018 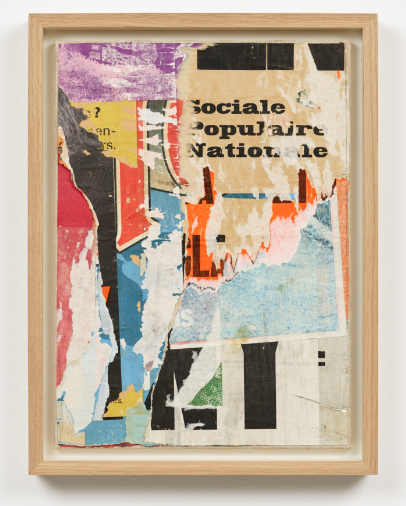 Among the flood of works on view this summer at the main pavilions of the Venice Biennale, few artists’ work managed to do as much with as little as the late French artist Raymond Hains.  Spread across a single room of the Giardini’s main structure, Hains’s mix of bastardized street posters, peculiar, sculptural arrangements of detritus and cast-off artifacts, and even the occasional poster of his own design, the artists range and insight into the various constructions of identity and cultural iconography in a world of near-constant data overload felt particularly timely. 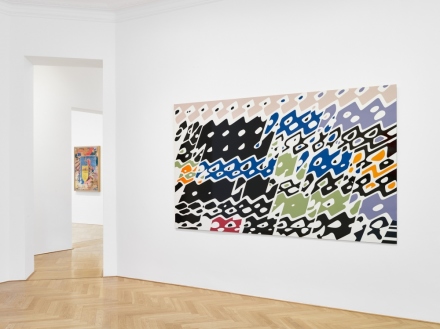 Hains, who passed away over ten years ago in 2005, seems to be on the tips of peoples’ tongues this year as a result of this show, with his pieces gaining a fresh interest from both curators and collectors.  Cue his current retrospective show at Max Hetzler in Berlin, an exhibition arranged by artist Jérémy Demester that seeks to both expand and explore the artist’s vision through a range of his unique works.

Hains’s interest in particular laid with the idea of information distortion, of the constant overload of data caused by the placement and gradual layering of advertising data on the walls of his native Paris. His early works, collected here, showcase a fascination with the moment of abstraction, when the image begins to self-destruct under the weight of its own signifiers and symbols.  Sociale Populaire Nationale, dances in and out of comprehension with its bars of color and staggering sense of movement, ultimately bathing the work’s political sub-texts under layers of slowly degrading paper.  Yet Demester’s selections equally address the artist’s later works in a similar mode, turning images and brand logos into swirling messes of color and form. 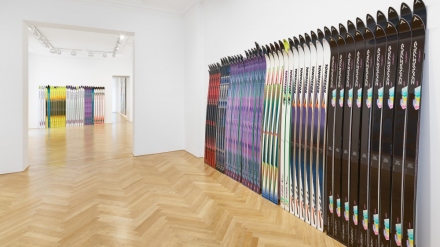 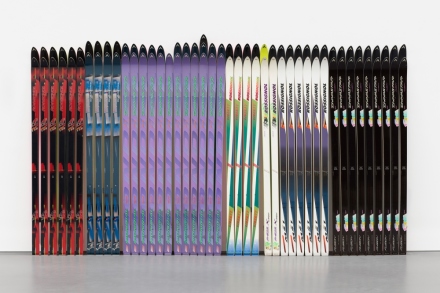 Much in the same way that Hains allowed his early works to load layers of imagery until their meanings begin to fold inwards, his later pieces, like a coy reimagining of the American Express logo, turn this function backwards.  Applying similar modes of visual distortion (seen this summer in Venice through his series of counterfeit Biennale posters), Hains lets the images themselves carry the interpretive weight, the viewer left to contend with the image’s clear meanings, and its less concrete modes of expression. Hains showed a remarkable skill in understanding this visual cache, a strength in recognizability, but equally in understanding just how far these images could be degraded or distanced from their original point in pursuit of his own ends. 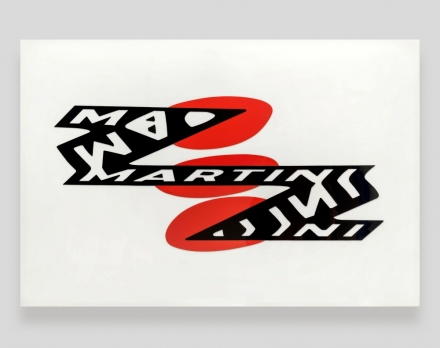 The show also includes a series of Hains’s readymade sculptures, including an intriguing wall of skis form 1997.  Much in the same way Hains detunes his images and branded materials through repetition, this series of works underscores the commodity as a source of near constant critique, its application, placement and interpretation always offering a moment of clarity and freedom, of play and subversion, in the face of modern capital.

This entry was posted on Wednesday, December 27th, 2017 at 5:53 pm and is filed under Art News, Featured Post, Show. You can follow any responses to this entry through the RSS 2.0 feed. You can leave a response, or trackback from your own site.