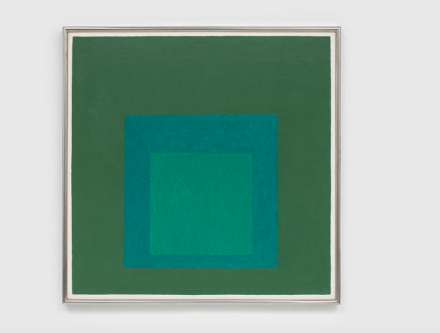 Josef Albers, Study for Homage to the Square (1964), via David Zwirner

Delving into the varied psychological and ephemeral aspects of Josef Albers’s practice, and his strong affinity for music, David Zwirner’s current exhibition at its 20th Street location, Sonic Albers, is a flowing, fluid affair.  Taking a far-reaching look at often overlooked prominence of music in both the artist’s sites of personal inspiration, and on the material aspects of his practice, Sonic Albers features a selection of paintings, glassworks, drawings, and ephemera from throughout Albers’s career, including a number of the album covers he designed in the late 1950s and early 1960s. 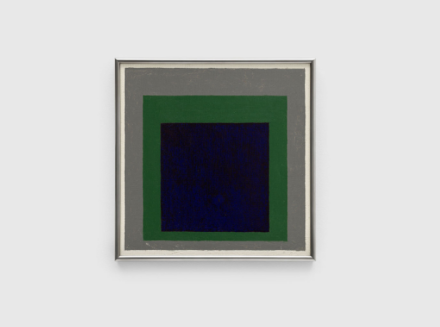 Josef Albers, Homage to the Square (1956), via David Zwirner

While Albers earned his recognition during the 20th Century in particular for his  rigorously experimental investigations of color, spatial form, and visual experience, he often found analogies to and inspiration for his work in the compositional and structural qualities of music.  In fact, a number of the theses explored in texts like Interaction of Color and other essays exploring and elaborating on his practice often posed his work in musical terms. Rhythm and spacing,  repetition and theme, each are presented as elements suspended in a sort of measure.  His works from the Variant/Adobe series, for instance, draw on systems of measure and repeated gestures as if arranging the work on a musical staff, a “score” of sorts that takes its patterns in a near-linear movement. 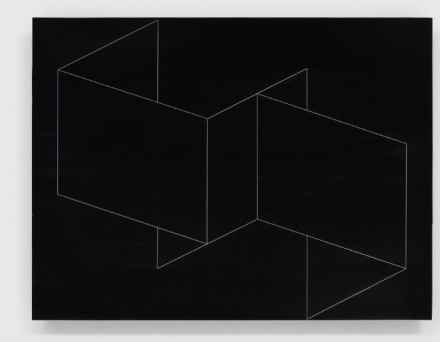 Many of the paintings from these series have titles that reference music or sound, and the contrasting and complementary use of color and form within the works reveal the principles of visual harmony and disharmony, consonance and dissonance that Albers used both in his teaching, and in his own serial production.

The artist’s work early work on view takes a more concrete interest in music: sketches of dancers and musicians that explore how the body moves in space and time, but equally its responses to the unheard cadence of the music referenced by the dancer’s movement.   These works illustrate Albers’s early interest in the rhythmic qualities of line and the interrelation between aural phenomena, movement, and visual experience. Countering this is his Structural Constellation works, engraved line pieces that trace the continued interest in relationships between line and movement. Space in these works appears to project and recede based on the relationships between the linear geometric forms, a musical composition, ever changing in its relation to the viewer’s state of perception. 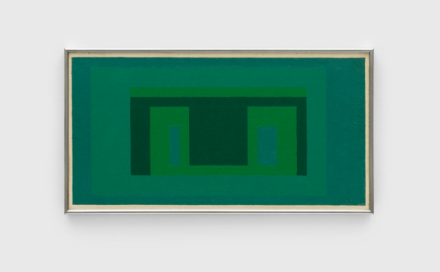 Flowing and twisting through space, Sonic Albers ultimately unveils itself as a score in its own right, a series of notes and entries in the broader orchestral arrangement of the artist’s career, a magnum opus that seems to echo through space and time within the gallery walls.

This entry was posted on Sunday, January 13th, 2019 at 8:00 pm and is filed under Art News, Featured Post, Show. You can follow any responses to this entry through the RSS 2.0 feed. You can leave a response, or trackback from your own site.