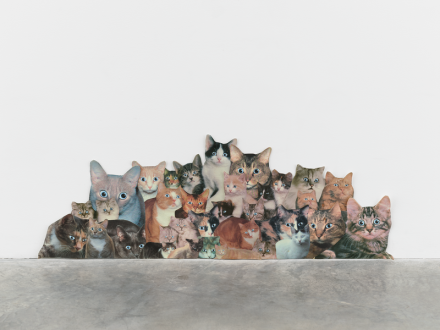 Currently on view at Matthew Marks’s spacious West 22nd Street location, a trio of artists, Lutz Bacher, Nayland Blake and Vincent Fecteau (who also takes on curator duties here) have collaborated on a striking and unique investigation of time and history. Meant to serve in part as a re-creation of Fecteau’s first solo exhibition, the show twists a series of diverse narratives and conceptual ties among the artists into a unique interpretation of the past. 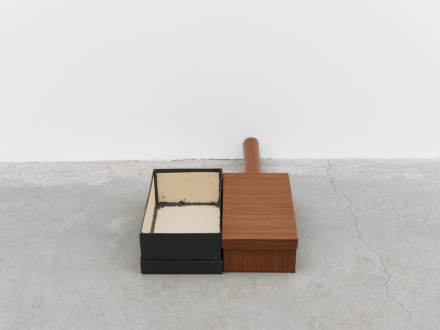 Fecteau’s first show, Ben, originally presented twenty-five years ago at Kiki, a short-lived but influential artist-run gallery in San Francisco’s Mission District, drew its title from the strange Michael Jackson theme song for the film about a boy’s love for his pet rat, and featured a series of strange collages that mixed together photographs of cats, sculptures made from old shoeboxes, and eggshells painted to look like eyes. The works’ peculiar interrogation of Fecteau’s interests, unnerving assemblages of materiality that seem to both challenge the viewer and play on the idea of scale (some of the collaged images of cats tower up the wall of the space), the colorful fusions of material seem to hint at a body always held just out of reach, as if always hinting at the creator or an absent user but never immediately confronting that presence. 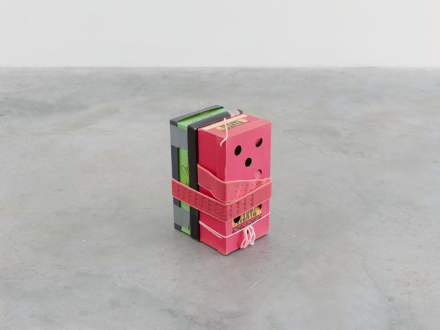 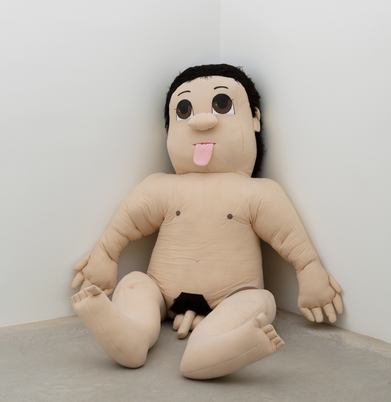 These elements are complicated by a series of intriguing ties to his fellow artists on view. Bacher’s sculpture Big Boy (1992) replicates an anatomically detailed stuffed doll, like those used in child-abuse assessments, but expands it to larger than human size. Rather than suspending the body as in Fecteau’s works, Bacher’s piece in the show seems to present a body in its place, one that helps to animate and elaborate on the systems of meaning snaking throughout the gallery. By contrast, Blake’s work in the show seems to have a particularly concrete tie to Fecteau’s time in San Francisco as well, having employed Fecteau in his studio and introduced him to Bacher. Fecteau ultimately helped in the production of Bacher’s piece. 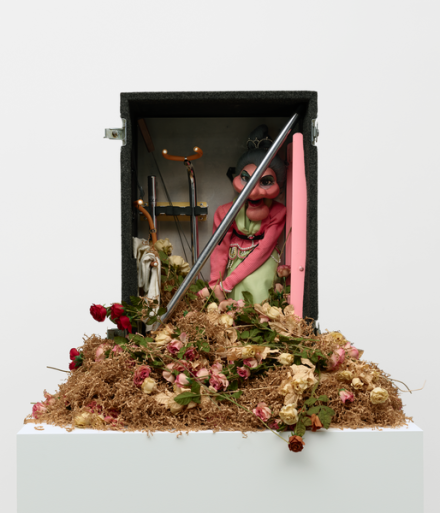 It’s an interesting series of conceptual riffs that unfold as a result throughout the show. While Fecteau’s work seems to present the body in absence, as an implied subject, the works he helped make for other artists during the time prioritize the body. The show, in turn, becomes something like a tracing of shadows and influences across each artist’s body of work, a fascinating study in aesthetics and community as multiple voices speak in unison.

This entry was posted on Wednesday, April 17th, 2019 at 7:33 pm and is filed under Art News, Featured Post, Show. You can follow any responses to this entry through the RSS 2.0 feed. You can leave a response, or trackback from your own site.