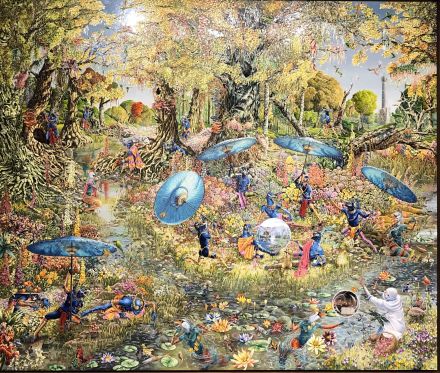 For pure opulence, it’s hard to match the canvases of artist Raqib Shaw. Pulling together disparate traditions in Indian and Western portraiture and epic painting, the artist’s work mines each historical mode in pursuit of a lush, swirling iconography that simultaneously entrances the viewer and overwhelms them with visual excess, a negotiation of forms that encourages a lingering consideration of each work. 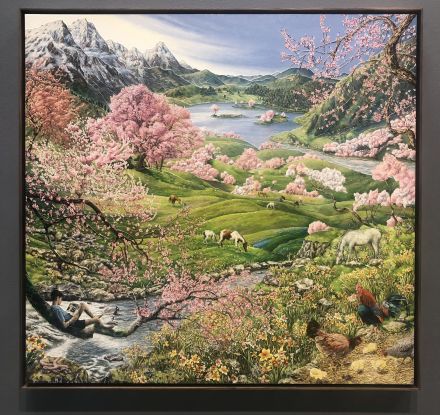 Raqib Shaw, Spring from the Four Seasons (2018), via Art Observed

The artist’s work is currently the subject of a new show at Pace Gallery in New York, marking his first entry in the traditions of landscape painting. Shaw draws inspiration here from his childhood memories of Kashmir, and the nature and architecture of the Indian subcontinent. Once again using the artist’s own personal history and memory as part of the realization of his practice, this show revisits his mode of compulsively-detailed, meticulously-painted, and emotionally-potent works through a more distant lens. Broad scenes and a range of characters dance across each work, rendering pieces that appear more as communions of varied forces than some of the epic depictions of the body and its parallels in mythic or supernatural forms. In one piece, a series of bird-headed characters fan across a hillside, carrying blue umbrellas and menacing a figure in the bottom right corner, who throws their hands up in what appears to are a mixture of awe and horror. The phantasmagoric scene conjures notes of a demonic possession or holy vision, the human subject presented with mirrored discs reflecting scenes from elsewhere, as if their life was passing before them. 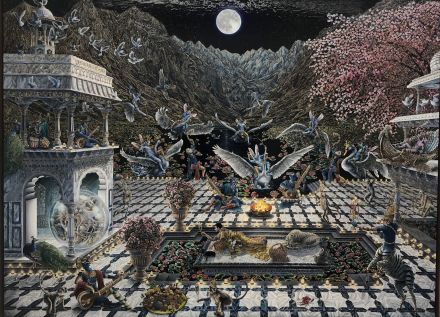 Elsewhere, the artist settles for more traditionally-rendered landscapes, massive valleys with towering trees and mountains that seem to present a similarly epic sense of space and history, yet one with the natural world taking prime focus, rather than the mythic scenes depicted elsewhere. The product of these fusions of visual depiction renders a show in which Shaw’s re-creation of both natural and man-made iconographies presents a world in which the mythic narrative man has built for the world is subtly caught up in the landscape’s own sense supernatural wonder. Even as the artist’s images explode with vivid, overwhelming images of man knocked to the ground by the grandeur of the supernatural, the world in which these images are produced, and man’s relation to it, is always close at hand.

The work is on view through May 18th. 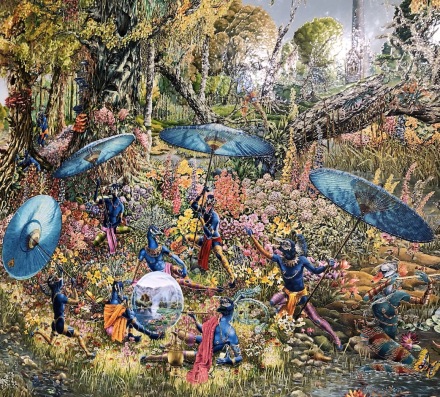 This entry was posted on Thursday, April 25th, 2019 at 2:24 pm and is filed under Art News, Featured Post, Show. You can follow any responses to this entry through the RSS 2.0 feed. You can leave a response, or trackback from your own site.