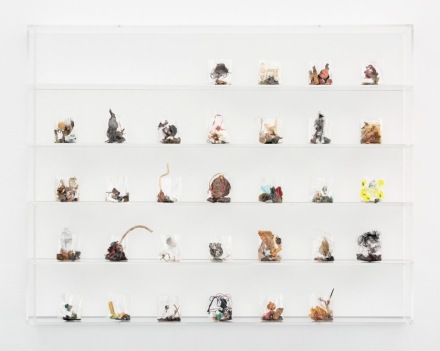 Currently on view at Miguel Abreu, Japanese-born, Brooklyn-based artist Yuji Agematsu has brought forth a diverse and expressive body of works to the galleries’ 88 Eldridge space, a selection of works delving into notions of urban space and the dense material fusions that it is capable of producing. Connecting the various processes and movements of the New York City streets into a productive engine of its own, the Agematsu’s work chains together disparate spaces and perceptions of reality. 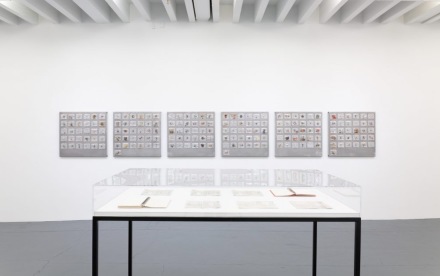 For over thirty years, Agematsu has walked the city’s streets daily with his attentions acutely turned to the mundane and the overlooked, to the detritus of urban life. First embraced as a way of attuning himself to the movements and the pace of the American metropolis, the artist’s work has slowly found itself informed by the slight details and pieces of the world around him, the markers of movement and change: old food, dropped coins, small bits of thread, all worked into masses of material through errant kicks or jostling bodies. 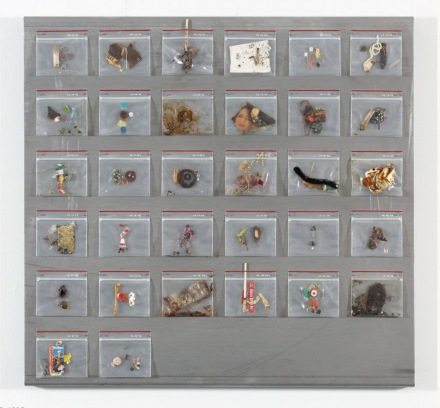 What began as a simple gesture of acculturation, immersing himself in the very materials and infrastructure of a foreign city, has developed over decades into a unique form of realism. Instead of an identity cut through by the pervasive contemporary forces of mediation, differentiation, and alienation, Agematsu has discovered a knowledge of the local—of the reciprocity of the particular and the communal—that evinces the vital interconnectivity of person and place through our regular processes of waste and regeneration. The artist’s products and pieces aren’t so much about change or decay, however, eluding those easy interpretations in favor of a fluid and hyper-aware notion of the ways in which those processes ultimately collaborate with the various cultural and spiritual forces of the human body, and the human mind. 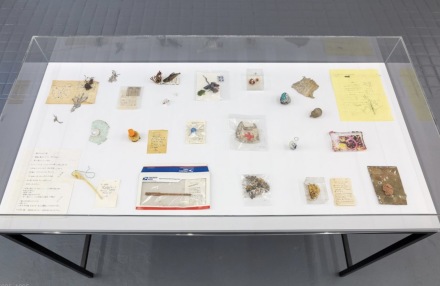 This most recent show almost a decade of the artist’s evolution and the increasingly nuanced aspects of his practice. Showing the emergence of his widely recognizable zips, daily sculptures contained in cigarette box cellophane wrappers and displayed in monthly configurations, a sort of calendar of encounters that that explore the artist’s movements and personal aesthetic leanings as a marker of time itself. The 1995 ziplocs operate in a different mode of observation than the subsequent 2003 zips, a point that traces Agematsu’s own changing awareness, and equally the shifting relationship he has to his city, nearly 10 years apart. Held tightly within the ziploc’s plastic sleeve, these almost clinical stagings appear like examination slides or even investigative evidence. They express a peculiar material distance, not so much the ecological relation of artist and object in Agematsu’s more recent work, but more a opaque sensation, one of altered time and movement within the artist’s mind, and the collected memories of the paths he walks every day. 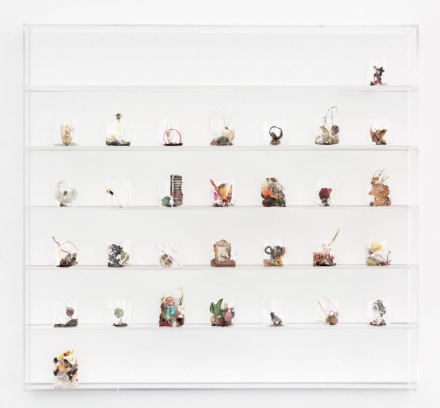 The show also presents a unique series of freeform notebook and single-sheet drawings. In 2003, due to a tenancy dispute in his midtown apartment building, Agematsu lived for the year rent-free, providing him with an unprecedented amount of time to commit to art-making. In-between his ritual walks, he produced a diverse range of drawings as a way of documenting the phenomenal impressions of his wandering. Using found objects and patterns in the artist’s counted steps as initial coordinates for an abstract spatialization, The actions of time and space cohere to create a network of time and space within their own right, a constellation of bits and pieces that trace the artist’s life in miniature.

This entry was posted on Friday, June 21st, 2019 at 2:45 pm and is filed under Art News, Featured Post, Show. You can follow any responses to this entry through the RSS 2.0 feed. You can leave a response, or trackback from your own site.