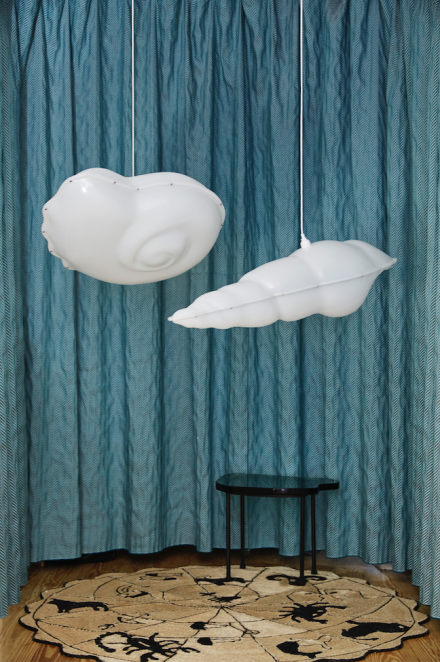 Currently on view for the week at 109 Thompson Street is the pop-up exhibition ‘Conversation Piece: Design is Dead’, a shoebox of a gallery space that designer Adam Charlap Hyman has dramatically transformed into an underwater grotto. The eponymous title of the show is the frequent tagline of Enzo Mari, a maverick Italian designer highly critical of modern design with a host of catechisms to prove it. He attributes the solipsism of design—namely, its death—as ‘the overlaying of icons without any reference to history… In most cases the essence becomes a confusing mess, created without logic.’

As if responding to this charge tongue-in-cheek, the curators have taken his statement and turned it on its head, quite literally: the show seems to defy the very logic of physics. In this space, what goes up doesn’t necessarily have to come down. Charlap-Hyman’s vision is a dreamlike portrayal of magnetic pole reversal draped in turquoise jacquard. Seashell lamps designed by Hyman & Herrero with Green River Project illuminate a slouch of visitors sprawled beneath the stars. Stars, you say? Yes, under the tangle of limbs that cluster in the rear of the gallery lies an abaca rug with an astrological wheel plaited in soft shades of taupe. Strong and smooth, the durable wheel resembles a sand-drawing of constellations in the night sky. 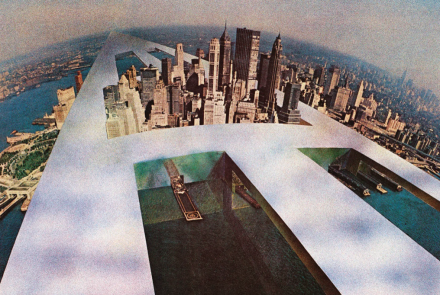 The show wittily redeems itself from becoming a pastiche of Mari’s criticism in surprising, synchronous ways. Far from a ‘confusing mess’, the space is replete with layers upon layers of referential moments. To foreground the conversation around Mari’s mid-century radicalism, Charlap-Hyman chose a purely theoretical drawing from an equally contemptuous Italian design group known as Superstudio. A sprawling architectural shell clings onto the city of Manhattan like an alnico magnet. Its luminous surface reflects the cloudy sky, offering us a retro-futuristic rendition of the aphorism “as above, so below.” Somehow, through the group’s measured precision and boundless imagination, the contradicting elements of the image fit together. 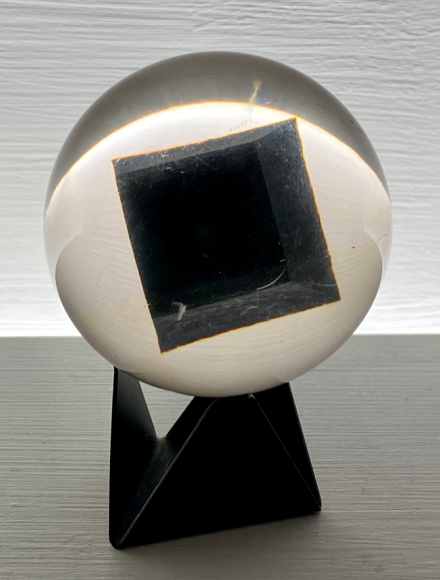 This motif of impossible constructions gains momentum in a geometric prototype by Mari. Produced in the 1960s for the Italian manufacturer Danese is a sphere in expanded resin with a black cube at its center, visibly suspended in space. The figure resembles a snow globe, yet rather than containing a picturesque vista, the globe encapsulates a barren modernist structure. This becomes a fitting counterpoint to the whimsical visions of Superstudio; thenceforth from this pairing, an unexpected dialogue of Italian design begins to emerge wherein cross-references of a more playful nature surface in this life aquatic.

As expert in Italian postwar design Giorgio Mastinu explains, Mari devised the works on display in three categories—contenir, jouer, regarder. Mastinu selected the works from his eponymous Venetian gallery and grouped them according to their ‘shape, material, function, and form.’ The first set of items, to contain, includes vases made from plastic pipes and trays from industrial high-beams. Venetian-based Yali Glass (Marie-Rose Kahane) responds to these with a vase made from two pieces of Murano glass (blown separately then deftly welded into one) and a series of stackable Moribana trays in glass and wood, respectively. 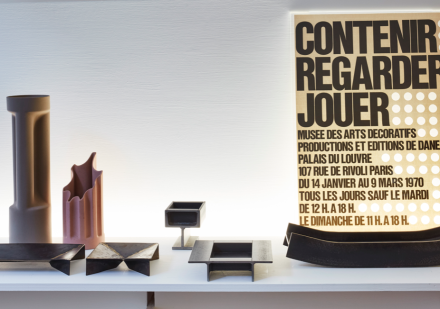 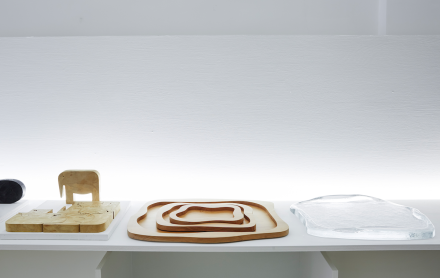 The second set, to play, provides fertile ground for the show’s dialogue of forms. In Sedici Animali (16 Animals), Mari devises a highly complex network of resin blocks of animal carvings in wood optic. When viewed independently, each animal appears to have been drafted with uncompromising consideration. However, when carefully pieced together, the entire zoomorphic flock transforms into a flat surface of labyrinthine lines. Textile designer Chiarastella Cattana takes up Mari’s fleet of wooden animal carvings with a series of jacquard Rubelli silk cushions woven in the Dolomites. Charlap Hyman and his design partner Andre Herrero (Charlap Hyman & Herrero) similarly nod to Mari’s silhouetted bestialities with their zodiac abaca rug. 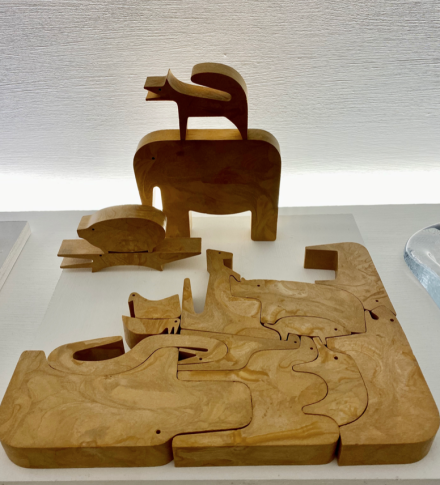 The third category, to look, features objects that explore the purely aesthetic principles of design. As Mari explained in an interview, ‘The market for “design” survives on formalism, [of which] there are two kinds: that which is acknowledged and declared, and that which derives from total ignorance.’ A declaratory show such as this, Design is Dead goes through iterations of feedback loops in which the formal concerns of postwar predecessors are revitalized, more timely than ever before. The plight of Venice, as sea levels rise and l’acqua alta threatens to transmogrify even the remotest piazzas of the city, proves Charlap Hyman’s catchphrase anywhere can become be a grotto, only this time with a weighted urgency.

On a collective level, the regarder series does well to remind us that by simply paying attention to the visual properties of design we come to understand what Mari meant when he said in an interview, ‘Form is everything. It is form that leads me to investigate, and understand, ideological and political drives.’ So as seashells float above the sandy stars, what seemed at first dreamlike appears markedly more prescient, even calculated, in the face of climate change. The works are ‘overlaid’ with references, to be sure, but every element is placed in earnest. The conversation piece questions the place of design in our changing world—past, present, and future—and proves that far from being dead, Mari’s message for designers is as alive and compelling as ever: ‘When the quality of form emerges, it goes straight to your heart. It has no need for justification.’

This entry was posted on Saturday, November 16th, 2019 at 4:57 pm and is filed under Art News, Featured Post, Go See, Show. You can follow any responses to this entry through the RSS 2.0 feed. You can leave a response, or trackback from your own site.