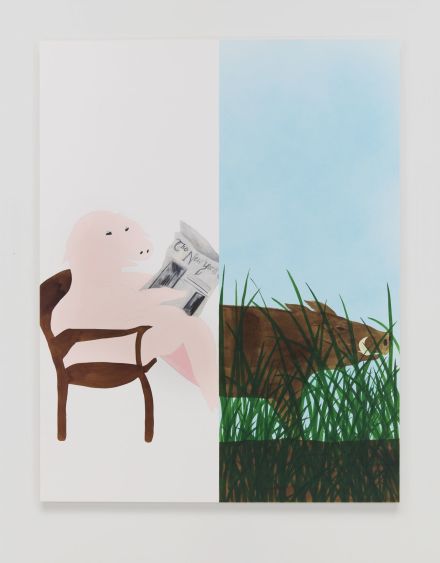 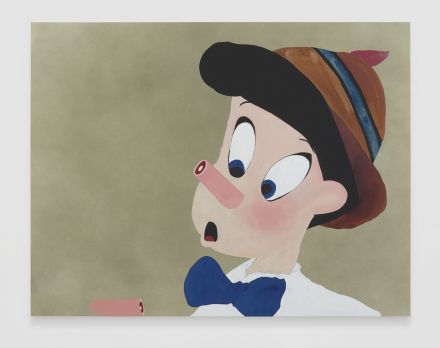 Unexpected shifts in scale, and the uncanniness these shifts engender, are a feature throughout Marcus’s practice and a pronounced theme for the show, relying on his paintings to reference small-scale images and scenes, as if composed as small watercolors or studies, then blown up to massive size. Whether a filmic depiction of a greyhound chasing a rabbit or a cartoonish rendering of a mortal forearm contorting to shake hands with the divine, these objects balance, with heady precariousness, the washy immediacy and insouciance of a hobbyist’s sketches with the incisive line, poised composition, and physical and psychological gravity of serious painting. There are inflections of Jim Shaw’s mortifying humor, and subtle inflections of Jonas Wood’s loose figuration, all orchestrated with a strange combination of stylistic tropes that mark Marcus’s paintings as his own. 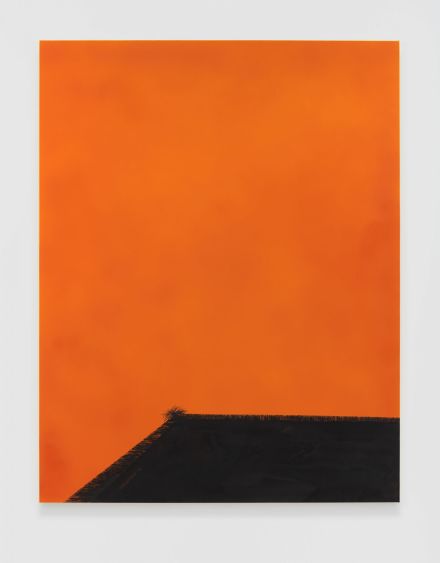 These singular representations share a sensibility, at once idiosyncratic and disarming, that immediately draws the viewer into the mysteries of the world of modernity. Seemingly open and accessible, their internal logic grows increasingly confounding, and increasingly bizarre with repeated reads, and while they remain recongizable in some ways, using familiar characters and scenes, the paintings also underscore a sort of anxious subjectivity, denying the simple readings they seem to proffer. They also refuse to settle into any one genre or even medium. 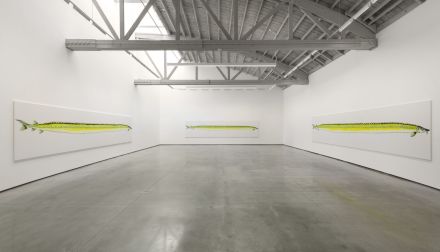 This perhaps reaches its fever pitch with his “Stretch Sturgeon” works, a series of five-by-twenty-two-foot canvases painted in watercolor washes of yellow and green to depict impossibly long fish. Recalling both naturalists’ field guide illustrations and the folk-art tradition of fishermen recording their haul, each painting also functions as surrogate human portraiture, as a trophy representing the angler who made this proverbial catch of a lifetime. 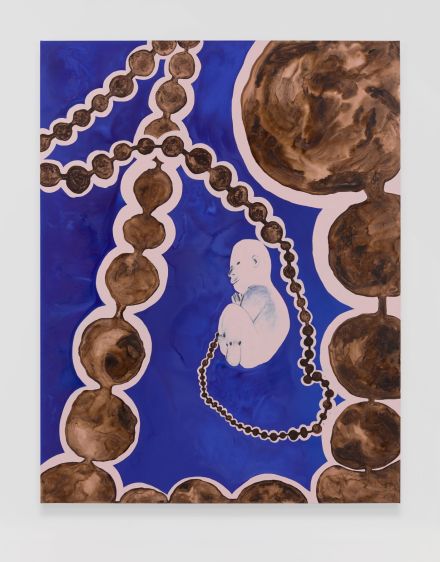 As in much of his production, in GO HANG A SALAMI IM A LASAGNA HOG Marcus translates the vagaries of an interior, personal world into images and objects notable for their clarity and directness. By amplifying the peculiarities of his own vision and processes, he channels the contradictions of contemporary life. Through this, Marcus demonstrates how familiar and unfamiliar, large and small, and heroic and ordinary are no longer oppositional categories, but unified experiences.

This entry was posted on Friday, January 3rd, 2020 at 12:47 pm and is filed under Art News, Featured Post, Show. You can follow any responses to this entry through the RSS 2.0 feed. You can leave a response, or trackback from your own site.