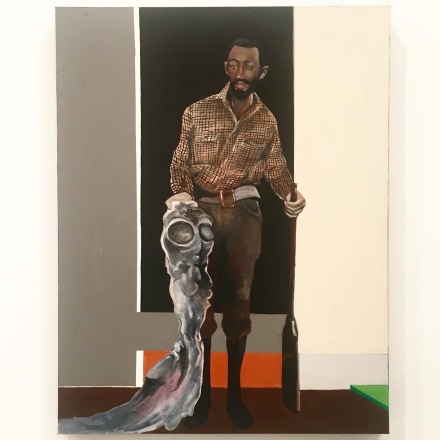 Noah Davis, Man with Alien and Shotgun (2008), all images via Art Observed

In the all-too-short run of his life as both an artist and organizer, Noah Davis was a larger than life energy.  He was a tireless advocate for black arts in Los Angeles, and a relentless energetic painter whose lush figurative style tied together signifiers and concepts from across the expanse of modern painting.  As curator and organizer at the Underground Museum, a black-owned-and-operated art space dedicated to the exhibition of museum-quality art in a culturally underserved African American and Latinx neighborhood, he was a central figure in advocating and advancing the work of his peers and predecessors, creating historical dialogues on the back of his own vision.   This energy serves as the underlying power of his current exhibition at David Zwirner in New York, where the late artist’s work is succinctly summarized and celebrated. 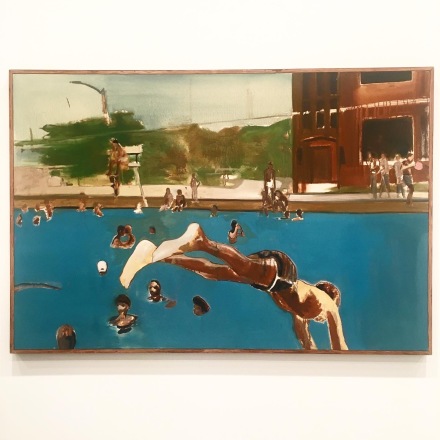 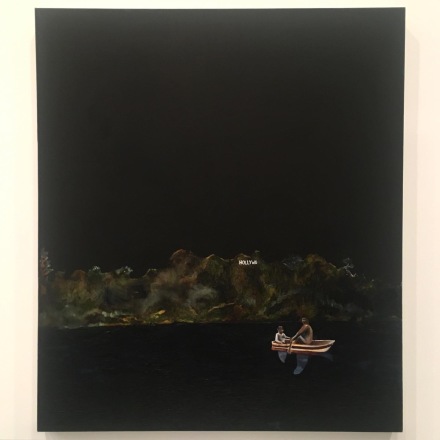 The works on view highlight both parts of Davis’s practice, featuring more than twenty of his most enduring paintings, as well as models of previous exhibitions curated by Davis at the Underground Museum.  Loneliness and tenderness suffuse his rigorously composed paintings, as do traces of his abiding interest in the last twenty years of painting and portraiture.  Hints of Luc Tuymans and Kerry James Marshall play across his work, fusions of the real and the fantastic twisting in and out of his depictions.  In some works, a backdrop of rich black serves as the space for nuanced interplays of light and space, figures in a boat gazing up at the night sky and silhouetted against the light of the moon, or flat depictions of the domestic, like one work where a woman spanks her child.  The sense of a world mired in both the immediate and the far off is a striking showcase of his unique graphical skill. 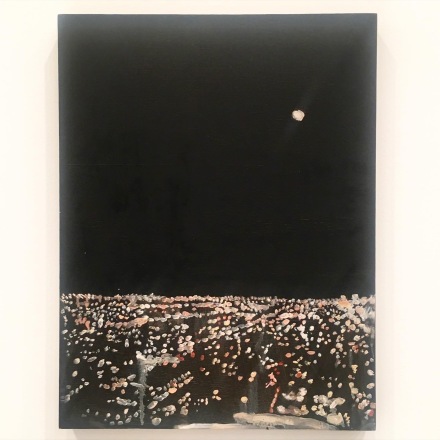 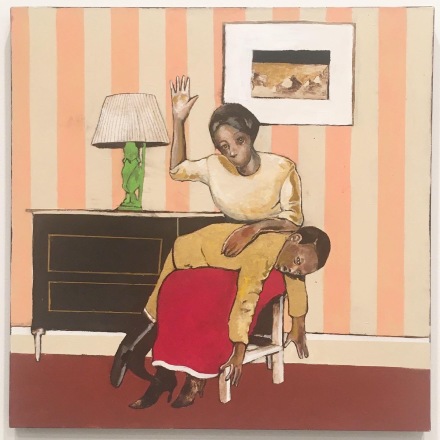 The exhibition also includes a “back room,” modeled on the working offices at the Underground Museum, featuring more paintings by Davis, as well as BLKNWS by Davis’s brother Kahlil Joseph; a sculpture by Karon Davis, the artist’s widow; and Shelby George furniture, designed by Davis’s mother Faith Childs-Davis.  Davis’s dream was to exhibit “museum-quality” art in a working-class black and Latino neighborhood. In the early days of the UM Davis was unable to secure museum loans, so he organized exhibitions of his work, alongside that of his friends and family, and word of mouth spread about Davis’s unique curatorial gestures. In 2014 the UM entered into a partnership with the Museum of Contemporary Art (MOCA), Los Angeles and Davis began organizing exhibitions using MOCA’s collection as his starting point. In the aftermath of Davis’s passing the team of family and friends he gathered continued his work at the UM, transforming it into one of the liveliest and most important gathering places in Los Angeles for artists, filmmakers, musicians, writers, and activists.

This entry was posted on Thursday, January 30th, 2020 at 12:23 pm and is filed under Art News, Featured Post, Show. You can follow any responses to this entry through the RSS 2.0 feed. You can leave a response, or trackback from your own site.