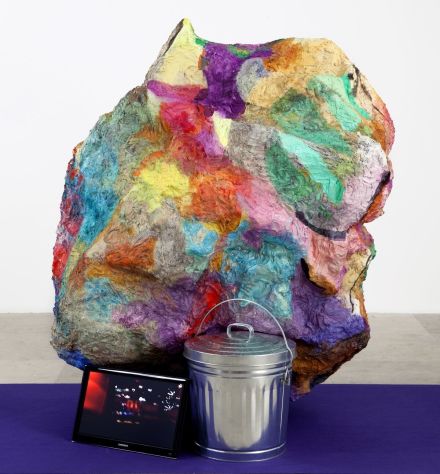 Combining sculpture, readymades, drawing and a playful conceptual bent, artist Rachel Harrison’s work over the past 30 years has challenged easy readings of consumption, commercialism and modernity, imbuing her lumpy, peculiar objects with a sense of wry humor and situational irony.  Opening a major retrospective at The Whitney this winter, the artist’s work gets ample room to breathe, to striking result. 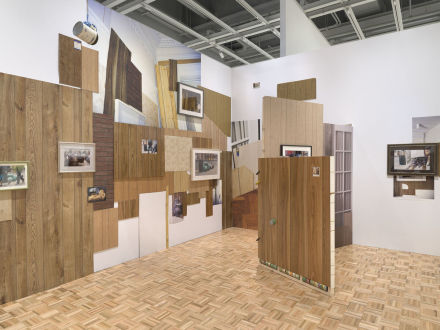 Rachel Harrison,Rachel Harrison Life Hack (Whitney Museum of American Art, New York, October 25, 2019–January 12, 2020). Should home windows or shutters be required to withstand a direct hit from an eight-foot-long two-by-four shot from a cannon at 34 miles an hour, without creating a hole big enough to let through a three-inch sphere? (1996/2019) via the Whitney

Harrison’s complex works—in which readymades collude with invented forms—bring together the breadth of art history, the impurities of politics, and the artifacts of pop and celebrity culture. The exhibition, titled Life Hack, includes approximately one hundred works spanning the early 1990s to the present, drawn from private and public collections throughout the world.  From her early works, which combined a certain performative flair with enigmatic interrogations of commercial and domestic sites, to her immense sculptures, to her surreal drawings of Amy Winehouse, Harrison’s works mine the language of the commodity and its functioning in the network of modern culture. 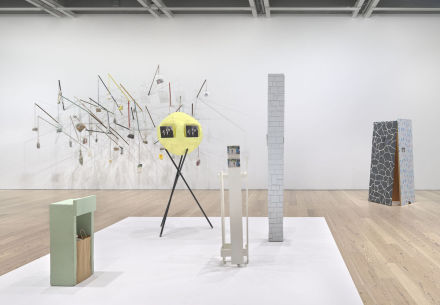 Harrison’s works perform these functions in a number of ways. There’s massive clouds of assembled material, like poles jammed into a wall, to her surreal environmental installation, Should home windows or shutters be required to withstand a direct hit from an eight-foot-long two-by-four shot from a cannon at 34 miles an hour, without creating a hole big enough to let through a three-inch sphere?, a piece that creates a fragmented domestic living space that echoes a video piece just outside the exhibition, showing said pole rocketing over and over into a piece of drywall.  In each, force and language contend on the surface of her works, always driving at the tensions and meanings lurking beneath the surface of the works that confound and refract these same operations. 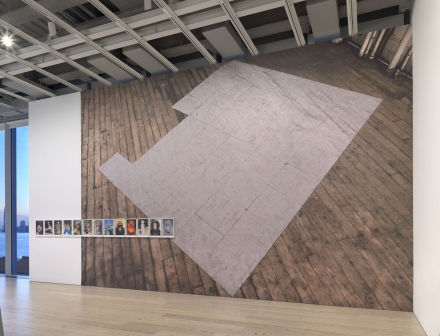 This is perhaps best summarized in a series of smaller works, imaginative drawings of the late Amy Winehouse posed amongst classic works of contemporary art, often presented in the same style as the original piece.  Showcasing the exchangeability of meanings between “high” and “low” culture, or perhaps the meaninglessness of these distinctions in a modern discourse, Harrison’s works seem startlingly prescient regarding the modern phenomena of social media fame, forecasting a world in which the images of these contemporary masters both share online real estate with, and serve as backdrops for, the contemporary celebrity body. 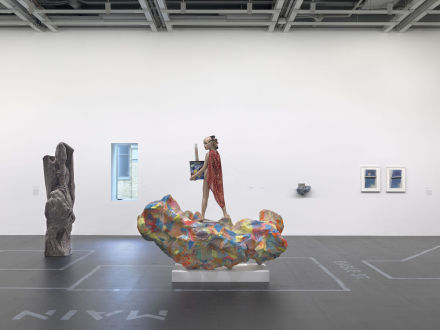 The body itself is always present in Harrison’s works, even in moments of the most bizarre abstraction.  In one work, for instance, 20 × 24″ (for CDL), she poses a grainy photo of a man gazing at the iconic Origin of the World by Gustave Courbet, hiding this photo in a niche of the work, and painting over the front of the work with the text “$50.00 Bet.”  The result is a peculiar transposition of value and image, of the body and its suspension in a broader field of meanings.  The act of extraction, whether of meaning or economic value, is the job of the viewer.

The artist’s work is on view through January 12th.

This entry was posted on Thursday, January 9th, 2020 at 12:19 pm and is filed under Art News, Featured Post, Show. You can follow any responses to this entry through the RSS 2.0 feed. You can leave a response, or trackback from your own site.