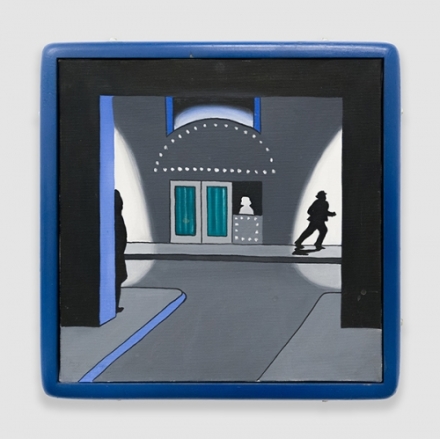 Counted among the ranks of the Chicago Imagists, Roger Brown possessed a unique sense of figuration and composition. Celebrated for their use of imagery, figuration, narrative, and patterning, this group of artists pulled from idiosyncratic sources to produce deeply personal and visually diverse work, shirking the cool, stylistic orthodoxies that dominated on the coasts in favor of a fluid, colorful style that mixed together disparate styles and techniques. 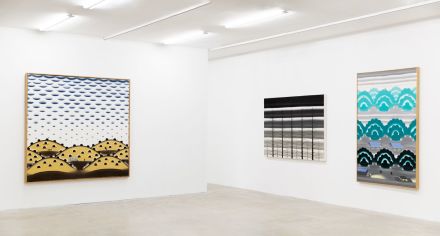 A longtime resident of Chicago, Brown’s work sits among the more intriguing of this school, utilizing interior frames and borders, cartoonish constructions of metaphorical scenes and symbols, and an always playful sense of space and form that makes his work immediately appealing. Currently the subject of a show at Venus Over Manhattan, the artist’s work gets its due attention this month, compiling a selection of pieces that underscore the range of his practice before his death in 1997. 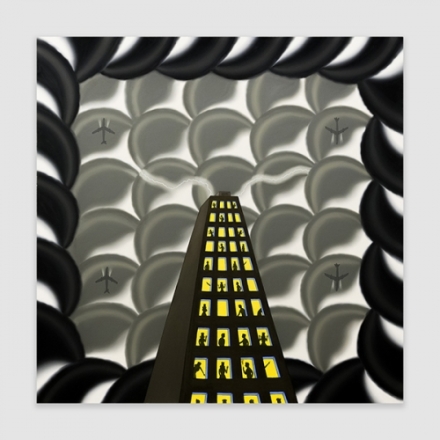 Roger Brown, Hole in the Sky (with Nervous Travelers) (1978), via Venus Over Manhattan

The works on view here present a unique approach to the construction of the canvas. Effortless and smooth in the depiction of various scenes, his pieces deploy cinematic constructions and deliberate tensions of space to masterful effect. In one piece, a large truck tailgates a tiny car, the alarming proximity lent even more tension by the domination of the frame by the scene. There is little else to focus on, and the shadowy clouds behind the automobiles make for a dark, forbidding atmosphere, despite the scene’s clear sense of energy and flow. 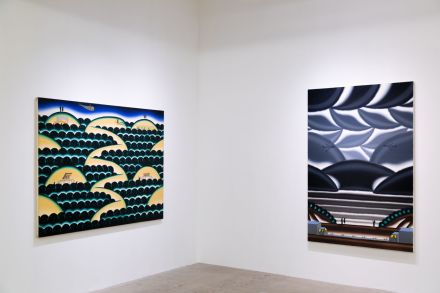 What’s particularly striking in Brown’s work is the breadth of his output, and its seeming graphical unity. Works from 1976 stand in clear, crisp comparison to more recent compositions, a note that underscores his impressive focus and skill in rendering landscapes, bodies, and architecture in a unified conceptual worldview. While his focus moved across a wide range of subjects over his 30+ year career, his works present as an eye moving across a landscape, pausing to focus on buildings or human forms, highways or public spaces, all rendered in a strikingly similar hand. The result is a portrait of the American landscape notable not only for its incorporation of so many perspectives, but for the way they fit together, interlocking into a grand schema that twists and winds its way towards the horizon line, much like the roads and highways depicted in so many of his works.

This entry was posted on Thursday, January 2nd, 2020 at 1:11 pm and is filed under Art News, Featured Post, News, Show. You can follow any responses to this entry through the RSS 2.0 feed. You can leave a response, or trackback from your own site.