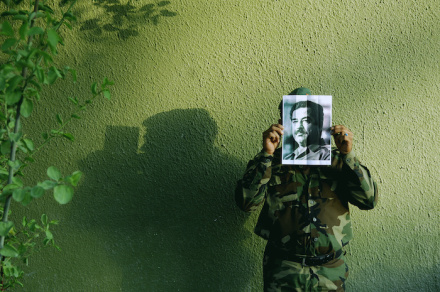 Military engagement in Iraq over the last 30 years has had a unprecedented impact on contemporary culture and society, with American intervention  in the Gulf and Iraq Wars opening a debate on American values and beliefs, in turn influencing the work of artists around the world. Exploring this concept MoMA PS1 presents Theater of Operations: The Gulf Wars 1991-2011, a large-scale group exhibition analyzing the legacy of the U.S. military presence in the region. The exhibition spans four floors, including more than 250 works featuring over 80 artists and collectives, including thirty-six Iraqis and Kuwaitis.

The theme of the Gulf Wars legacy has considerable crossover with other cultural changes of the last two decades; including the 24-hour news cycle, the internet and new media technologies. The changes in society are reflected in the variety of mediums: the exhibition heavily relies on digital art, assemblage, installations, video art, as well as conventional pieces. The combination of such a wide range of works gives the audience a grasp of the influence of these wars on artists all over the world. The choice of exploring the effects of these happenings on artists based in Iraq and its diasporas alongside with the responses to the war from the West creates a stimulating dialogue, engaging with the public on a deep level. 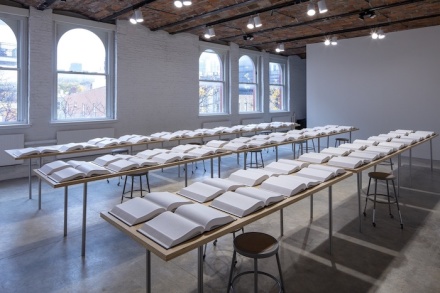 The destabilization of the Middle East is explored through videos and images containing graphic content, as well as canvas and drawings using violent and vibrant colors. News articles, interviews, reportages and magazine pieces are spread throughout, both repurposed and reinvented, or drawn directly from the era. It was among the first conflicts reported live, with mainstream and independent media covering all happenings on the other side of the world. Society was overwhelmed with the volume and speed of information, unaware of what to do with it. This sensation is perfectly pictured by Rachel Khedoori in her powerful Untitled (Iraq Book Project) (2008-10): a room filled with seventy large books with printed on every article found online from March 2003 containing the word Iraq, Iraqi or Baghdad.   The glut of information mimics the effect of coverage, both overwhelming in scale and seemingly assuring in its offering of some context. 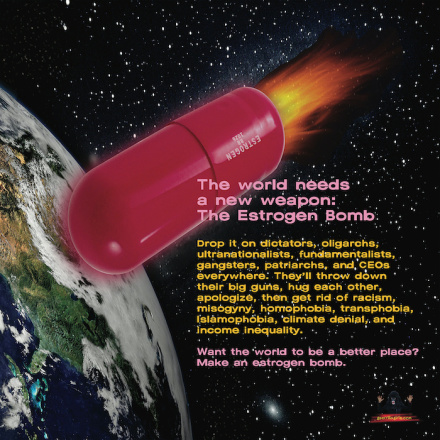 Tony Coke, in his video installation Evil.16 (Torture.Musik) (2009-2011), refuses to show torture images and projects text on screen, with the soundtrack of heavy metal, Britney Spears and Nancy Sinatra. When approaching the room where the video installation is set, the visitor hears familiar upbeat tunes, unaware of the role they played in Abu Ghraib prison. Once faced with the screen, a white text on a beaming red and blue background informs that exposing prisoners to loud American hits on loop was a technique used in Abu Ghraib. Dia al-Azzawi depicts violence with a black and white Guernica-like mural, employing blood red as the only color, in his Mission of Destruction. In his series Saddam is Here (2010), Jamal Panjweny uses a paper image of Saddam Hussein to cover the faces of Iraqi soldiers, butchers, children playing in the streets and doctors. In the Guerrilla Girls’ The Estrogen Bomb (2003-2017), the artists suggest sending estrogen pills to presidents, prime ministers, generals and oligarchs, implying the world’s need for a new weapon, or perhaps some feminine perspective. 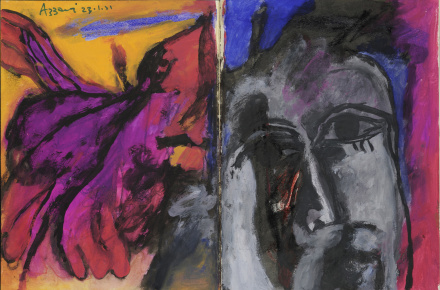 The exhibition is a combination of irreverent and incisive works, including a wide range of perspectives from artists coming from all kinds of backgrounds. With the recent involvement of the US military in the killing of the Isis leader Abu Bakr al-Baghdadi, and US troops being deployed in eastern Syria, Theater of Operations is timely and topical. It invites us to open a dialogue on a topic not often addressed culturally, this time including Iraqi cultural production in the conversation.

The exhibition closes on March 1st.

This entry was posted on Thursday, January 30th, 2020 at 4:00 pm and is filed under Art News, Featured Post, Show. You can follow any responses to this entry through the RSS 2.0 feed. You can leave a response, or trackback from your own site.