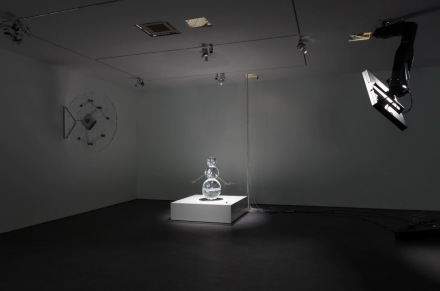 Marking his eighth solo show with Berlin’s Esther Schipper, artist Philippe Parreno‘s Manifestations spans the full range of his artistic output, running through a selection of pieces that include a granular soundtrack, a CGI film, atmospheric sensors, robotic systems, computer code, ice and water.  In typical fashion for the artist, the show is billed as an effort to “connect ‘things’ that, a priori, had nothing to do with one another; ‘thing’ that allow themselves to be summoned by repetitions, synchronicities, signals, or singularities.” 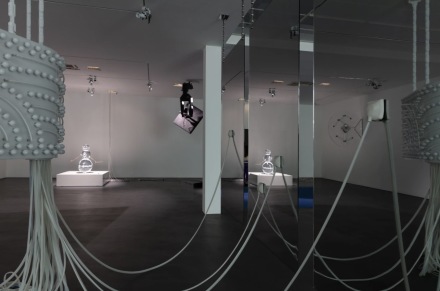 These works are perhaps best described as a series of environment stimulus systems, responding in various sequences that turn the exhibition into a subtly unified environment.  Parreno creates events that respond to unfinished existences, lesser existences that need to be amplified and made more real. Manifestations of devices such as these, whether a sound, an object, a situation or a landscape allows each to a reflection and amplification of reality in equal measure, a sort of reconstructive feedback system that builds on and reshapes perception and understanding. 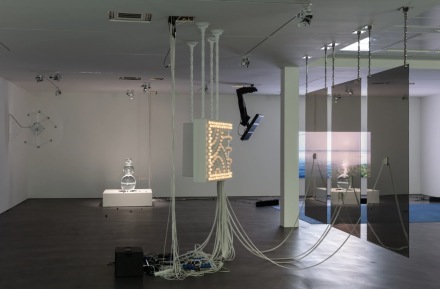 Each of the works, accordingly, alternates between presence and absence, appearance and disappearance, flickers of material and immaterial elements that build into a complex body of its own right.  The show sees Parreno transforming his exhibition into a system of interlocked poetics, an exhibition producing itself by the collective movement and space it produces each moment that the show is “on.”  Even the gallery website is part of the network, broadcasting the interior gallery noise as a flickering series of cycle hums. This assemblage of objects constitutes an automaton that manifests itself in unpredictable ways. In the gallery Marquee in the center of the room both “sees” its surroundings and its own reflection in the mirror, producing a strange, disembodied sense of persona, the same sense that haunts the gallery at large. By contrast, The Owl in Daylight (2020), a new film, is a CGI sequence of a landscape. It is an animated film without events, nothing happens, only time. Atmospheric sensors placed in the exhibition space create light changes within the image itself. The diegetic reality of the film hesitates, stutters and stabilizes at given moments throughout its sequence.

Throughout, Parreno dwells on space as a possibility, where new modes of being might exist, even in the most minute of electronic hums. 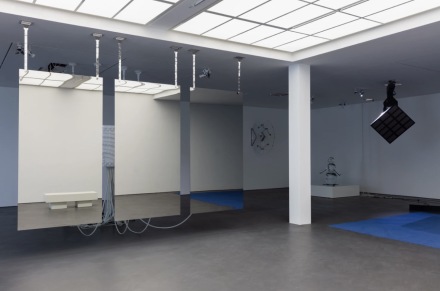 This entry was posted on Friday, October 16th, 2020 at 12:21 pm and is filed under Art News, Featured Post, Show. You can follow any responses to this entry through the RSS 2.0 feed. You can leave a response, or trackback from your own site.