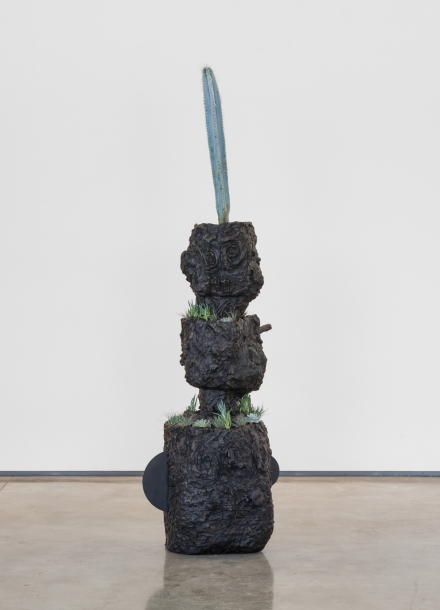 On view in Los Angeles this month, artist Rashid Johnson has brought forth a selection of new works at David Kordansky that continue his exploration of a wide range of media and formats. The show, which includes new paintings, bronze sculptures, works on paper, and the debut of a new 35mm film will occupy all three of the gallery’s exhibition spaces. 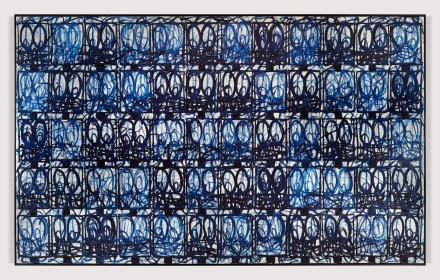 Since the beginning of his career, Johnson has pursued formal innovation in a diverse range of mediums while simultaneously honing a sophisticated and deeply personal vision on a variety of themes such as his autobiography, social history, philosophy, and art history, unifying his work under an existential inquiry into his life and the broader themes that addressing personal experience give rise to. This concept sees him following his inquiry through the aforementioned scope of media that his work touches on, including his new Bruise Paintings, a further development of themes present in his Anxious Red Paintings, and which fill the Gallery’s northern exhibition space. Rendered in deep blue oil paint; the color is spread and layered across the oil-coated linen surfaces so that it takes on a range of blues, from light blue to almost black. The paintings conjure the feelings of aftermath, reckoning, and healing, with half-geometric, half-human faces arranged in expressive, viscous fields of line and color. 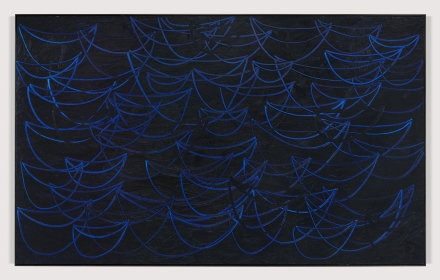 Rashid Johnson, Seascape “The Devil and the Deep Blue Sea” (2021), via David Kordansky

By contrast, the southern gallery presents a selection of new Bronze works, totemic shapes that resemble characters from Johnson’s paintings, and which serve as planters to nurture life. Frenetic in execution and filled with a tense energy, the works negotiate between a fervent energy and a more subtle, leisurely undercurrent, underscored by a range of materials like records and oyster shells that seem to negotiate and challenge easy reading of the work. 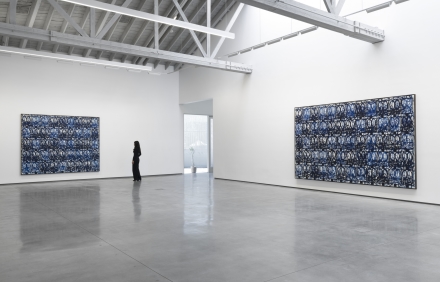 The contrast between the existential and the mundane is a driving force in the new film on view, also titled Black and Blue, projected in the West Gallery. Shot on 35mm film, Black and Blue depicts the movements of the protagonist—played by Johnson himself—as he navigates his daily routine. Eating, driving, exercising, spending time with family, and sleeping make up a life, and yet they are precisely the activities that get overlooked when epochal shifts are analyzed and commemorated. The film is suffused with claustrophobia and isolation, though what is being witnessed has a complete lack of conflict or tragedy. Woven throughout the film are sounds and images that reveal their close connection to Johnson’s other works, both the new work in the current exhibition and from throughout his career. Photography books, novels, African sculptures, oyster shells, and branded wood—which have all appeared in the artist’s oeuvre—are incorporated into the film, either in the character’s environment or in brief flashes that move with the intuitive fluidity of thoughts and dreams. But so do atmospheric passages that are—like many of the guiding spirits in his project—abstract, open-ended, and evocative of natural worlds as much as cultural ones.

This entry was posted on Wednesday, September 29th, 2021 at 2:44 pm and is filed under Art News, Featured Post, Show. You can follow any responses to this entry through the RSS 2.0 feed. You can leave a response, or trackback from your own site.