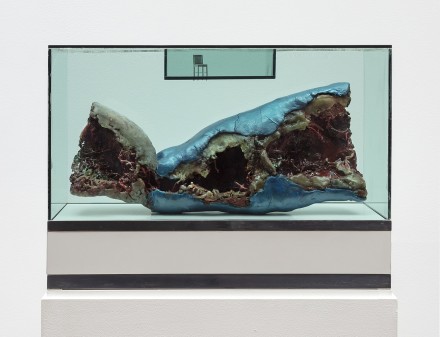 Offering a rare opportunity to view a series of resonant historical works by artist Paul Thek, Alexander and Bonin is currently presenting a selection of works by the artist that span a range of pieces from the 1960’s into the later years of his career. Exploring the artist’s evolving aesthetic concerns and range of media and techniques, the show presents Thek’s work in relation to changing societal contexts and political situations. 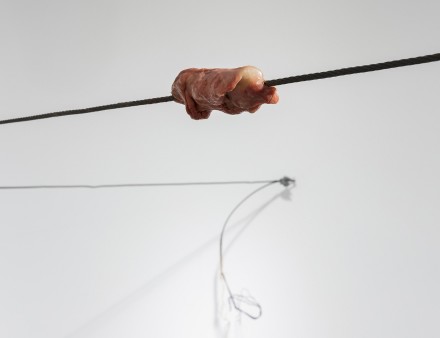 Beginning with Untitled (Meat Piece with Chair), 1966, from the iconic series Technological Reliquarieson through a range of works including “picture light” paintings and newspaper paintings from the 1980s, the show culls together a rarely seen selection of Thek’s often challenging, provocative practice. His earliest work on view, Untitled (Meat Piece with Chair) (1966), is perhaps the most explicit demonstration of this mode of work, a swollen, distended piece in wax, bronze and formica that plays on uneasy sensations of decay and the passage of time, pulling these elements into a conversation with the often clinical language of surrealism and early post-modernism. Centering the body in his works, Thek took the prompts of his European forebears, and turned it towards a rooted, embodied series of gestures. The work is simultaneously fragile and imposing, its unsteady alchemy causing a sense of sudden surprise, or perhaps revultion in the viewer. 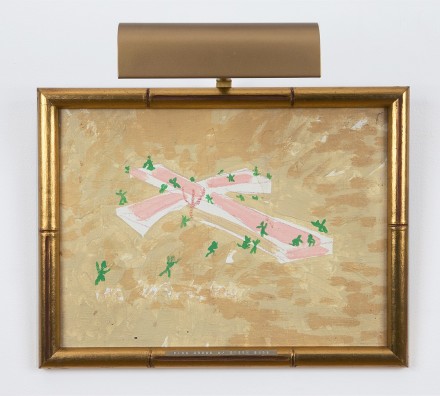 His later work from that decade would further this practice. Following time in New York, Thek spent much of the late 60’s and 70’s in Europe – Rome, Sicily, and the first of many summers on the Italian island of Ponza, where he intermittently lived and worked for over a decade, and where he made a series of works like his “meat cables”: sculptures composed of steel cable (20–40 feet, 6–12 meters long) onto which he formed chunks of wax “meat.” The works suspend that same sense of body awareness into three-dimensional space, drawing on a more intentional encounter with human viewers as they pass through the space. 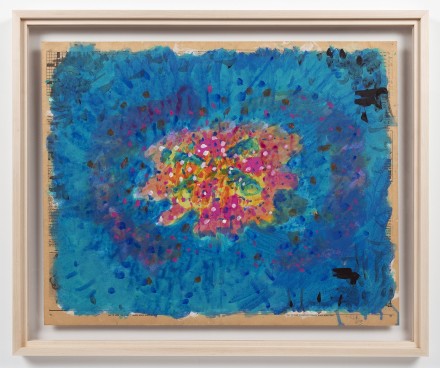 The show goes on to explore a range of later drawings as well, pulling from the artists’ journals and sketchbooks, as well as the works that seem to spring from the artist’s loose approach to figuration. Pink Cross with Green Buds (1975-1980), for instance, suspends a painting within its own lit frame, referencing Christian lecterns and the attendant imagery within the frame in close conversation. Later works that this loose, painterly style further, presenting the artist’s work in an open, fluctuating dialogue with a broad range of artistic contemporaries.

The show is on view through October 29th.

This entry was posted on Tuesday, October 26th, 2021 at 12:30 pm and is filed under Art News, Featured Post, Show. You can follow any responses to this entry through the RSS 2.0 feed. You can leave a response, or trackback from your own site.