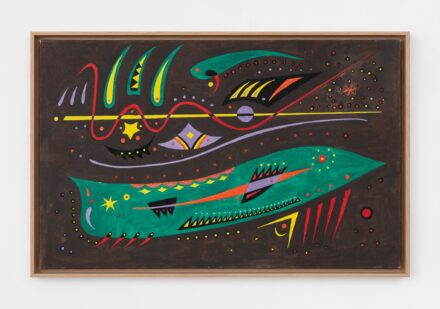 On view this month at two of Galerie Perrotin’s Paris exhibition spaces, artist Yves Laloy’s work gets an expansive and exploratory review, marking the first major exhibition since a 2004 retrospective at the Musée des Beaux-Arts in Rennes. Unifying a series of private loans for the show, the exhibition marks an unprecendented look at the architect-turned-painter and his kinetic, colorful painterly constructions. 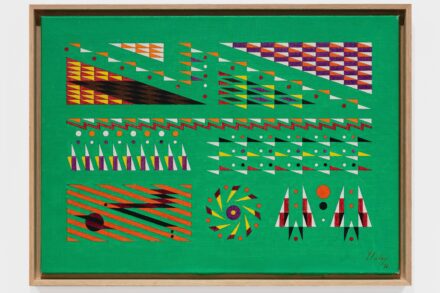 Laloy’s training as an architect had a great influence on his technique. Even before using paints and brushes, the artist traced the slightest shape and outline of his compositions with a pencil directly on the canvas laid flat, using a T-square and with the help of rulers, compasses and triangles. Then, mechanically, he applied a light and precise pictorial layer, often without modeling and shadows. The color palette is highly vivid, a play on contrasts and often an expression of violence or passion. The works on view here underscore his meticulous and structural appreciation of how space could be constructed. Works exude a range of structural and formal vocabularies, moving from gyrating, cartoonish bodies to carefully assembled grids of gestures and patterns.

The artist, who was was particularly influenced by non-Western art, especially that of the Navajo in America, takes these forms and allows them to move into new assemblages, somewhere between free association and a tightly internalized logic. Moving through the artist’s various explorations, the show takes this interest in the image as both a space of careful construction and free-roving imagination as central point, selecting works the showcase an artist both creating his own rules on the construction of his works, then casting those same rules asunder when it suits him.

On view through March 12th, the show is a rare opportunity for such a comprehensive and wide-ranging exploration of the artist’s work. 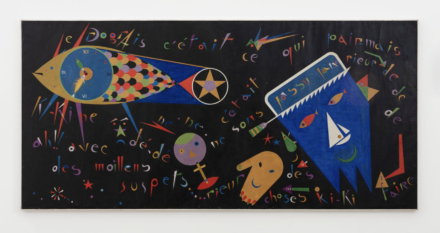 This entry was posted on Tuesday, January 18th, 2022 at 12:00 pm and is filed under AO On Site, Art News, Featured Post. You can follow any responses to this entry through the RSS 2.0 feed. You can leave a response, or trackback from your own site.