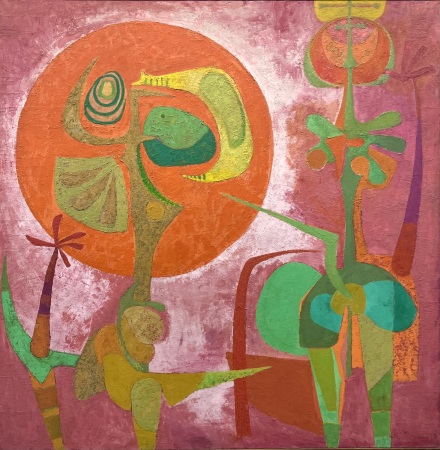 The post-pandemic edition of ZonaMACO, the largest art fair in Latin America, came back this year with a revitalized and vibrant energy. Its location, Mexico City, has become a focal point in the art world and a haven for artists looking for creative possibilities. The Art Week brought together a dynamic assortment of art world insiders—emerging galleries and established cultural institutions, young artists and designers, and the usual cool kids on the scene. Surrounding the fair, the satellite events were bursting with activity, from gallery and museum openings to performances and parties, and the classic lunches at Contramar.

The fair presented a carefully-curated selection of galleries, a newly-designed and highly interactive book section, as well as adjacent sections on design, decorative works, and antiques. Kurimanzutto gallery presented a diverse body of work by Mexican artists including Bárbara Sánchez-Kane, Dr. Lakra, and Miguel Calderón, as well as Abraham Cruzvillegas. At the high-gloss, fluorescent booth of The Hole, a New York City-based gallery, a selection of works by Caroline Larsen, Morgan Blair, and Johnny Niesche was on view. Another highlight was the Barn Bradenstoke gallery, where the artist Stefan Rinck exhibited his caricaturesque, neo-anthropological stone and wood sculptures across a hot-pink booth. OMR, the pioneering contemporary art gallery based in Mexico City, showed colorful, swirling and poetic compositions by Pia Camil from her intimate series Laugh Now, Cry Later. The young Monterrey gallery, Colector, was another hit with its streamlined selection of large-scale paintings and raku ceramics by Zhivago Duncan, esoteric crushed stone and crystal-pigmented paintings by Rachel Garrard, and metal sculptures by Max Frisinger. At Galería Hilario Galguera, the erotically grotesque photographs by British artist Maisie Cousins lured in fair-goers. 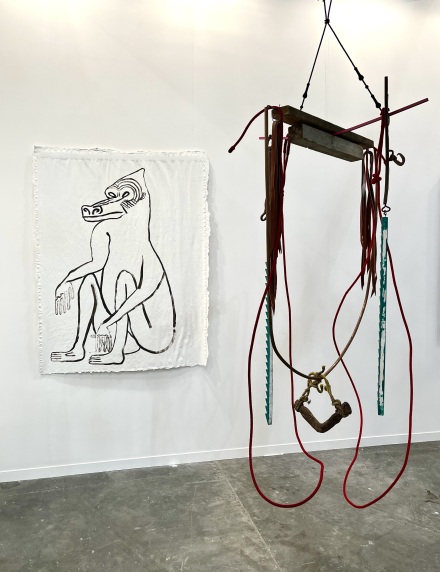 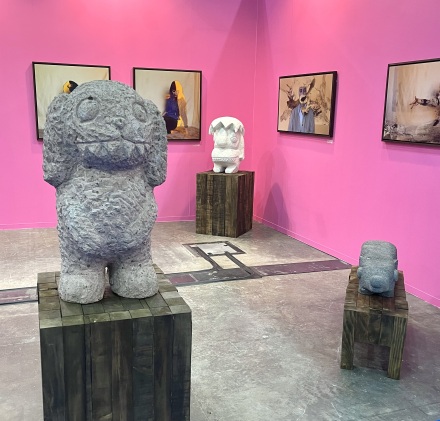 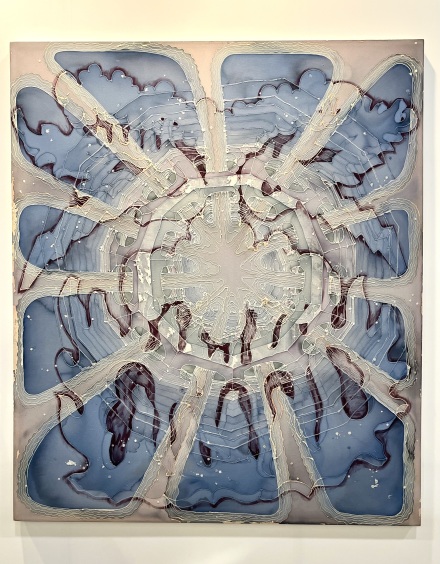 Parallel to the fair, the social calendar was buzzing with activity as galleries inaugurated exhibitions throughout the week. At House of Gaga, painter Raul Guerrero presented work from his playfully satirical series Historia y Leyendas de las Calles de Mexico (The History and Legends of the Streets of Mexico). Guerrero is a Mexican-American artist who grew up in California, and the twelve paintings comprising this series were made after his homecoming trip to Mexico City in 1994. It was a trip that resulted in a foray into the social intricacies and contrasts of this enigmatic city, as well as explorations of his own bi-national identity. One of the paintings depicts a dinner that Guerrero attended in Polanco, an upscale neighborhood in Mexico City. The scene is partly obscured by smoke out of which rises the apparition of Tina Modotti, a photographer and Communist revolutionary who spent the last decades of her life in Mexico City documenting the intellectual and artistic milieu that included Frida Kahlo and Diego Rivera. 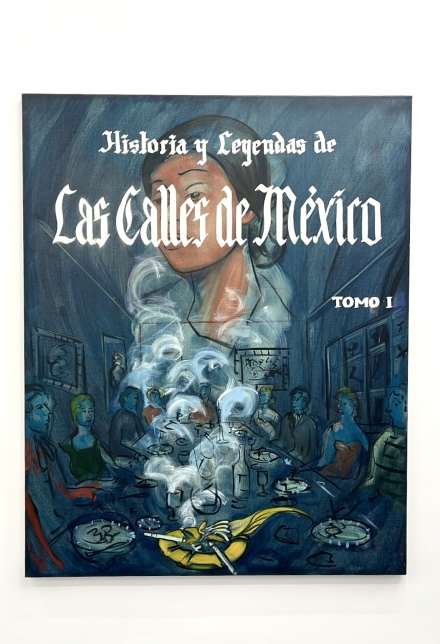 Raul Guerrero at House of Gaga

MASA, the nomadic design and art collective known for taking over architecturally-idiosyncratic spaces, returned this year with a takeover of the seventh floor of an inconspicuous office building in Roma Norte. Titled MASA Inc., the tongue-in-cheek exhibition brought together sculptural works by Hector Esrawe, Brian Thoreen, and EWE Studio, among others, into a project that challenges our conceptions of space and function, particularly in work environments. 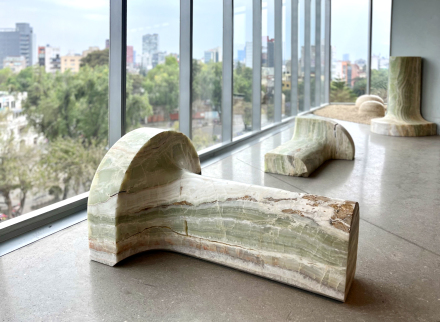 OMR Gallery opened its new cultural space LAGO/ALGO in a mid-century modernist building situated on a lake in Bosque de Chapultepec. Designed by Alfonso Ramirez Ponce in 1964, the storied space was renovated by OMR in conjunction with Naso Studio. LAGO/ALGO’s inaugural exhibition—titled Form Follows Function—conceptualizes a futurity circumscribed by the challenges of ecological degradation and the conflicts of contemporary society. In addition to forty-five works by a roster of artists represented by OMR Gallery, the show features a striking ocular light work by James Turrell. 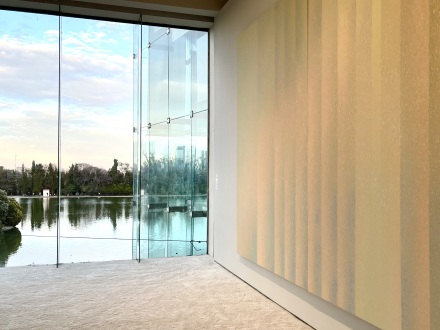 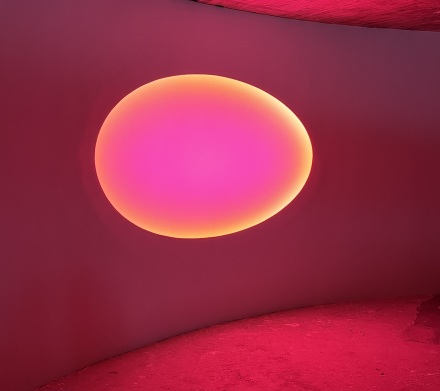 At Kurimanzutto, another Mexico City heavyweight, a show by the Portuguese sculptural artist Leonor Antunes opened on February 12th. Continuing her exploration of the work and legacy of a range of women creators over the course of the 20th Century, Antunes surveys the life and work of Léna Meyer-Bergner, an artist and textile designer that took part in the second phase of the Bauhaus in Dessau, and who resided in in Mexico from 1939 to 1947. The sculptures on view resemble a tactile obstacle course, perhaps a metaphor for the experience of female artists working in a historically patriarchal society. 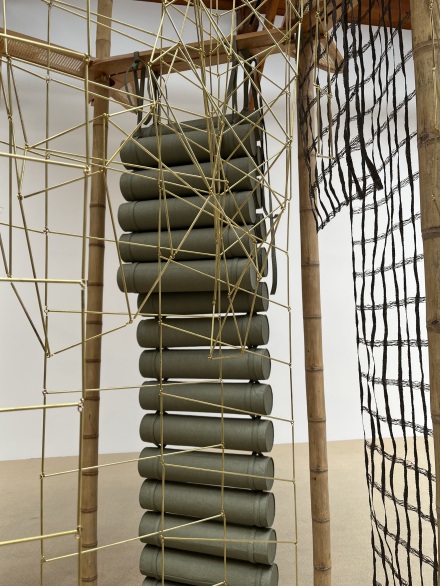 Labor, a cool contemporary art gallery in the San Miguel Chapultepec neighborhood, inaugurated an exhibition by the Mexican artist Antonio Vega Macotela, titled It is a corpse, it is dust, it is shadow, it is nothing. As part of his exploration of the digital world and conceptions of identity within post-colonial structures where race and culture are historically intermixed, Vega Macotela transforms the traditional Catholic triptych altarpieces through the inclusion of indigenous iconography. To create the altarpieces, he used the MakeHuman software to print ‘human skins’ onto the cow leather interior of the triptych, while the backside of the altarpiece depicts topographical reliefs of the six most exploited mines today, all located in Africa and Latin-America. His work is a poignant reminder that the digital world—the internet, cryptocurrencies, NFTs— is very much physical in its reliance on rare minerals such as lithium and cobalt, the extraction of which inflicts incalculable damage on the environment. 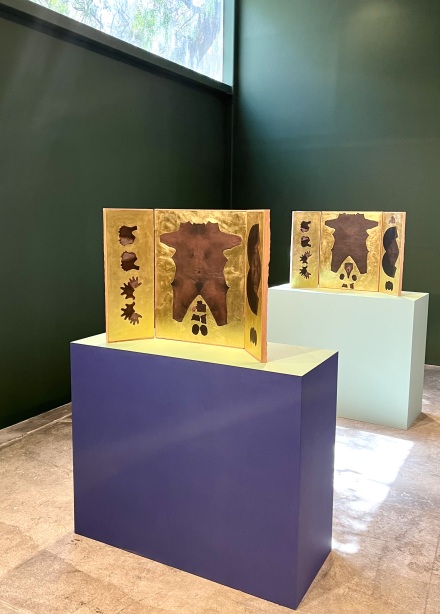 In its garden, LABOR unveiled a new pavilion for art and design in collaboration with AGO Projects, a design-centered gallery. Designed by the architect duo PedroyJuana, the geometric pavilion—with its angular roof and streaming light—is built with recycled compressed wood and houses works by Alma Allen, Lanza Atelier and Luis Úrculo. PedroyJuana have previously designed a courtyard pavilion for MoMA PS1 in Long Island City, New York. 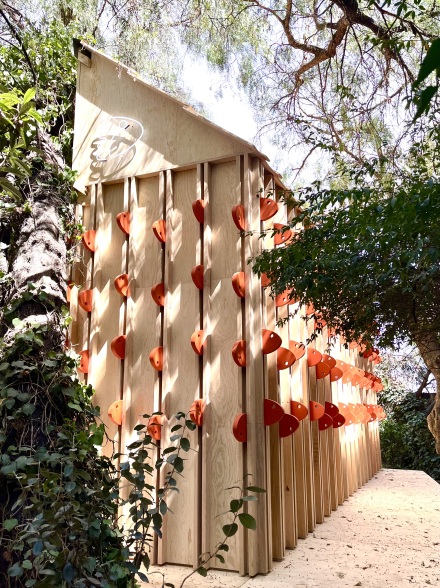 An ambitious curatorial project turned satellite art exposition now in its 9th year, Salon Acme brought together a range of young and emerging artists in a sprawling colonial casona, one of the largest Porfirian-era houses in Mexico City. It is a labyrinthine space connected by narrow corridors that converge into a central courtyard with a massive mural by the artist Yann Gerstberger. The art on view oscillates between the playful and the political, with a focus on the sculptural and the tactile. 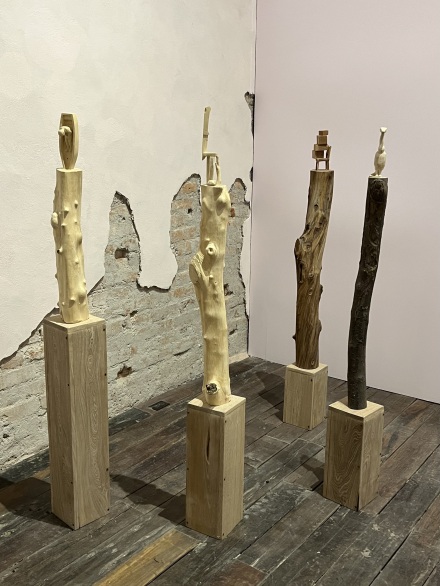 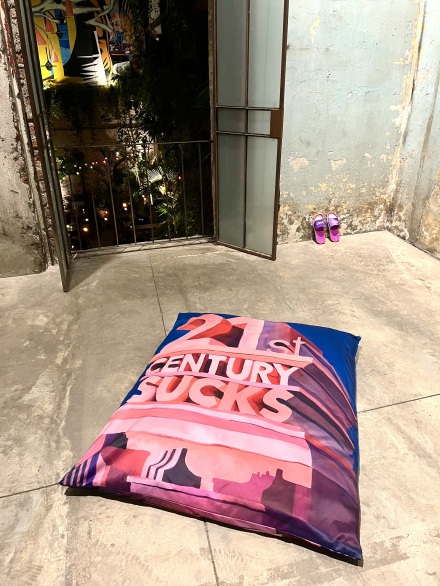 The week also saw the opening of performances, with the two notable ones being a group performance curated by Samantha Ozer at Ex Teresa Arte Actual and Torre de Sonido, a sound performance organized by Materia. At Ex Teresa Arte Actual, “artists Alejandro Chellet, Miao Jiaxin, and Verónica Peña responded to the architecture of the former church and considered how place grounds experience and how our environments mediate our connection with ourselves and others,” Ozer told Art Observed. The sound performance and art installation Torre de Sonido, took place at the towering, habitable sculpture created by the Uruguayan artist Gonzalo Fonseca as part of Ruta de la Amistad built for the 1968 Olympics. Materia invited Sound + to present a performance inside the tower with the sound artists SITES, Moisés Sacal Hadid and Ramón Saturnino, whose structure became a natural acoustic amplifier. Using custom-built sound processing tools and machines, the artists recorded the sounds enveloping the tower, as well as the sounds emanating from the audience and the structure itself. As told by Materia, this multifaceted project represents the reclamation of the cultural islands remaining in a city fragmented by relentless urbanization. 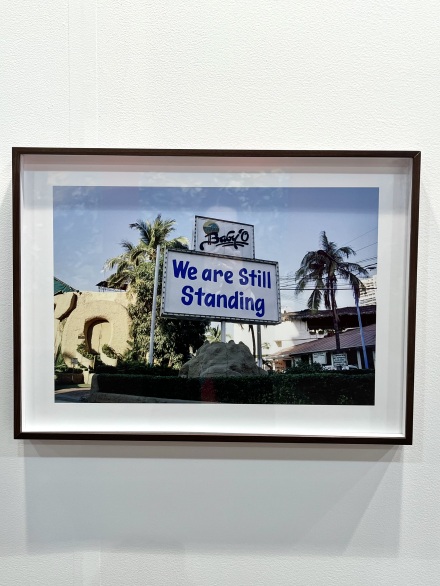 This entry was posted on Tuesday, February 15th, 2022 at 6:29 pm and is filed under Art News, Featured Post, Show. You can follow any responses to this entry through the RSS 2.0 feed. You can leave a response, or trackback from your own site.