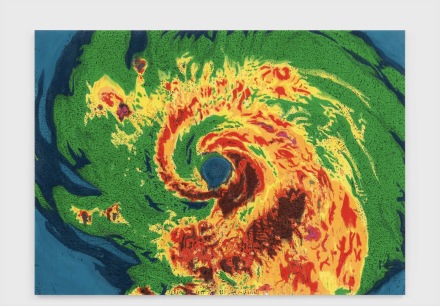 This month in New York, David Zwirner opens a show of new work by Nate Lowman, continuing the artist’s inquiries of the languages and images of modernity. Lowman has become known for deftly mining images culled from art history, the news, and popular media, transforming visual signifiers from these distinct sources into a diverse body of paintings, sculptures, and installations. That mode takes center stage here, with a series of works that draw from meteorological readouts, embellished Xeroxes, and other interpolations of technological and technical images. 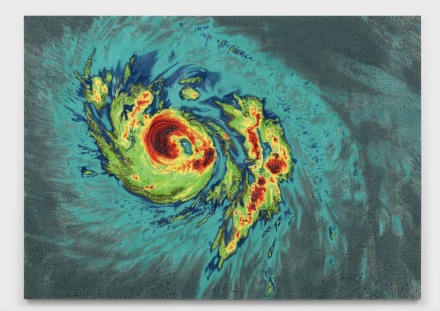 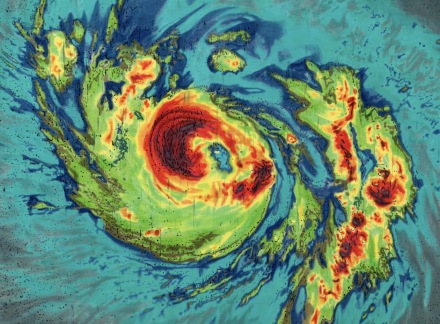 Since the early 2000s, the artist has continually pushed the boundaries of his multimedia approach with works that are at turns critical, humorous, political, and poetic. In his work, Lowman stages an encounter with commonplace, universally recognizable motifs, questioning and revisiting their intended meanings while creating new narratives in the process. This show continues that mode, featuring a series of new large-scale, vibrantly saturated paintings that depicts “false color” satellite renderings of hurricanes which have struck the United States in recent decades with increasing frequency and devastation, continuing the artist’s ongoing interest in this imagery. Lowman examines the painterly possibilities afforded by their rendered, non-referential colors, devised to highlight variations in cloud temperature. Overlaid with black dotted and gestural markings akin to those from a blurred Xerox, the resultant canvases play on the tensions between the technological and the painted image, and representational imagery and pure color.

These works engage in a dialogue with art-historical precedents and influences that range from American pop art and appropriation, and the unconstrained abstraction of color field painting, while remaining inextricably linked to a contemporary sociopolitical context. While scientific and technological, these images ultimately function in the public media as abstract, iconographic stand-ins for the violence and devastation they represent; they are universally recognized and understood, despite their formless inaccuracy, as representations of real events. Ranging from Hurricane Andrew, which struck the US in 1992 during the George H. W. Bush presidency, to the more recent Sandy, Florence, Irene, Irma, and Maria, these destructive natural disasters not only highlight the effects of climate change, but also reveal the deeply rooted economic and racial disparities of those affected by their devastation. Lowman’s interest in satellite renderings of hurricanes began in 2011 with a painting depicting Hurricane Katrina, and continued in 2017 with a small group of related canvases. The new paintings in the exhibition present a focused engagement with this iconography and its relevance. Seen together, these works reflect the artist’s fascination with the representation of America and its contradictions and obsessions, offering a complicated image of the nation. 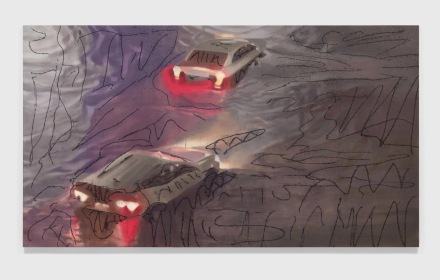 Also included will be a large-scale painting depicting an image of cars stranded at night in a recent flood in Yonkers, New York, drawn from a spectator’s recording of the event that was circulated in the media. Taking the impacts of climate crisis at each germinal stage of threat, and at their natural conclusions, Lowman poses a series of questions on a new imagistic landscape, one of immense threat to the natural landscape, and to its inhabitants.

This entry was posted on Wednesday, March 23rd, 2022 at 12:00 pm and is filed under Art News, Featured Post, Show. You can follow any responses to this entry through the RSS 2.0 feed. You can leave a response, or trackback from your own site.