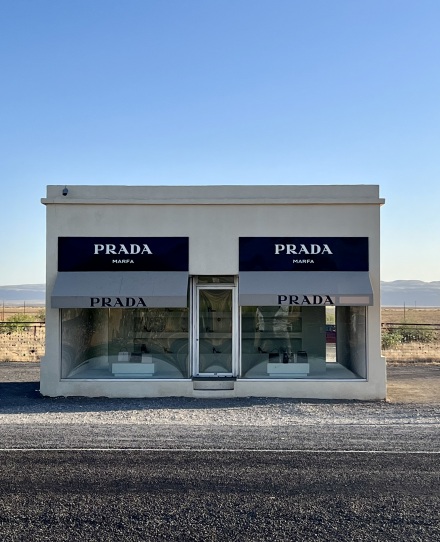 Driving down the interminable Highway 90, one eventually hits upon Marfa, a remote West Texas town that materializes out of the vast expanse of desert landscape, flanked by distant red earth mountains and mesas on either side. The only harbinger of the town’s existence is the iconic—and no longer sarcastic—Prada Marfa store, an installation built by Elmgreen & Dragset some forty minutes outside of town.

Over the years, Marfa has become an improbable art destination, drawing a cast of artworld characters seeking creative inspiration. The fascination with the town is tied in part to artworld lore, and is sustained by the vibrant creative ecosystem that has emerged here since the 1970s. In 1971, drawn by the vastness of the Western lands and the gradients of its unobstructed light, Donald Judd left Manhattan behind and made the trek to Marfa, taking over decommissioned Army storage depots in the center of town and repurposing them into his studio and residence, known today as The Judd Foundation. 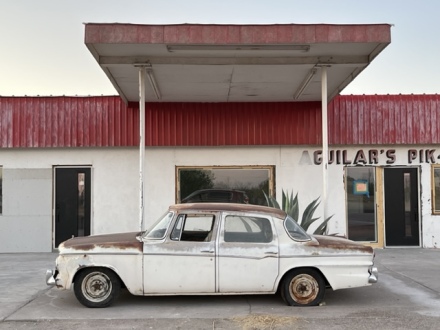 The ongoing interest in Marfa has most recently coalesced around Marfa Invitational, an intimate but ambitious art fair that just concluded its third year. The fair was founded in 2019 by the artist Michael Phelan and his wife, gallerist and art-advisor Melissa Bent, who settled in Marfa after moving here from New York City in 2014. The main fair takes place at the Saint George Hall in the center of town and integrates satellite exhibitions at local galleries, creating a constellation of art and activity. Beyond the exhibition openings, there was a sunset cocktail hour at the Perry Ranch, late nights at the local saloons, a cookout at a ranch in nearby Valentine, and the Cynthia Rowley ‘runway show,’ where cowgirls on horseback were the models. Next year, Marfa Invitational will expand into its new year-round home as part of the Marfa Foundation, an interdisciplinary arts and cultural foundation set on five acres just outside the main stretch of town.

Despite its growing popularity, Marfa is still a quintessential West Texas town—nondescript at first glance—whose charm unfolds gradually, revealing a tight-knit community of artists and creatives, multi-generational ranchers, cowboys, and those who seek space and solitude. In many ways, its stripped-down simplicity evokes a stage set, a backdrop onto which one can project innumerable creative fantasies. “Marfa is a blank canvas, a place where you can create different realities,” Phelan remarked. 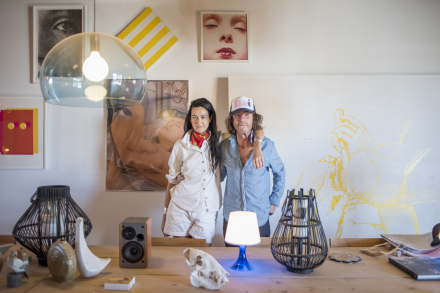 At the main fair held in Saint George Hall in the center of town, a selection of eleven galleries each presented works by a single artist, a format that is a welcome change from the overwrought fairs that are more common today. Nino Meir, a Los Angeles-based gallery, showed neo-anthropological sculptures in quartz, sandstone, and diabase, a type of volcanic rock, by the German artist Stefan Rinck. Emma Stern’s color-saturated paintings of lackadaisical mermaids in ranging expressions of ennui were on view at Half Gallery, and impressionistic paintings by the self-taught Italian artist Vera Girivi were shown at James Barron Art. 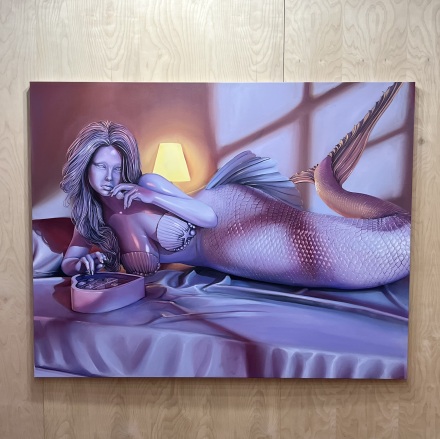 Emma Stern at Half Gallery 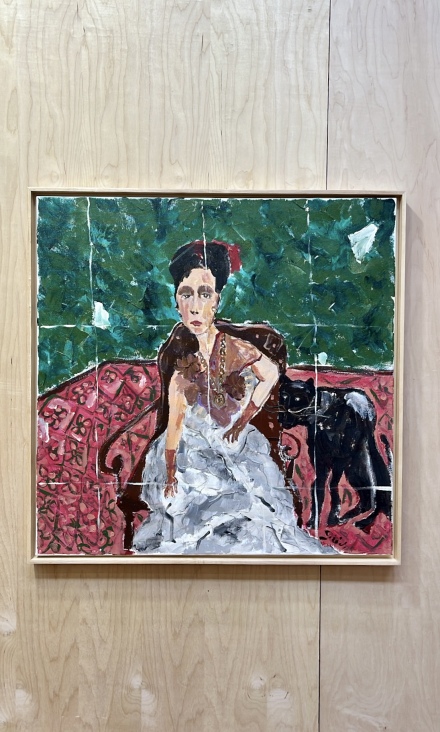 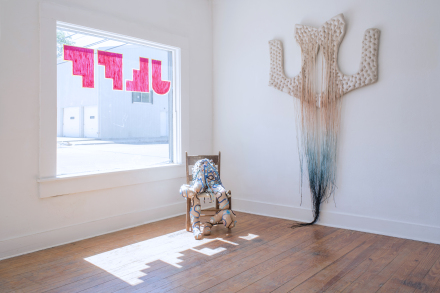 At Jeff Marfa, a gallery founded by Willy Somma, a three-woman group show is on view. Titled Soft Anatomy, the show presents works by Amy Butowicz, Victoria Dugger, and Aurora Pellizi—artists working across painting, sculpture, and textile to create colorful tactile works that seem to inhabit a world of their own and which embody a self-assertive yet playful, soft-around-the-edges corporeality. It is a show that is particularly apt in today’s political climate that sees challenges to the autonomy and dignity of the female body. “I was interested to see these works together to understand how women artists are creating a more expanded gaze, and how we represent our times and each other,” Somma told Art Observed.

Amy’s colorful surrealist sculptures are made of resin and plaster and look like they will become animate at any given moment, running off on their spindly legs. Aurora’s textile works are rooted in the cosmological, grappling with conceptions of the earth, landscape, and fertility rites. Using traditional craft techniques such as felting and weaving that she learned from indigenous communities in her native Mexico, Aurora creates tapestries that evoke a distinct ancestral female lineage in which life, death, and rebirth are interwoven. Meanwhile, Victoria’s work is grounded in the particular experience of living in a disabled body as a young Black woman. Her soft hand-sewn sculptures, slouched in chairs throughout the gallery, depict cartoonish anthropomorphic limbs adorned with beadwork, pearls, and tassels. 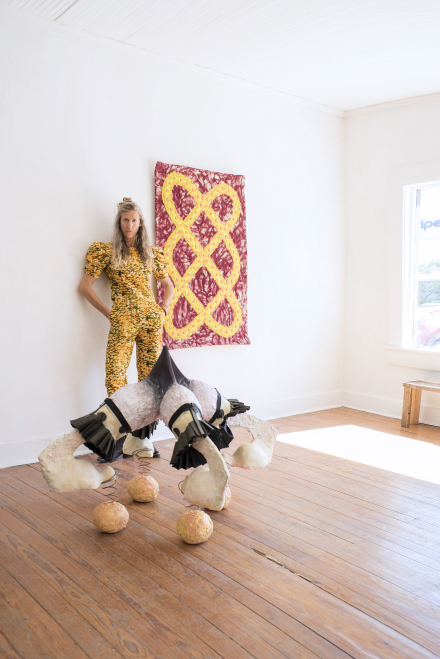 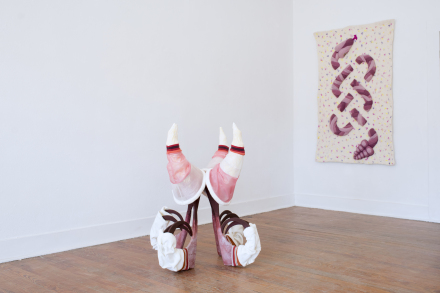 Los Angeles-based Farago Gallery and Tiwa Select partnered to present a show of their own in Marfa, taking over a hundred-year-old single-room house that served as the perfect backdrop to their intimate and understated show. Quaint and exuding a certain pastoral austerity, the low-key presentation featured works by mostly self-taught and under-recognized artists and makers that include Jim McDowell, Louis Mueller, Sandú Darié, Michael Lindsay-Hogg, E’wao Kagoshima, Jeremy Schipper, and John Kayser. Their curatorial choice proved to be successful—the works complemented the homestead setting and scrappy go-it-alone ethos of the town, and West Texas more broadly. Anything more would have been less. 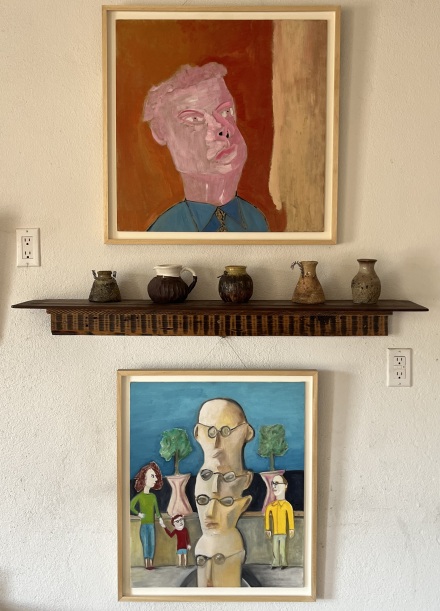 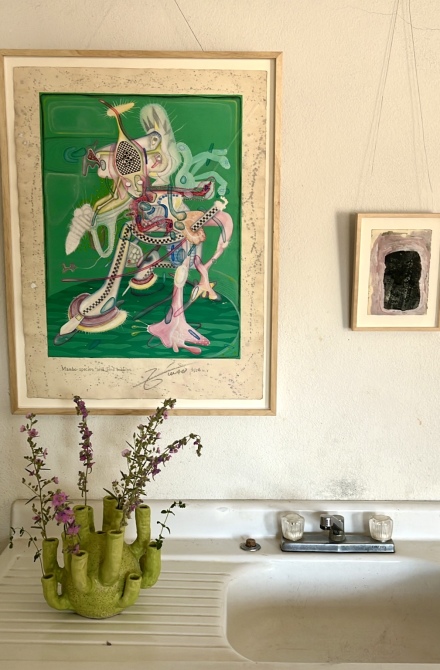 Occupying a small, white residential house with a tree-shaded front yard, Exhibitions 2D is an elegantly-curated gallery featuring works that emphasize minimalist drawing and sculpture. Works in a predominantly black and white palette dominate the space. Interspersed throughout the gallery are sculptural works such as the hefty forged iron objects by John Robert Craft, which draw their inspiration from the hard manual labor of life on the ranch. Also on view are solid graphite works by Susan York and Gloria Graham’s complex geometric paintings that are ‘motivated by a fundamental fascination with the patterns revealed by atomic microscopes.’

Underscoring its place as a center of the nation’s contemporary art scene, and its continued role as a site for discovery and experimentation, this year’s edition of the Invitational hints at big things ahead for the upstart event and its community of young galleries and artists. With another year already in the works, one should expect the Marfa Invitational to continue its role as a fixture both in the small Texas town, and at large. 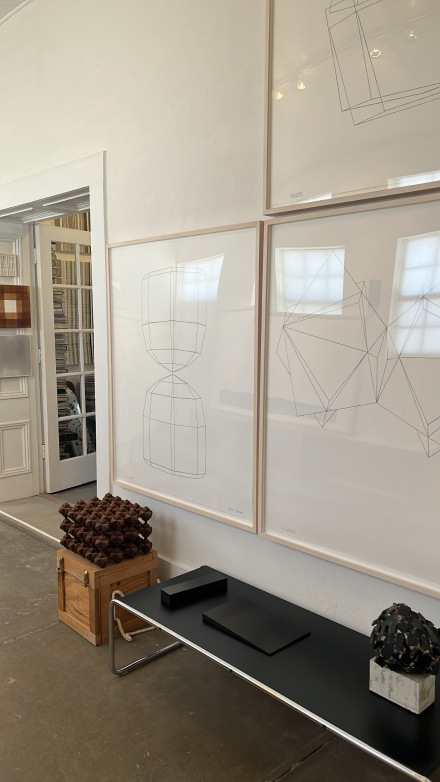 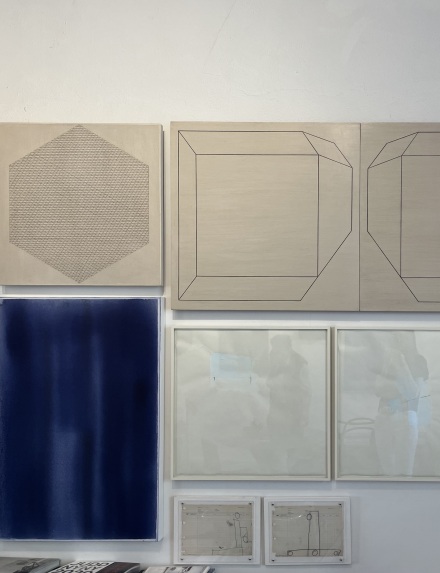 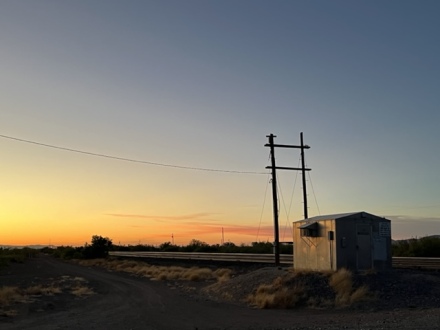 This entry was posted on Friday, May 27th, 2022 at 12:00 pm and is filed under AO On Site, Art News, Featured Post. You can follow any responses to this entry through the RSS 2.0 feed. You can leave a response, or trackback from your own site.