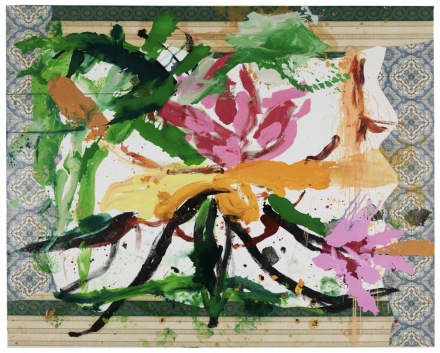 Vito Schnabel Gallery presents its first solo exhibition with noted Spanish artist Jorge Galindo this month, debuting a new suite of monumental flower paintings, that continue the artist’s ongoing exploration of flora and its representation in art across centuries and genres. Titled after the small, wild vervain plant characteristic of the artist’s hometown of Madrid, Galindo’s flowers simultaneously nod to the popular Spanish street celebrations of summer– the verbenas of Spain’s capital city reinvigorate centuries-old traditions through contemporary reinterpretation. Employing a vivacious palette, Galindo’s new painted bouquets burst through their frames, exploding with color beyond the antique wallpaper borders that surround them. 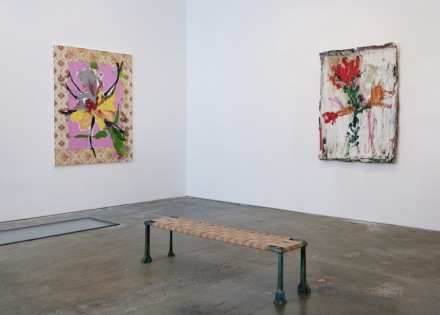 Since the early 1990s, Galindo has collected salvaged print materials — a habit inspired by visits to Madrid’s flea markets during his childhood — that range from old books, magazines, and records to vintage postcards, which he has employed as cut-outs in his collages, superimposed on his canvas, or used as preparatory studies for his paintings. He has long been attracted to the tactile material quality of paper and the possibilities it offers in dialogue with paint and gesture: either to impart figuration in an abstract canvas or abstract the figurative body in an image. His earliest works were inspired by the Dadaists, notably Kurt Schwitters and Francis Picabia, as well as Picasso’s compositions in papiers collés. Throughout the three decades of his practice, Galindo’s penchant for collecting elements from his everyday environment have manifested as part of the intrinsic framework of his adroit pictorial style.

The new suite of large-scale canvases in Verbena boast a pictorial immediacy and artistic maturation in Galindo’s exploration of the floral motif. Employing rolls of wallpaper that the artist sourced from secondhand shops, markets, and antique stores, these works fuse the ornamental character of antique floral designs with the artist’s signature heady, explosive, saturated blooms. Teeming with vitality and riotous color, Olor de Noviembre (Smell of November), 2021, depicts an entanglement of foliage and stems, as if each bursting blossom was freshly-picked and gathered from a wild and vibrant abundance. The arrangement is lush and profuse, so much so that the petals Galindo renders in paint push beyond the decorative border that surrounds them. 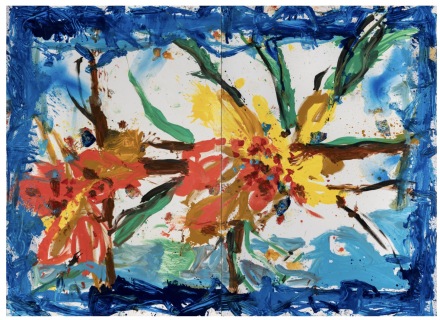 Creating a framing device that simultaneously accentuates his eruptive blooms and draws attention to itself, Galindo layers cut strips of wallpaper pasted along the edge of his canvas. The highly ornamental, decorative style of the wallpaper stands in stark contrast to the loose, unrestrained gestural brushwork of the artist’s hand. 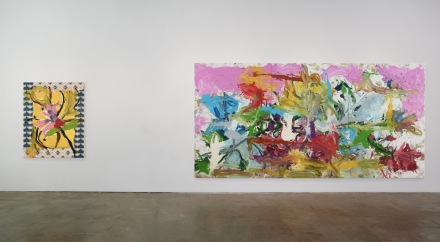 Galindo’s latest compositions on view in Verbena hint at his first flowers, which emerged from street posters and billboards he layered on canvas in 2009. In recent years, Galindo returned to the subject in a collaboration with renowned Spanish director Pedro Almodóvar; Galindo combined elements of painting, photography, and collage when he enlarged a series of Almodóvar’s still life photographs as the ground for new paintings that the duo realized together. In another series of ‘Postcard Paintings’, Galindo silk-screened vintage florals on his canvas before overpainting the compositions in layers of undulating swaths of color. Continuing to explore and manipulate the illusionary artifice of ‘old floral imagery’, Galindo joyfully animates the still life motif and genre of flower painting to the realm of gestural abstraction.

This entry was posted on Thursday, September 15th, 2022 at 12:00 pm and is filed under Art News, Featured Post, Show. You can follow any responses to this entry through the RSS 2.0 feed. You can leave a response, or trackback from your own site.