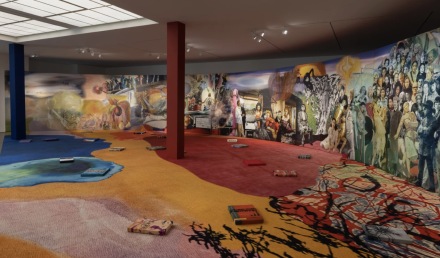 On view this month in Berlin, Esther Schipper presents Panoramism and the Abstract Sector, artist Dominique Gonzalez-Foerster’s tenth solo exhibition with the gallery. Continuing the artist’s ongoing exploration of artistic, emotional and intellectual geneaologies, extending from prior shows in 2021 and this year, the show takes the form of a 30-meter long 180°-degree curved panorama, especially conceived for the exhibition, with imagery spilling over onto a custom-printed carpet, and printed pillow books. 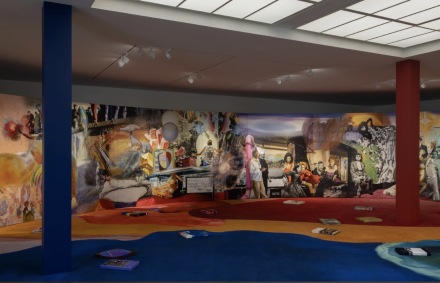 As the artist continues this exploration, her work here presents the panorama as an attempt to both transcend and reposition the panorama as a space for the transcendence and reframing of contemporary image culture, reconnecting to the legacy of early 19th century formats. The reinvents these still precursors to early cinema, restoring their visual splendor and excavating their discursive power as storytelling devices. Here, Berlin takes center stage, and its history during the 20th Century is at the core of the show. The wall is covered with lyrical abstractions in one section, and balanced by abstract expressionist gestures in another, ultimately serving as the backfrop for a number of figures posed against it. 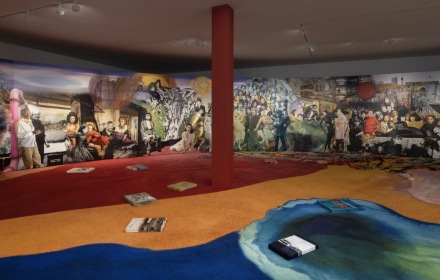 Along a temporal arc—from scenes of crowds atop the wall in November 1989 to later images of toppled sections of graffitied concrete—other locations in Berlin and protagonists from earlier moments, especially the Weimar years with its lively, transgressive, and genderbending art and theatre scenes, are interlaced. Another emphasis, signaled in the title, is abstraction, in particular abstract painting.The result is a densely layered field of references, a site where the personal and historical mingle, and ultimately seek to reframe that mode of the artistic mind at the foreground. 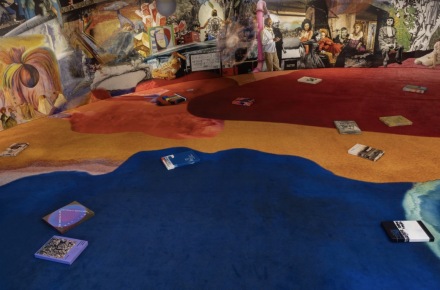 As mentioned earlier, the notion of an artistic genealogy ultimately spills out into intriguing meditations on politics, society and social awareness, and equally to international connections and global flows of data and ideas. The artist suspends Berlin within that network, even as its streets and landmarks serve as the backdrop. Once again underscoring how the global and the local work in a constant exchange, the show is a powerful continuation of the artist’s work.

This entry was posted on Tuesday, November 15th, 2022 at 12:00 pm and is filed under Art News, Featured Post, Show. You can follow any responses to this entry through the RSS 2.0 feed. You can leave a response, or trackback from your own site.