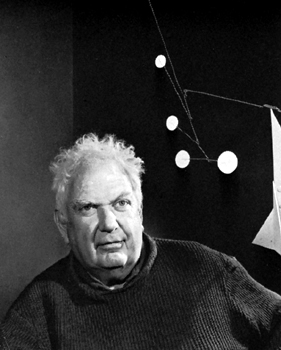 Lives and works in:

Calder, one of America’s most famous sculptors, was responsible for the invention of the mobile. His most well known work features perfectly balanced mobiles comprised of floating shapes in flat, bright colors hanging delicately by wire. They twist and turn, magically hovering in air, while spreading out from a central wire. 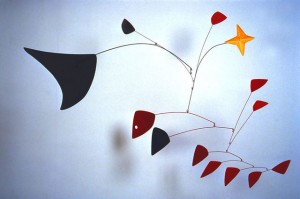 The Star, (1960) via UK
A versatile artist, he created lithographs, toys, paintings, tapestry and designed carpets. He was born the son of sculptor Alexander Stirling Calder, and began making sculptures of his own at a young age. After attending New York’s Art Students League and taking a job as a sketch artist for the National Police Gazette, he moved to Paris at the age of 26 and opened his own studio. Shortly after, having been urged by fellow sculptor Jose De Creeft and influenced Serbian toy merchants, he took to creating toys, developing his own series called Circque Calder, a combination of wire sculpture and kinetic art that resembled a miniature circus and which is currently on display at the Whitney Museum. 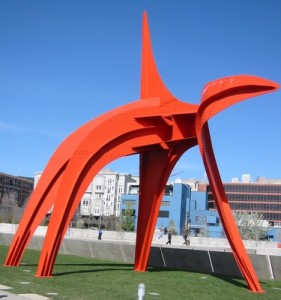 In 1927, he returned to the United States still fascinated with toys. He continued creating and the following year, he held his first solo exhibit at New York’s Weyhe Gallery, showcasing the wooden push and pull children’s toys he had created. In 1929, he expanded on the wire stylings behind Circque and exhibited his wire sculptures in Paris at Galerie Billiet. The 1930s saw him continue to put on his Circque Calder shows as well as experiment with knew, self-supporting structures called “stabiles.” His first retrospective was held in 1938 at the George Walter Vincent Smith Gallery in Springfield, Massachusetts.

In the 1950s, he began to focus on monumental sculptures, many of which would become his most famous works. He created monumental pieces for JFK airport in 1957 and UNESCO in Paris in 1958. His largest piece, “El Sol Rojo” which was 20.5 meters tall, was created for the Mexico City Olympics of 1968. Many large stabiles found home in major American cities, like “Flamingo” which was placed in Chicago’s Federal Plaza and “WTC Stabile” which stood outside 7 World Trade Center when it was collapsed on September 11, 2001. 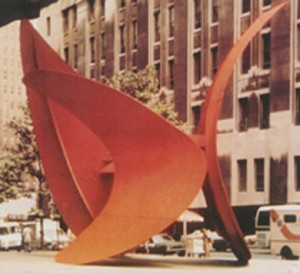 He was also commissioned by Braniff International Airways in the 1973 and 1975 to create two large-scale paintings of airplanes and was creating a third when he died in 1976. The following year, President Gerald Ford posthumously awarded him with the Presidential Medal of Freedom, the United States’ highest civilian honor. Permanent exhibitions of his work can be viewed at the Storm King Art Center in Mountainville, New York, New York City’s Whitney Musuem of American Art, The National Gallery of Art in Washington D.C. as well as the Galleria Civica d’Arte Moderna, Palazzo Collicola located in Spoleto, Italy. 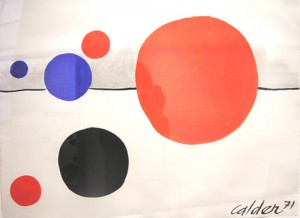