A rare pair of floral paintings by Queen Victoria will go to auction next week, expecting prices of £8,000 and £10,000, Art News reports.  END_OF_DOCUMENT_TOKEN_TO_BE_REPLACED

Iraqi-American artist Michael Rakowitz is proposing that the British Museum return one of its ancient Assyrian treasures to Iraq in exchange for the donation of his fourth plinth sculpture to the UK. “As I pondered my gift to the nation of Great Britain, I began to fantasise that it could be attached to a second gift: the return of one of the British Museum’s lamassu to the country of Iraq, to replace what was destroyed by Daesh [or Islamic State],” he writes in an open letter. END_OF_DOCUMENT_TOKEN_TO_BE_REPLACED

Art News has a piece this week discussing ongoing issues with repatriation at The Met, reviewing some disputed works still on view. “Once you know that someone is acquiring artifacts without looking too closely as a source, the first thing you should do is look deeper,” says Erin Thompson, an associate professor of art crime at John Jay College of Criminal Justice. END_OF_DOCUMENT_TOKEN_TO_BE_REPLACED

Aitken’s style of art lingers in a realm between popular culture and media art. He has taken the liberty of incorporating video into much of his work, revealing a wealth of intensities. “There is no linear narrative in Aitken’s videos; the story line is disjointed both in terms of the films’ structure and sequence of images, as well as in their prism-like projection.” Grosenick, pg.20

Atkins is not only a videographer, but a photographer as well. He creates photographs influenced by epic road movies, as well as photographs manipulated through the use of a computer.  Atkins’ photographs “kaleidoscopically fragment their motifs, thus attempting to translate the principle of his video projections into a single flat surface.” Grosenick, pg. 20

“He belongs to a generation of artist that enriched the presentation of the medium of video. Aitken’s work questions nature and civilization as well as people and their relationship to time and space. Obsessed with the idea of present time, Aitken refers to his films and installations as being pure communication. In the process, he utilizes the vocabulary of Hollywood and advertising films. Alongside his freelance activities as artist and photographer, Doug Aitken is also known for his video clips, completed for artists such as Iggy Pop and Fatboy Slim.” -Media Art Net 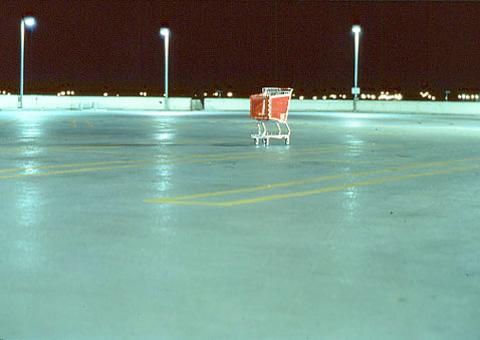 Aitken is currently participating in the Life on Mars exhibit at the Carnegie Museum of Art in Pittsburgh, Pa.