A recently unearthed Michelangelo sketch, considered to be the artist’s first nude, has sold  at Christie’s Paris for a record 23 million euros ($24 million). “Michelangelo has decided to make the figure into something that corresponded more to his aesthetic by making him much more robust and monumental, while at the same time keeping the fragility of the figure, who is exposed and shivering” as he awaits baptism,” says Christie’s Old Masters expert Stijn Alsteens. END_OF_DOCUMENT_TOKEN_TO_BE_REPLACED

The Jean-Michel Basquiat work from the collection of Japanese billionaire Yusaku Maezawa had a strong return to auction last night at Phillips, where it achieved $85 Million, part of a total sale of  $224.9 million, the highest in the company’s history.  END_OF_DOCUMENT_TOKEN_TO_BE_REPLACED

The Independent Art Fair will launch a new fair in September this year that will focus on 20th Century Works. “Over the years, there has been a shift, with next-generation dealers showing a more diverse group of artists and territories, geographically, socially, politically,” says Independent director Elizabeth Dee. “They are looking forward and looking back, saying, ‘We need to have a canon that looks like our program.’” END_OF_DOCUMENT_TOKEN_TO_BE_REPLACED 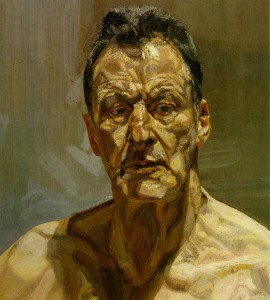 Lucian Freud is the grandson of Sigmund Freud. He began drawing profusely around the age of 10. Early paintings of Lucien Freud were influenced by surrealism, featuring people in strange compositions. For the rest of his career, he would focus on portraits, most of them nudes. Style would also develop from thin, flat paint to thick, less blended strokes. 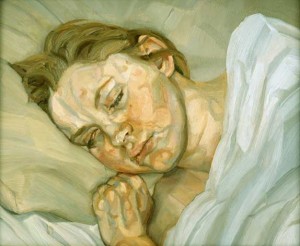 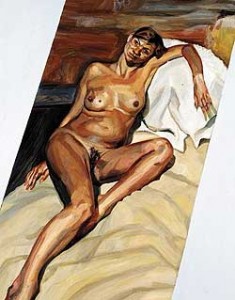 Freud’s subjects are often the people in his life; friends, family, fellow painters, lovers, children. To quote the artist: “The subject matter is autobiographical, it’s all to do with hope and memory and sensuality and involvement, really.” He has painted Francis Bacon and Frank Auerbach. His oeuvre also includes a controversial portrait of Queen Elizabeth II, various ex-wives, countless dogs, his assistant, and a pregnant Kate Moss. 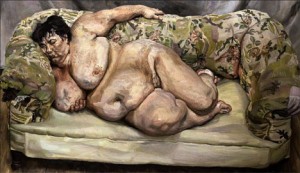 On the canvas, Freud tends to place the most emphasis on the sitter’s face or body – not shy about depicting bold postures or expressions. He is known for attaching additional pieces of canvas after the body is finished to accomodate it. Freud is also a notoriously slow painter, which has been said to cause his subjects chagrin. 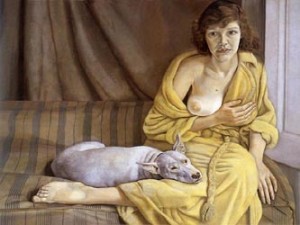 He was shortlisted for the Turner Prize in 1988 and 1989, awarded annually to a British artist under the age of 50 for outstanding work in the previous year. Freud’s retrospective at the Tate Museum in 2002 garnered much attention in the press and the general public – he is regarded as one of Britain’s most popular artists.

Now in his 80’s, Lucian Freud still dedicates himself to his chief obsession, art.