A rare pair of floral paintings by Queen Victoria will go to auction next week, expecting prices of £8,000 and £10,000, Art News reports.  END_OF_DOCUMENT_TOKEN_TO_BE_REPLACED

Iraqi-American artist Michael Rakowitz is proposing that the British Museum return one of its ancient Assyrian treasures to Iraq in exchange for the donation of his fourth plinth sculpture to the UK. “As I pondered my gift to the nation of Great Britain, I began to fantasise that it could be attached to a second gift: the return of one of the British Museum’s lamassu to the country of Iraq, to replace what was destroyed by Daesh [or Islamic State],” he writes in an open letter. END_OF_DOCUMENT_TOKEN_TO_BE_REPLACED

Art News has a piece this week discussing ongoing issues with repatriation at The Met, reviewing some disputed works still on view. “Once you know that someone is acquiring artifacts without looking too closely as a source, the first thing you should do is look deeper,” says Erin Thompson, an associate professor of art crime at John Jay College of Criminal Justice. END_OF_DOCUMENT_TOKEN_TO_BE_REPLACED

image via IndieWire
b. 1967
Lives and works in:

Barney is a contemporary artist who works in several mediums including film, sculpture, photography, drawing and performance art. His compositions are often overly decadent, and even fantastical. The involve a mysterious symbolic system that alludes to associative dream states as described by Freud, offering a living and photographed quality, as opposed to a painted or surreal.

His works have been exhibited around the globe and has gained much attention thanks to his “Cremaster” film series. He is featured in the permanent collections of the Guggemheim, MOMA New York, the Art Institute of Chicago, San Francisco Museum of Modern Art and several others.
Many of his pieces incorporate a performance aspect, including his 2006 “Drawing Restraint 13: The Instrument of Surrender” in which the artist
dressed like General Douglas MacArthur and walked into a vat of petroleum jelly.
He lives with his partner, Icelandic singer Bjork, and their child. 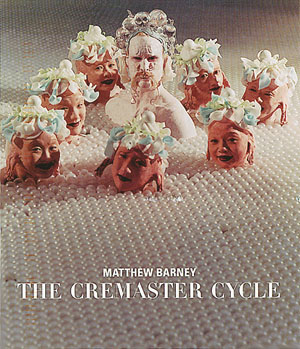 The Cremaster Cycle- via www.babylonberlin.de