Luhring Augustine will open its new space in Tribeca on May 1st, a 3,500 square foot space on White Street.  The inaugural exhibition will showcase a selection of sculptures and works on paper by the late Lucia Nogueira.  END_OF_DOCUMENT_TOKEN_TO_BE_REPLACED

Grayson Perry has won the prestigious Erasmus Prize, one of the Netherlands’ highest honors. “I always love a medal. I’ll probably design an outfit to match,” he said.  END_OF_DOCUMENT_TOKEN_TO_BE_REPLACED

The 2020 Getty Medal, the highest honor given by the J. Paul Getty Trust, will go to philanthropist Alice Walton, artist Martin Puryear, and scholar Kwame Anthony Appiah. “The Getty Medal recognizes excellence and impact in cultural areas that help expand our understanding and appreciation of the world around us,” says David Lee, chair of the Getty Board of Trustees. “This year we are thrilled to honor three influential and transformative leaders.” END_OF_DOCUMENT_TOKEN_TO_BE_REPLACED 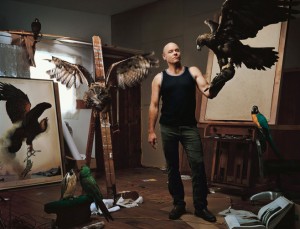 Walton Ford was born in 1960 in Larchmont, New York. Ford graduated from the Rhode Island School of Design with the intention of becoming a filmmaker, but later adapted his talents as a storyteller to his unique style of large-scale watercolor. Blending depictions of natural history with political commentary, Ford’s meticulous paintings satirize the history of colonialism and the continuing impact of slavery and other forms of political oppression on today’s social and environmental landscape. Each painting is as much a tutorial in flora and fauna as it is as a scathing indictment of the wrongs committed by nineteenth-century industrialists or, locating the work in the present, contemporary American consumer society. An enthusiast of the watercolors of John James Audubon, Ford celebrates the myth surrounding the renowned naturalist-painter while simultaneously repositioning him as an infamous anti-hero who, in reality, killed more animals than he ever painted. Each of Ford’s animal portraits doubles as a complex, symbolic system, which the artist layers with clues, jokes, and erudite lessons in colonial literature and folktales. Walton Ford is the recipient of several national awards and honors including a fellowship from the John Simon Guggenheim Memorial Foundation and the National Endowment for the Arts. Ford’s work has been featured at Bowdoin College Museum of Art, the Southeastern Center for Contemporary Art, the Whitney Museum of American Art at Champion, and the Forum for Contemporary Art in St. Louis. After living in New York City for more than a decade, Walton Ford relocated his studio to Great Barrington, Massachusetts. Ford and his family reside in upstate New York.